A Trip Out East

Last month, Miles and I travelled out to the east coast of Canada, to visit my mother, who is helping my Nana, and of course, my Nana. Nana was having surgery, so I wanted to be around to help my mother and her throughout it. Miles is a great traveller, and was happy to come along. 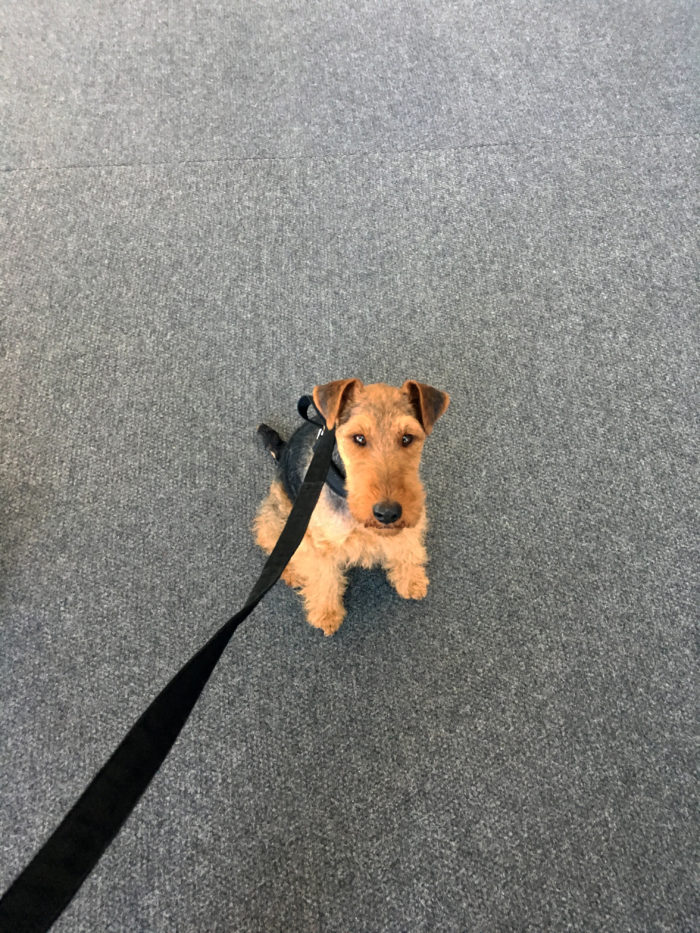 Miles must know airports by now. 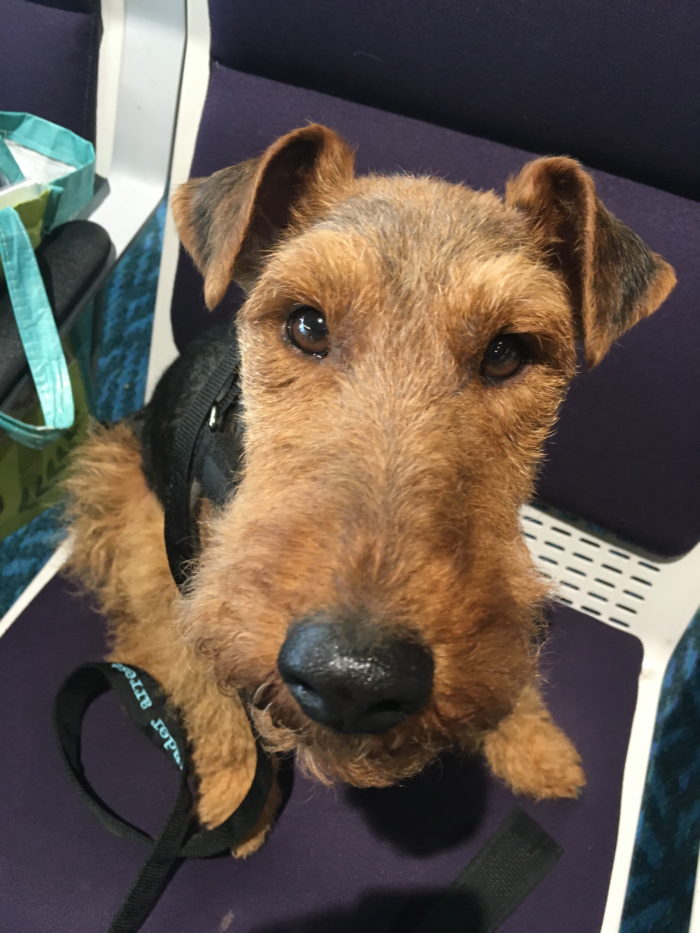 Miles snuck some airport gate chair time before boarding. This was taken moments before he assumed the “complementary airline pretzels? terrier style!” pose he is so good at. 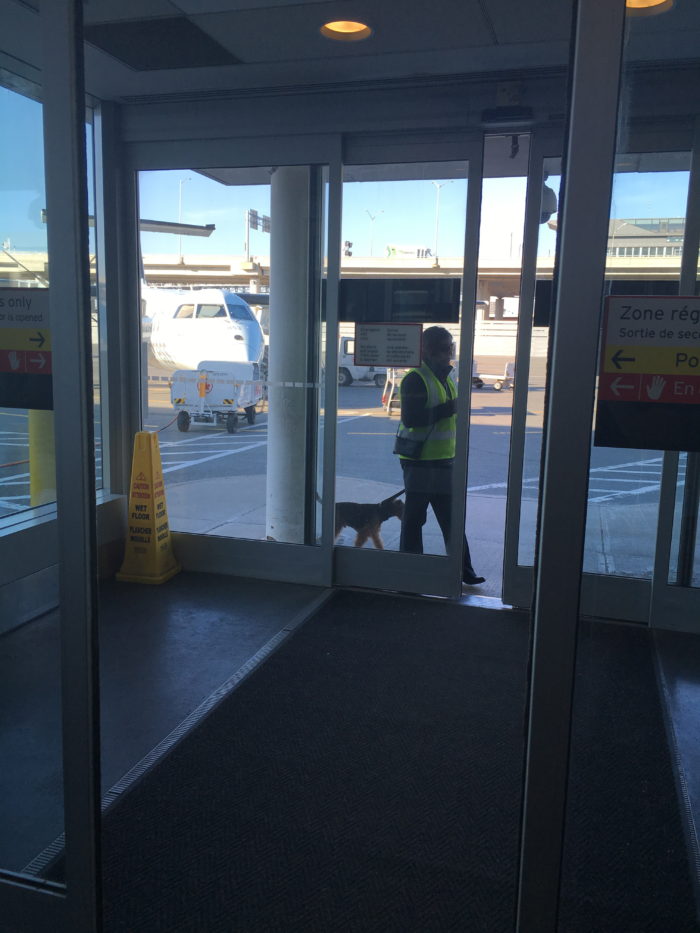 Our longest flight, the cabin was so hot! Miles drank lots of water, so when we landed in Toronto, the ladies at the gate took pity on Miles. Normally dogs aren’t allowed outside, but they saw he was friendly and well-trained, and one of them agreed to take Miles out. Miles was very happy! 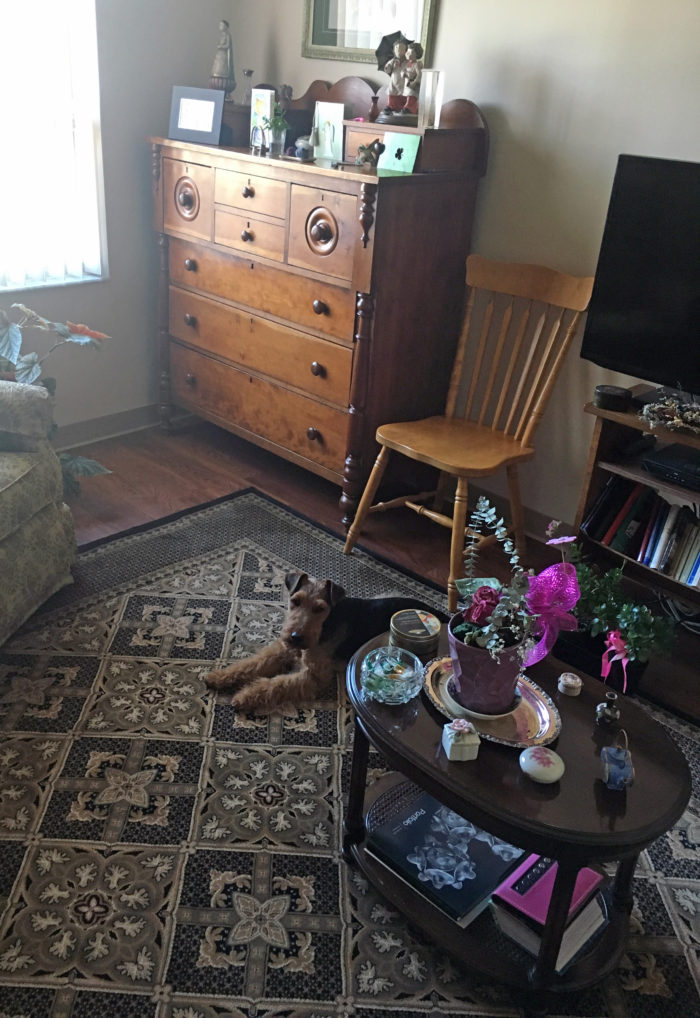 We visited Nana right away. She just moved into a retirement home earlier this year. It was nice to see that her new digs look a lot like her home did. It wasn’t easy for her, after living in her house for around 30 years. I told her how brave I think she is. 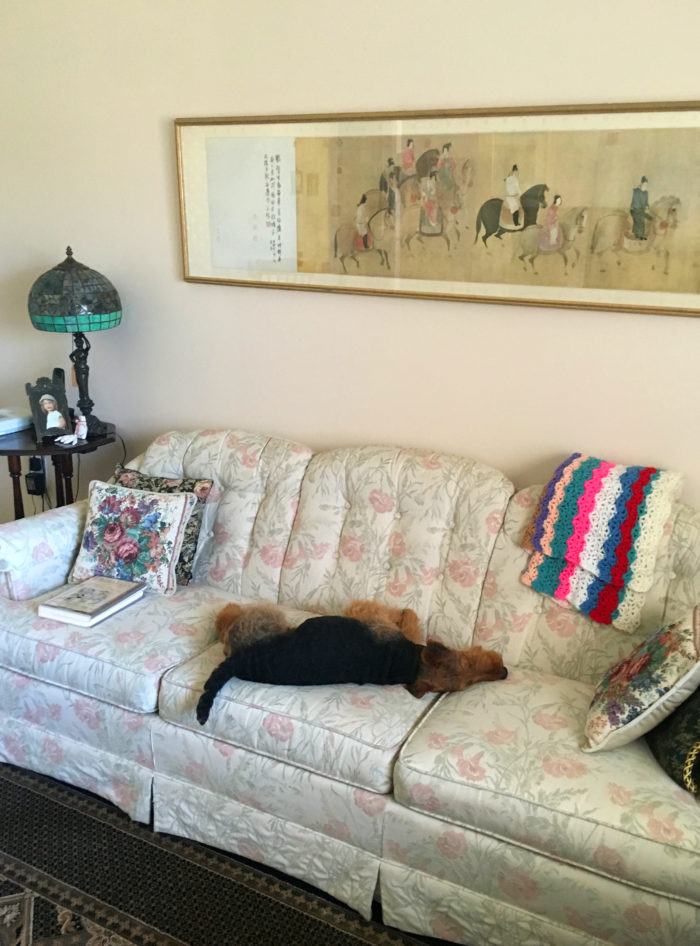 Miles was happy to enjoy a familiar couch. 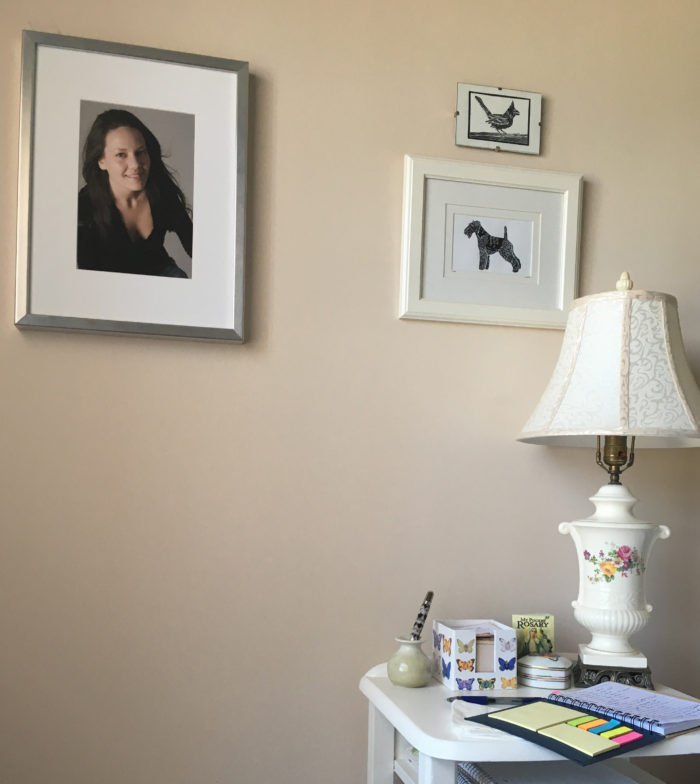 Seeing that Nana had me and Miles right by her bed made me feel very loved. 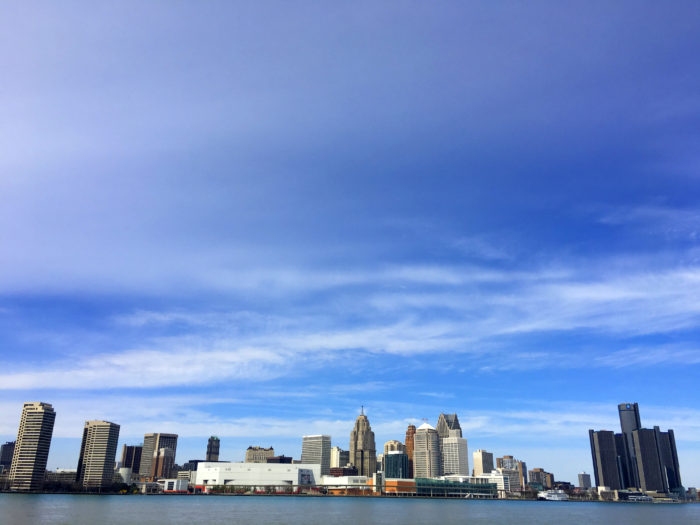 My Nana lives in Windsor, Ontario. Windsor looks right at Detroit, Michigan, and vice versa. We went for a walk along the water, and enjoyed the Detroit skyline. During prohibition, boats smuggled booze across the water! Anyway, it is a fitting place for me, because my background is half Canadian, and half American. 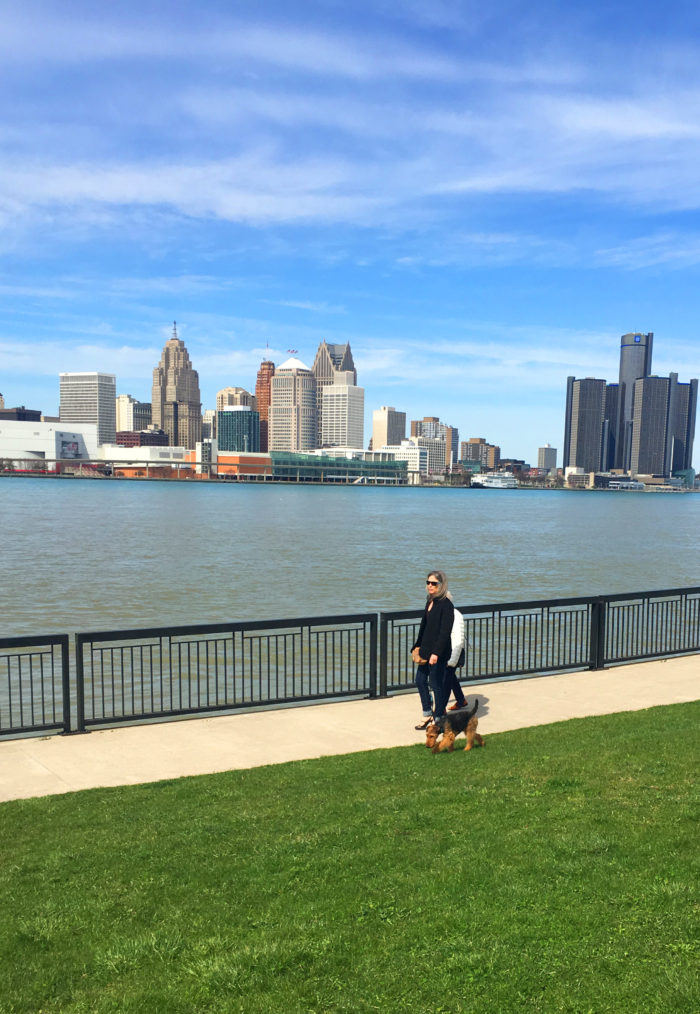 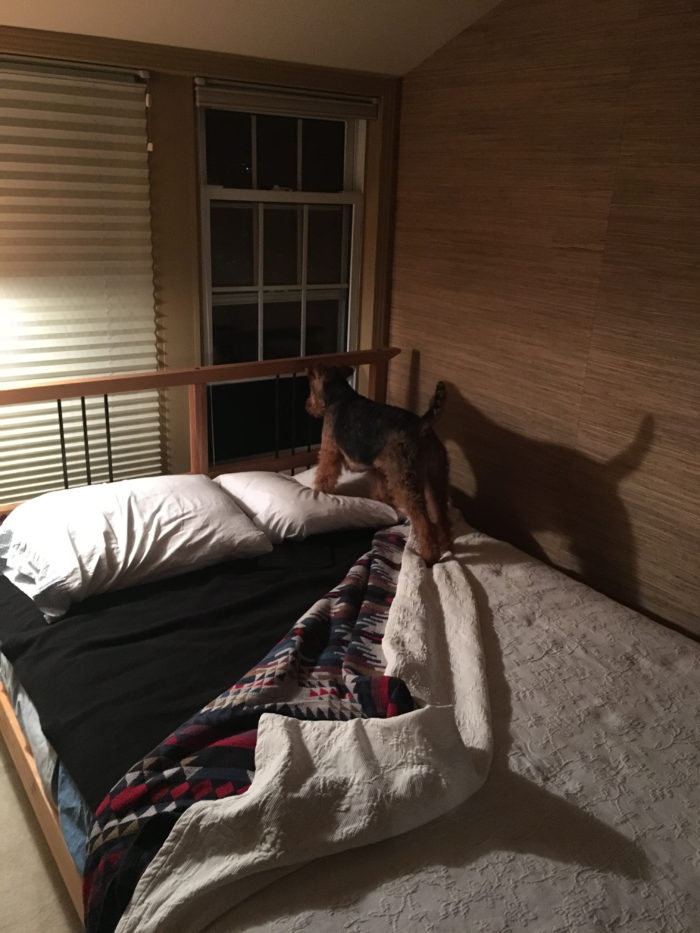 We crashed at our lakeside digs in nearby Kingsville, Ontario. Miles was immediately taken by the intense scent and sounds of the vast flora and fauna. He was on high alert, so I realized shutting the blind would be a must if I wanted to get some sleep! 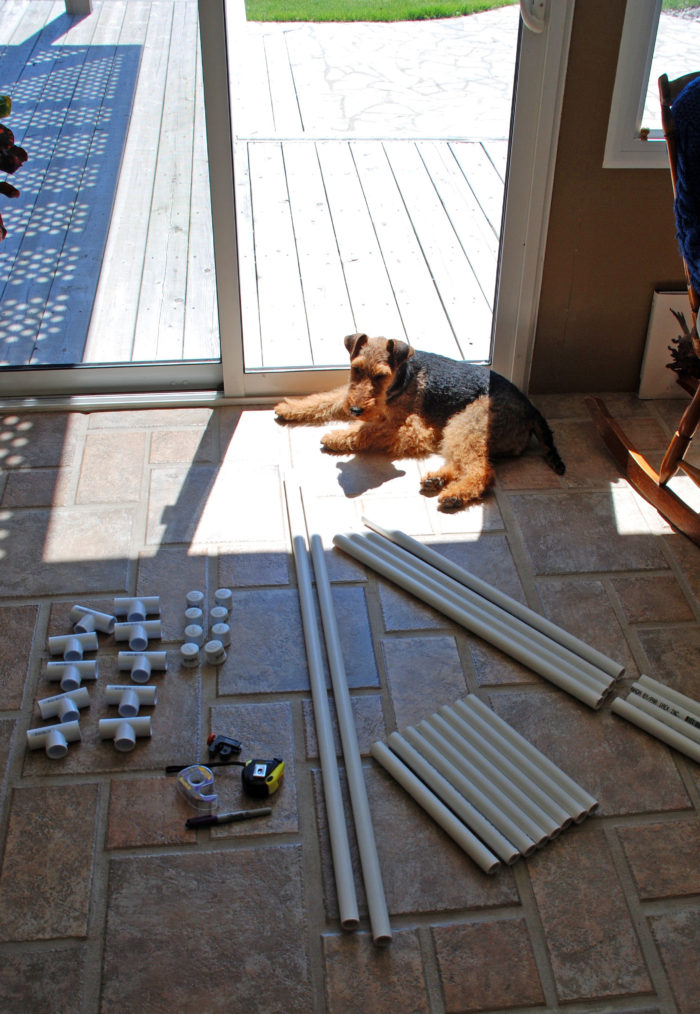 I brought work with me. I also brought with me the gumption to get some agility studying in while we were away. The second day of the trip, I zipped into Home Depot, cut up some PVC piping in record time. I made such a big impression on the plumbers that were also shopping, that they came and told me my PVC cutting technique was new to them, and impressively fast and accurate. I was embarrassed, and laughed, and they said, “no really! We mean it. Can you show us again?” Ha! Back at the ranch, I popped together two practice jumps. I’ll post the instructions I came up with later. 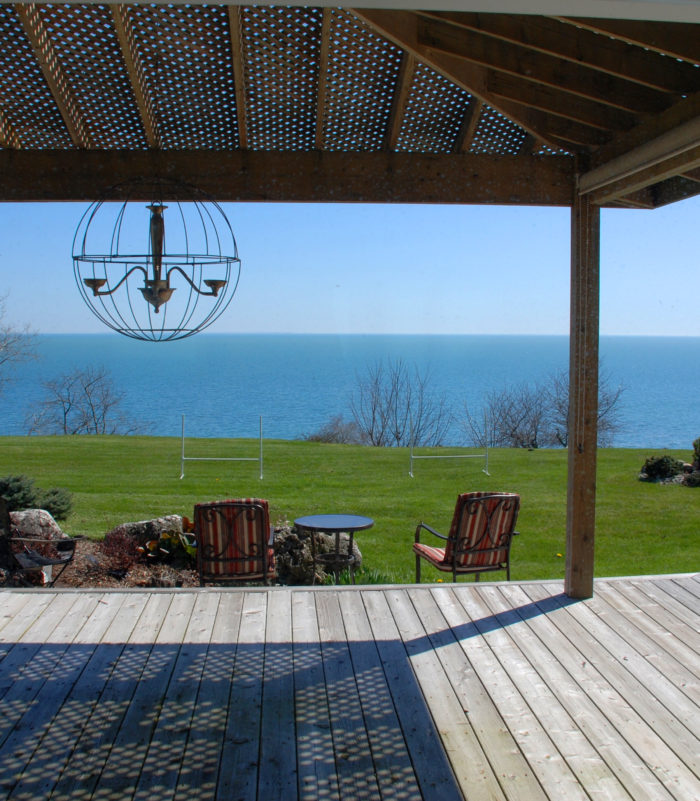 Agility by the lake! This picture looks so glamorous — in reality I soon had to switch to practicing on the other side of the place. There were many bunnies on the lakeside. Miles and I practiced backside sends, Japanese handling, and reverse spins. Thanks to a year under our belt of training with a great instructor, I am finally getting to the point where I can practice fancy moves on my own. I never imagined this day would come. 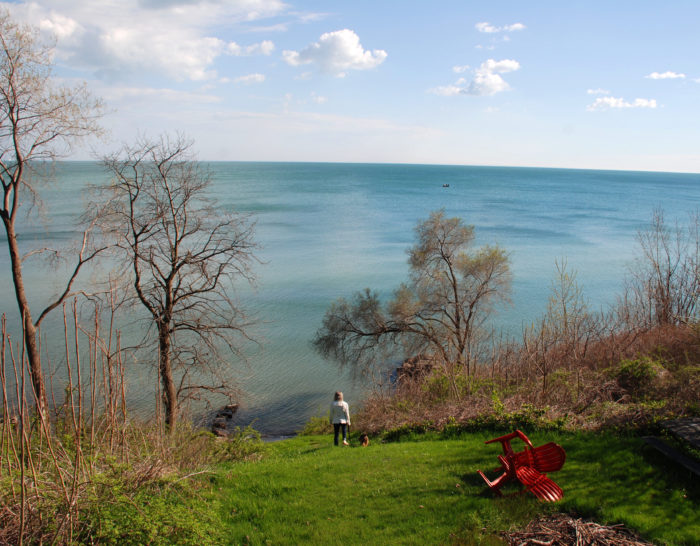 My mother took Miles down to the water. I followed behind, taking in the beautiful surroundings. Kingsville is the Southern most town in Canada. It was warm and all around stunningly scenic. 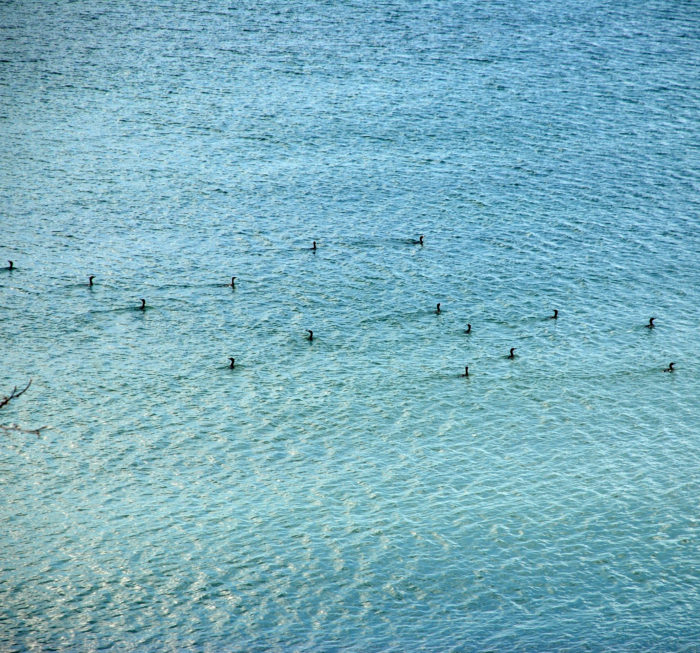 A flock of loons. Yup, if you’ve ever been to Canada, those are what the Canadian dollar are named after! 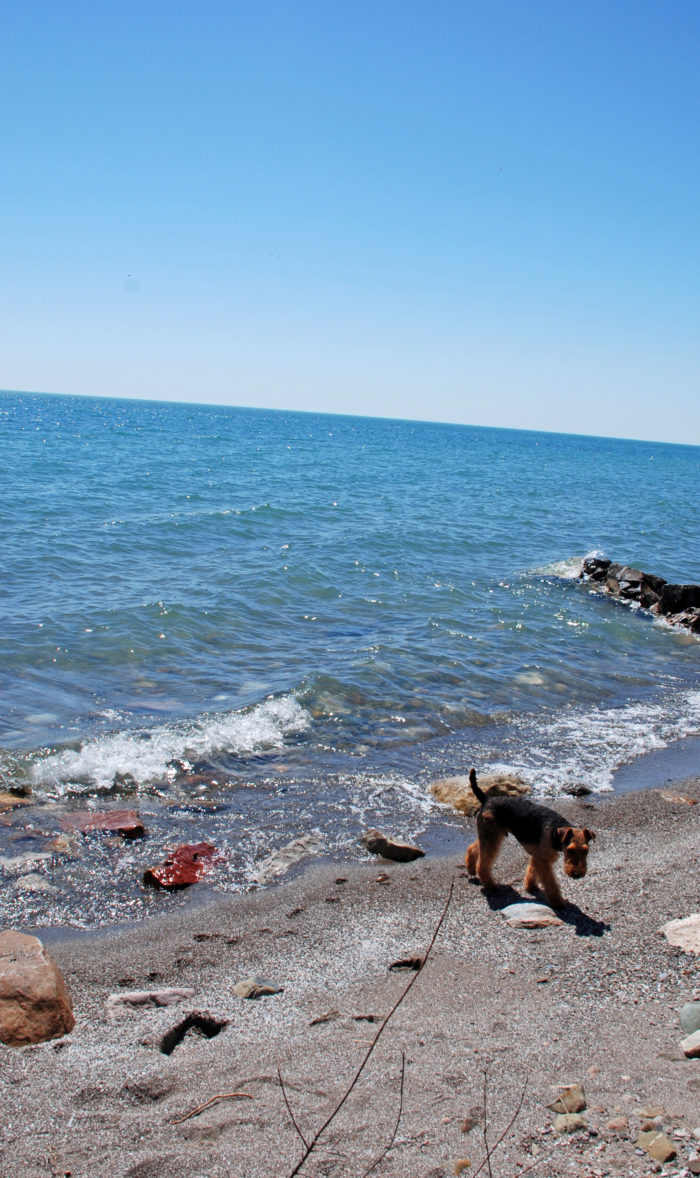 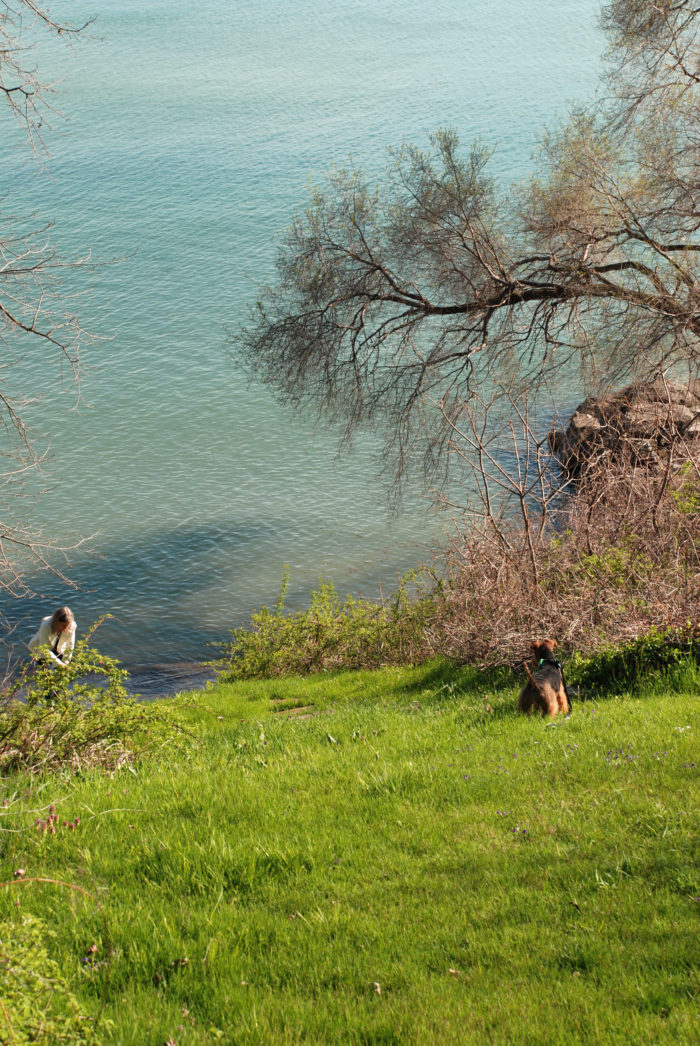 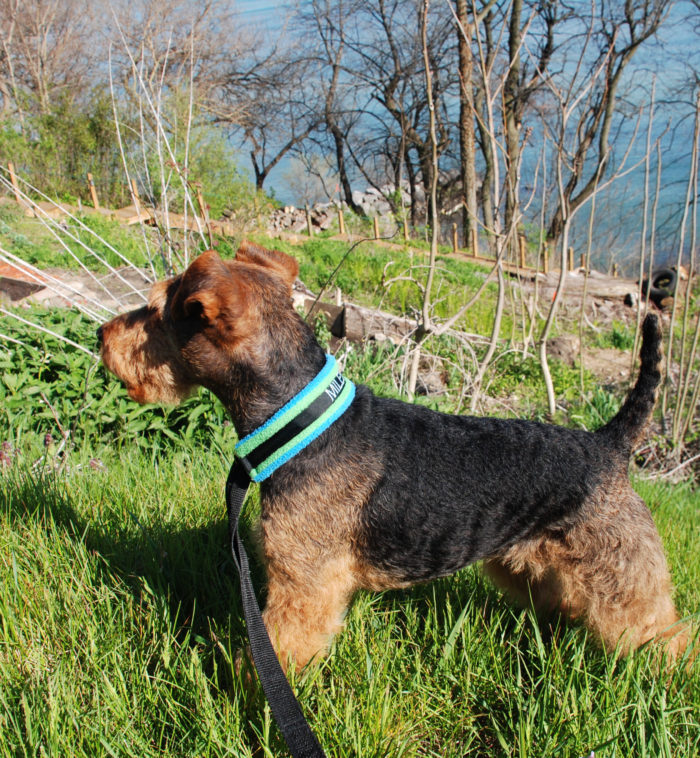 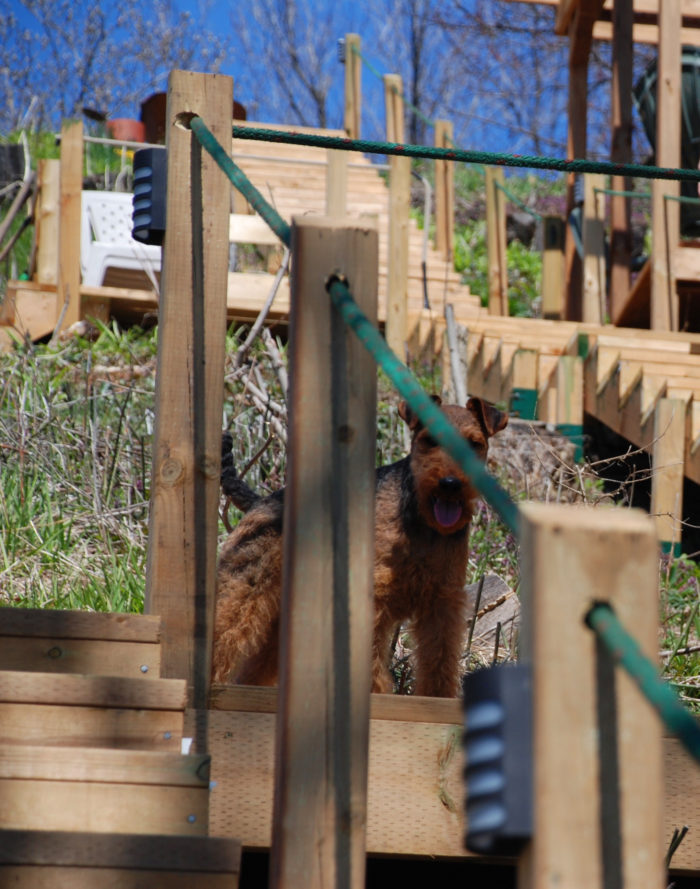 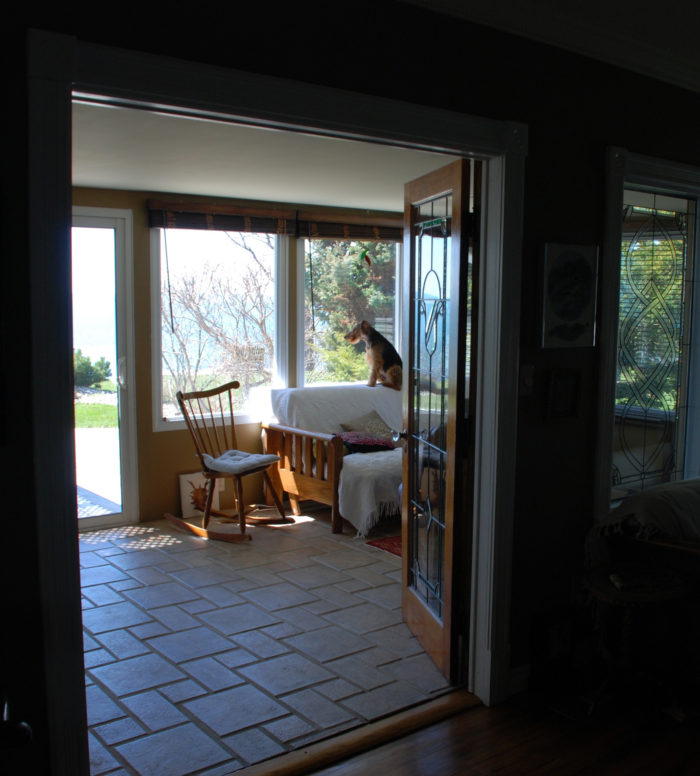 Miles’ favorite part of the lakeside retreat was the windows. 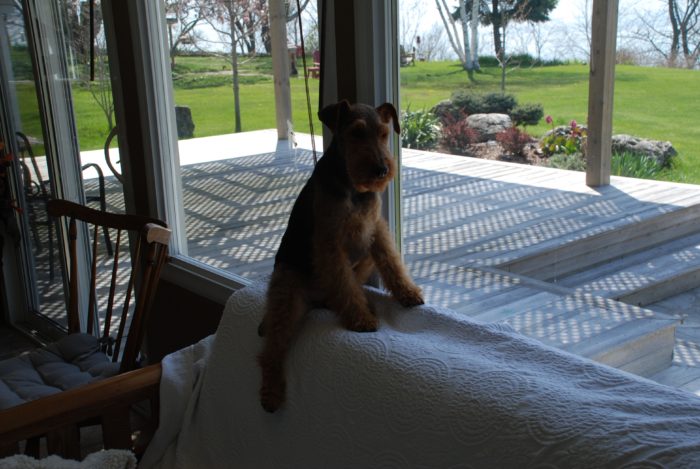 Miles’ preferred perch. He can leap to this spot on any couch, without ruffling pillows or blankets, and without disturbing someone lying down on it! Which can be quite disconcerting if you are in fact half-asleep on a couch… 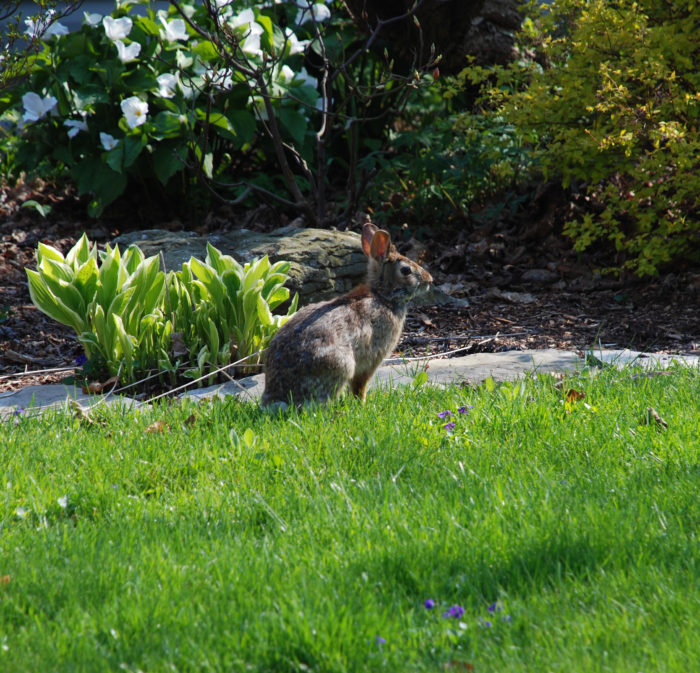 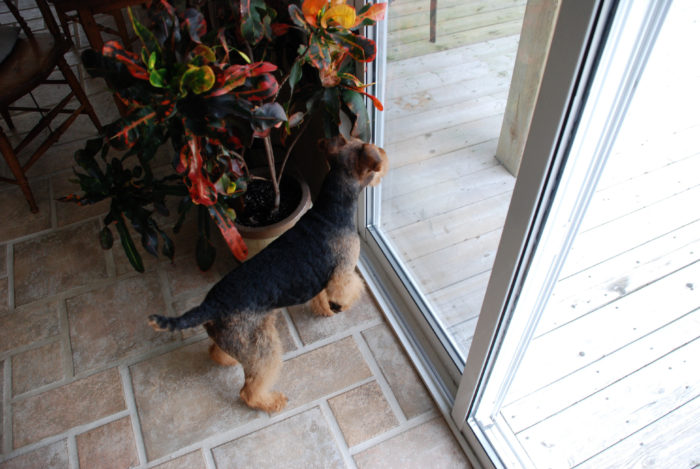 In the late afternoon, bunnies played outside, completely unconcerned with the terrier hysteria that would erupt inside. 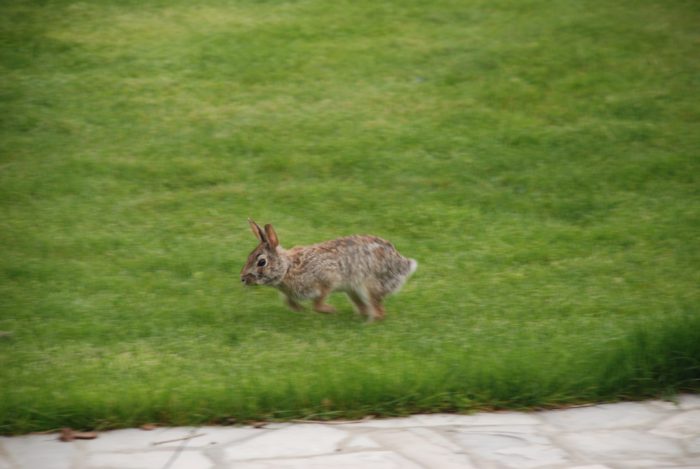 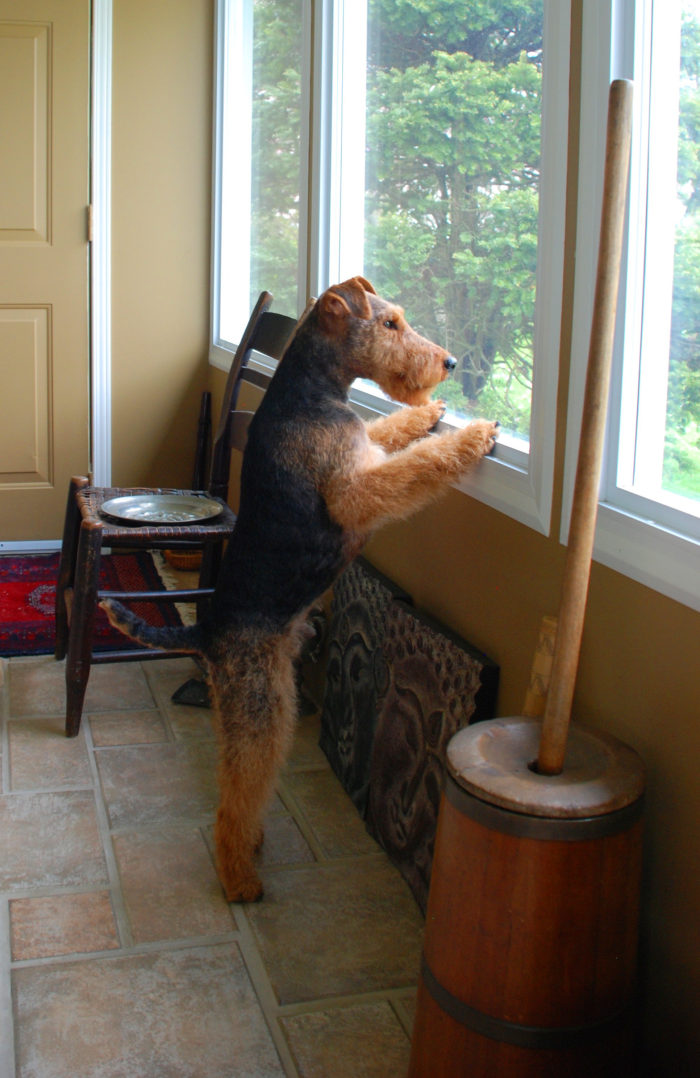 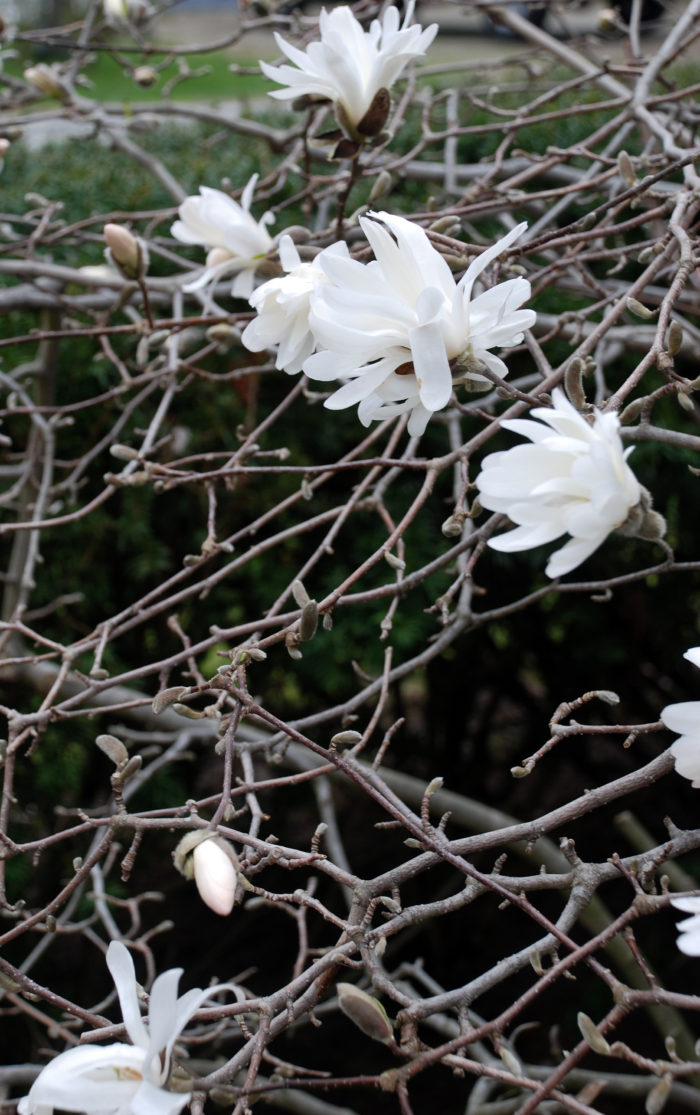 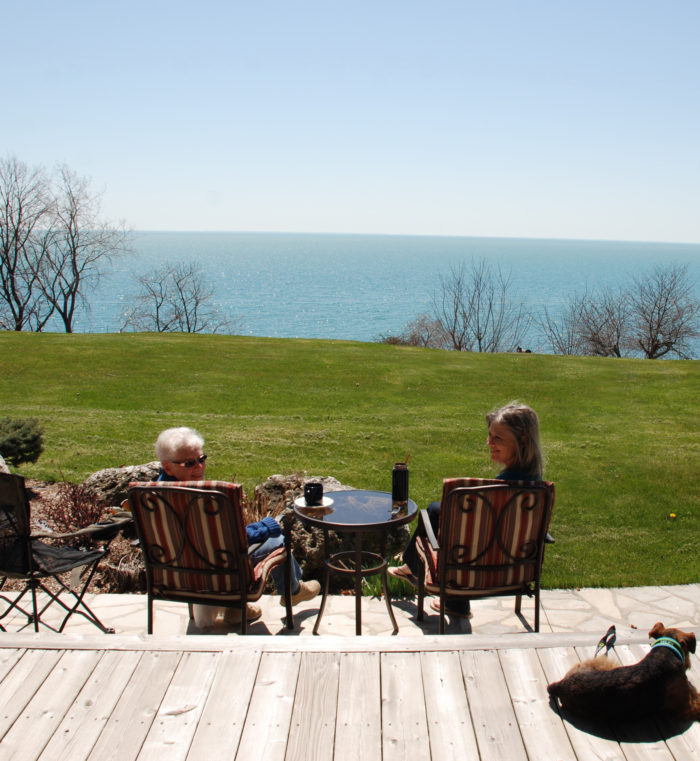 It was a good trip. I most mostly the all-purpose helper and chef, and Miles was seriously well-behaved, and there to lift everyone’s spirits. He was extremely popular at the retirement home! Nana had as good a surgery experience as one can have, and is turning 92 in a few days. 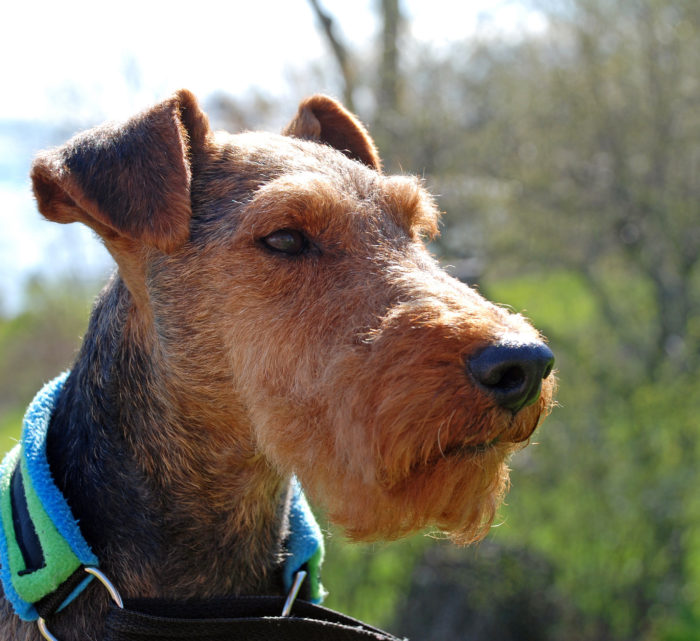 In the next few posts, I will share the hiking adventures we had at the Southern most point in Canada! We love to travel, and we fit in as much as we can. Despite and maybe even because of all of the hard work that needed to get done on this trip, hikes were a must.