Across Canada: The Prairies & Herbert, SK

In my experience of the southern stretch of Canada, there are three geographical sections — the Mountains (British Columbia), the Prairies (Alberta, Saskatewan, Manitoba), and the Lakes (Ontario, Quebec). Of course, this is being really general, and there are overlaps!

As an adult, I haven’t spent almost any time on the prairies of North America, even though the prairies of South Dakota are a big part of my heritage. Given my mother and I drove across most of Southern Canada in under a week, the Canadian prairies accounted for a significant portion of our trip! The first day of driving, we went through Alberta in the morning, and ended up in Saskatewan in the evening.

Each day of our road trip, we never knew how far we’d get, so my job was to book hotels on-the-go everyday. Amazingly, EVERY place we drove through was booked almost solidly! Who knew?

As the light began to wane that evening, day 2 of our cross-Canada adventure, my mother pulled off to get gas, while I called around, trying to find a decent place to stay. Finally, I found a place in Moose Jaw (yes there is a town called Moose Jaw!!!) that sounded good. Hotel booked, we realized we’d be on the road another hour, so we looked for a grocery store. By the time we found a grocery store, it was 7:55pm, and the store closed at 8pm. We pulled into the lot, rushed to get supplies, and returned to the car.

I immediately knew something wasn’t right. Miles was sitting in the front seat, staring down at an empty grocery bag.

“What is this? What was in this?” I asked my mother.

“Oh no! I forgot the snacks under my seat!” she said. (Backstory: my mother has always been very thin — and she has also, always, been an amazing eater. She never travels without tons of snacks). My mother and I have done road trips before with Miles, and we normally have a solid routine down upon leaving Miles, even for a second, in the car alone. Especially given the mass quantity of snacks my mother always has on hand! We always either take the food with us, or lock it in the trunk. Not that Miles is normally crazy to dig into packaged food, but rather, just as a precaution. That night, we were so tired, and rushing to get to the store, that my mother had forgotten to pack away her snacks — and I’d forgotten to ask her if she’d left any food in the car, as backup.

“My moon grapes! He ate all of my moon grapes!” my mother moaned. Turns out Miles had not only eaten two large bunches of moon grapes, he’d also eaten a baguette, and a bag of ginger snaps.

But back to the grapes.

Upon calling Miles’ regular veterinary clinic, I told the veterinarian that was working at the time about what had happened, and asked what I should do. She told me, without question, to get Miles to a veterinary clinic as soon as possible — and that this was very, very serious. If left alone, Miles would die. Even if not immediately, after digesting the grapes, he’d be dead of kidney/liver failure within 3 days.

I got off the phone with our usual vet clinic, and began furiously googling nearby veterinarians on my iPhone. I called every single number. Each one of them went to a answering service, where a person would take the message for the vet, and then send a message along to the emergency contact for each clinic. Not only were all of the towns in the area very small and rural — it was a Saturday night, after 8pm!

I contacted the last possible clinic, reaching yet another messaging service, and hung up the phone. Silence. Five minutes passed, which felt like an eternity. I had to go back and check the phone call record later to see the timing, and yes, it was only five minutes later that I received one call back. A veterinarian named Sarah called me back. I told Sarah about our situation, and she asked where we were. My mother was just pulling into the next nearest town. I couldn’t find a sign, so I checked my GPS for the name of the town. We were in Herbert, SK. Since Sarah was the only vet in the area that had called me back, she was my only hope.

Sarah and I discussed the situation and all relevant details, and she said, “I am an hour away from where you are. Normally I would recommend exactly what your own vet advised you to do — to get to a clinic as soon as possible. This is very serious. But you won’t be able to get to a clinic in time. That route isn’t an option, and I can’t meet you fast enough. You are going to have to induce vomiting yourself. Your next plan of action is to find hydrogen peroxide as fast as you can.”

Sarah was on the phone as we drove around what felt like a ghost town. Really, it was just a nice little small town. But in our time of need, I began to panic, as everything was quiet. My mother finally spotted some people eating dinner in the window of a building, and pulled over. She ran into what turned out to be a small restaurant, and ran back out. “I just asked two diners where I could find hydrogen peroxide, the restaurant didn’t have any, but, they all told me the local grocery store is open until 9pm, and it is right across the street!” My mom quickly drove across the street, parked, and ran into a small blue aluminum building. It looked like a tidy shed, or barn, from the outside (picture below).

I told Sarah I’d do what she’d instructed, that we’d found a place, and I got off the phone. I got out of the car, and ran into the store, where my mom was paying for the hydrogen peroxide. I grabbed the bottle off of the counter, and ran back outside. I then used as much calm and precision as I could, and I followed Sarah’s instructions.

I opened Miles’ mouth, tilted his head back, and gently poured two and a half tablespoons of the liquid directly down his throat. My calm demeanor worked, and Miles swallowed. I waited to make sure he’d swallowed, and then walked him around the block.

All of the grapes came up. Every last one of them. And because they were an exotic type of grape, that happens to be very firm, Miles had swallowed them all whole, and they had not leached their juices into his stomach yet. Had they been regular grapes, some would have most certainly burst, and been broken up into thin pieces of skin and liquid juices — which would have been digested much faster than whole, large units.

The grand finale of the ‘event’ was Miles giving me one last panicked look — and then pooping out everything that was in his later digestive tract. It was a real grand finale — instant, and projectile!

After he was empty, I picked him up, put him on my lap, and my mom set off for our last hour of driving to the hotel. I called Sarah back, and told her everything, and thanked her profusely. She told me all about symptoms to look for, just incase he had digested some grape. Thankfully, it became very clear that he hadn’t. But that didn’t stop my mother and I from worrying over the next 48 hours!

We got to the motel late, and Miles had chicken stock and water for dinner. He was alive. We couldn’t believe what had happened. (This will no doubt spark a road trip safety post!) 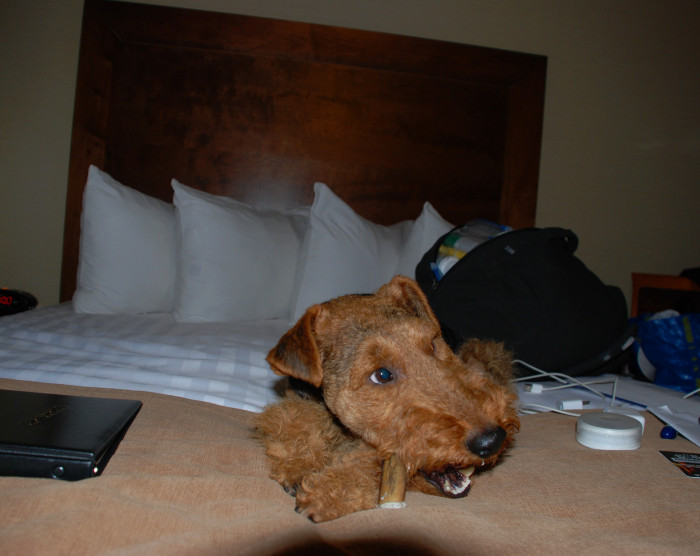 The next day, Miles was back to his normal self. A bit hungry, a bit tired, but happy, and healthy. Here he is (above) at the next night’s hotel enjoying a bullystick on my bed. It took a full week for my mother and I to really absorb what had happened.

I have since googled Sarah and found her clinic and bio here: South West Animal Health Centre. The internet is amazing, isn’t it? I have put a special ‘thank you’ in the mail for Sarah.

The two places I found along the way to stay in during our stint through the Southern Canadian prairies were both great road trip accommodations. Of course both accept pets, are clean, and pleasant — the main reasons why I liked them!

Across Canada: The Northern Rocky Mountains & Field, BC

Across Canada: The Great Lakes & Thunder Bay, ON