I decided to start agility classes with Miles the second he was old enough for beginner class. I grew up doing dog 4-H, and finally I had a clever little dog to try agility with as an adult. At first, class was lighthearted and fun. We were with kids, old dogs, tiny dogs. I was an absolute mess trying to learn to follow a course, and Miles was a wild, hyper, unfocused (but happy) puppy. As class progressed, and the less focused people and dogs trailed off, I soon realized what a challenge Miles and I had undertaken by sticking around.

Young male Welsh terriers aren’t exactly known for their focus or attention span. While certain breeds were bred to follow human leaders, I’ve come to realize that terriers were bred to be self-directed hunters. They are masters of focusing on peripheral movement and are drawn to action. They are alert and focused, but on many things at once, and by nature, on what should be most important to them, for their job. Miles didn’t seem like an agility dog, and it’s not like I am exactly a natural either. I am easily distracted, hyper, terrible at organized sports, and I like to “wing it.” (And people ask why I got a Welsh Terrier?)

In the first few months, Miles eared the titles of “the zoomie master” – since he spent most of our allotted practice time running around wildly, and “Miles has a death-wish” since he was constantly diving into the faces of his unsuspecting canine classmates. Class usually went like this: Miles was squirming to chase the other dogs as they did their turns on the course, and when it was our turn, our time was spent with him tearing around at lighting speed — mostly away from me. Occasionally he would add to the mix a nice touch like marking something, or escaping into the waiting area where all of the unamused older dogs were patiently sitting. “At least he is having fun,” our instructor would say. She has the right attitude. It is that kind of thinking that keeps you going, and keeps your focus on what is really important. 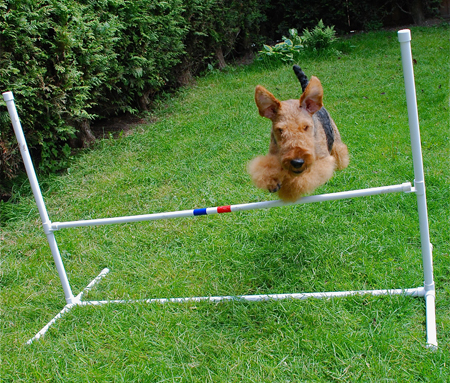 Even after he peed in the tunnel, leg held triumphantly high, flashing my class a proud grin from the opening, I continued coming to class. Even after I, week after week, could not remember the simplest courses, I continued to show my face at class. I resisted the urge to sink into my chair when classmates mocked my inability to follow the short practice courses, I cleaned up Miles’ messes, we took extra training classes at night, and I got some collapsable practice gear. Every class I brought a different assortment of the best treats I could find. Things seemed to go on as usual for a while, so instead of bemoaning Miles’s endless zoomies, or focusing on the embarrassment of yet again forgetting where I was on the course, I kept going. It really wasn’t easy.

One day, something incredible happened. My instructor set up a course filled with long weaves. She said “today will either make or break Miles.” She was right. She set up that sort of course at the perfect moment for Miles and I. I directed Miles the right way (for once!) through the weave poles, and he wove through every one of them. Over the next month, Miles’s zoomies lessened to the point where they ceased to erupt out of him. He still would get them, but nothing like before. At first I thought the volcano was just dormant, but I realized he had learned to redirect his energy. After months of dealing with our learning curves in different ways, Miles and I started to actually enjoy agility.