This June, Miles and I competed at the Regional Agility Championships. It was the start to a very busy and crazy summer! My car broke down right before the event, and thankfully, I was able to hitch a ride with a fellow competitor from my area. Regionals here are an hour from my home, and the competition days begin at 6:30 am. Attending Regionals takes so much planning and organization. The venue where Regionals is held here is a world class equestrian center, which boasts high-end white sand-like footing. As far as I am concerned, this special footing is evil! It is very hot, bright, and highly reflective. Regionals ended up being on the weekend of a massive heat wave. 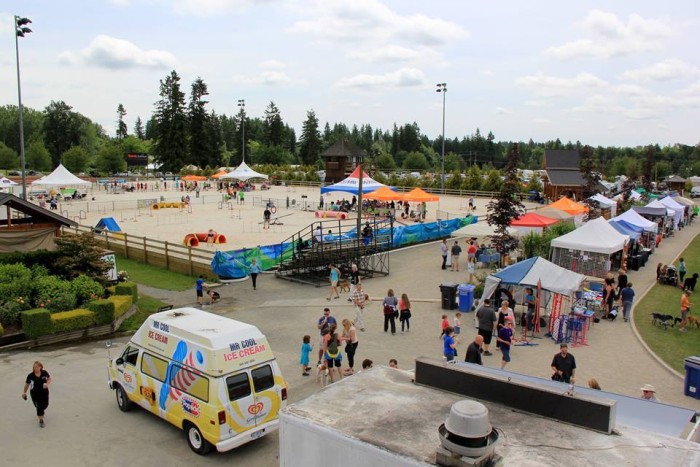 At Agility Regionals, the rules of the game are a bit different than normal competitions. At regular trials, the goal for each run is to get a Q (aka a “qualifying” fault-free clean run). Qualifying runs add up into titles. The runs at Regionals aren’t worth Q’s, but rather, points. At Regionals, if you earn enough overall points, you can qualify for Nationals. If you qualify for Nationals, you then can compete against the best dogs in the country. Additionally, if your points are very high, you can win ribbons and trophies for placing high in your class at Regionals and Nationals. AAC Regionals are done over two days. Each day, there are three runs: one Standard, one Jumpers, and one Gamblers.

Our first event at Regionals was a Standard course. This first event also marked the biggest strategical mistake I made all weekend! At Regionals and Nationals, you are given the opportunity to pay to have a short period of time (around a minute), to familiarize your dog with the competition arena and some of the equipment. Usually this is a day before the real competition begins. Because it was very hot that weekend, I decided to pass up the opportunity, because I wanted to conserve Miles’ energy for running around in the heat. Miles really hates hot weather. I figured we’d have a better chance if we “hit the ground running” on Saturday. Well, we did! I got Miles onto the first course, released him, and off he went! Just not exactly how I’d hoped. If running a course under time with extra obstacles could earn bonus points, dang, we would have been on fire.

The second event on Saturday was our Jumpers course. I was a bit worried after that first crazy run. But we ran it clean, no faults! And under time, no less, earning us bonus points! I was so proud of my little guy! It was an exhilarating run, and one of the first times I had felt like I was solid in remembering such a winding fast course.

The final event was Gamblers. It was scorching hot by then, so I wasn’t feeling too optimistic about getting Miles to zip around for mega points. Well, we got out there, and Miles was a bit erratic, but we rocked it. Miles did a mini-gamble twice for bonus points, and completed the final gamble (which included 12 weave poles) under time! We got 3rd place in that run. Our first Regionals placement!

Our first run Sunday was Jumpers. I was really worried about Jumpers, because it can be so hard to remember! The course was just as winding as the day before, so I was concerned about a repeat performance of our first run on Saturday, where Miles was crazy. We got out there, and had one problem — Miles bolted off in the middle of the run to take an extra tunnel. Boom, -20 points! But otherwise, it was a great run.

Our second run on Sunday was Gamblers. The final gamble was something we haven’t done before, so I didn’t count on getting the bonus points. Instead, I looked at what sort of opening points we could rack up. Unfortunately, the opening point opportunities were not great. The high point obstacles were far apart! We did our best, but Miles fumbled in the weaves, and I wasted time trying to fix it. We didn’t get a ton of points, and we didn’t get the final Gamble.

Our last run was Standard. Miles and I were so tired by then, and it was scorching hot out! The run had some really great moments, and some frustrating moments. Miles fumbled through the weaves again, but I couldn’t blame him. Miles trying to do weaves in that kind of heat and under that kind of pressure is like me trying to do math after no sleep in front of an audience! He isn’t used to the crowds or the strain, so I tried to be as encouraging as possible. When the run was over, I wasn’t sure where we stood, point-wise. We gave it our all, but we are newbies at this caliber of competition. I held my breath, and waited for the awards ceremony. My tent-mate friend and I were delirious by then — and very sunburnt. Neither of us burn easily, and despite constant applications of sunscreen, we were nicely crispy.

Hours later, Miles and I sat with our friends to hear the awards. It took a while to get to our class, so by then, the suspense was killing me. Would our names would be called? Only teams that qualify for Nationals are called.

When it came time for our group, the announcer listed off one dog. And than another. I let my breath out at that point. We hadn’t qualified. The dogs being called out where experienced, and there was no way we’d placed higher than them. Then I heard “Miles” — I could not believe it. I nearly passed out! I went to receive our ribbon, and heard our friends and our teacher cheering for us. I took the huge ribbon, and felt tears welling up under my sunglasses. I went back to my seat, in a complete daze.

It was one scorching weekend, and we tried our best. Half the time we didn’t exactly know what we were doing. I took some chances, trying out the new moves I’d been learning with my new instructor.

All that hard work paid off. We qualified for Nationals!

Miles’ ribbon picture is hilarious. He looks like he is going to fall over from heat exhaustion. Pretty spot-on!