I have known Emi and Racer about four years now, but in the past, our paths haven’t crossed too often. When we first met Emi and I became fast friends, as she is sarcastic and enjoys good snacks — and I had a soft spot for Racer right away, because he is a hilarious character, like Miles. Emi and I now live closer together than we used to, we both compete at the Master’s level of agility, and although we train on different days of the week, we both train with the same instructor.

Miles and Racer are novelty wild men of AAC agility. They both are the only ones of their kind to currently compete at the Masters level. At this trial, the Team event was offered (see bottom for description of AAC Team Relay class). I asked Emi if she and Racer would like to try it with me and Miles. Emi hadn’t tried it before, and so she was a bit nervous. 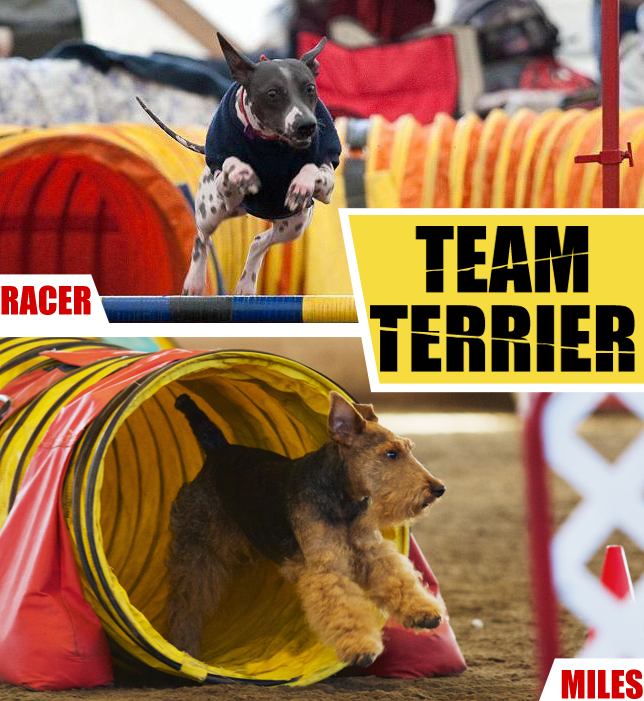 Agility is a team sport — to excel, you and your dog have to work together at a high level. Now, add the team event on top of that– that is four parts that need to work together to succeed!

I assured Emi that our run would be for fun first and foremost. Well, Racer and Miles really pulled out all of the stops! Miles and Racer busted out a completely amazing Team run, totally clean, no faults, and in way under the allotted time! They not only Q’ed it, they also won first in their class! Miles ran section B — and even found time in his run to quickly take off and say “hi” to Emi & Racer before beginning his run. It wouldn’t be a novelty success story without a bit of character, right? 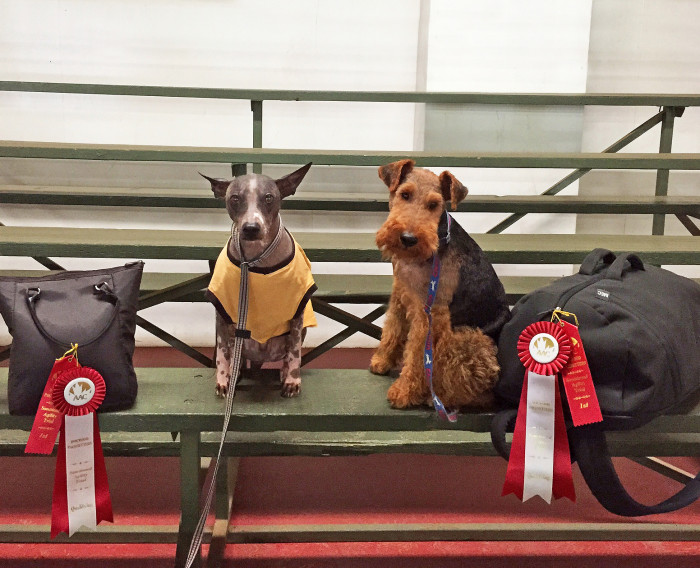 { It was a wild victory for team wild terrier! Both hairless, and wiry, alike }

The object of this game is to demonstrate team spirit, strategy and sportsmanship, as well as a dog’s acceptance of another dog performing in the ring. (AAC Rules, v.5)

AAC Team Relay Class: All teammates (two dog/people teams) enter the ring at the same time, without treats or toys. Team A runs their course of 10-13 obstacles, while Team B waits inside their marked box within the competition ring. Team B can have the dog leashed while waiting for Team A, but cannot use toys or treats. Once team A completes their course, they go to their box within the ring. Team A must be inside their box before Team B can leave theirs. Team B then completes their 10-13 obstacle course. Once Team B has cleared the last obstacle, the time stops. The Team event is judged on accuracy and time. One minor “course fault” is allowed per team, which subtracts -5 seconds off of cumulative time. If the 2-dog 2-human team complete the course in under the allotted time together, then all Q the run.