Anyone who loves dogs knows that types of dogs have passionately dedicated fans. We are so fanatical that we have our own terms and we have had “memes” long before memes were popular! For terrier people, the perceived intrinsic “naughtiness” of these dogs has always been what people have bonded over and it has been the affectionate focus of sayings, jokes, and anecdotes about our beloved terriers. I think it is time to change that and find new ways to relate to our dogs. 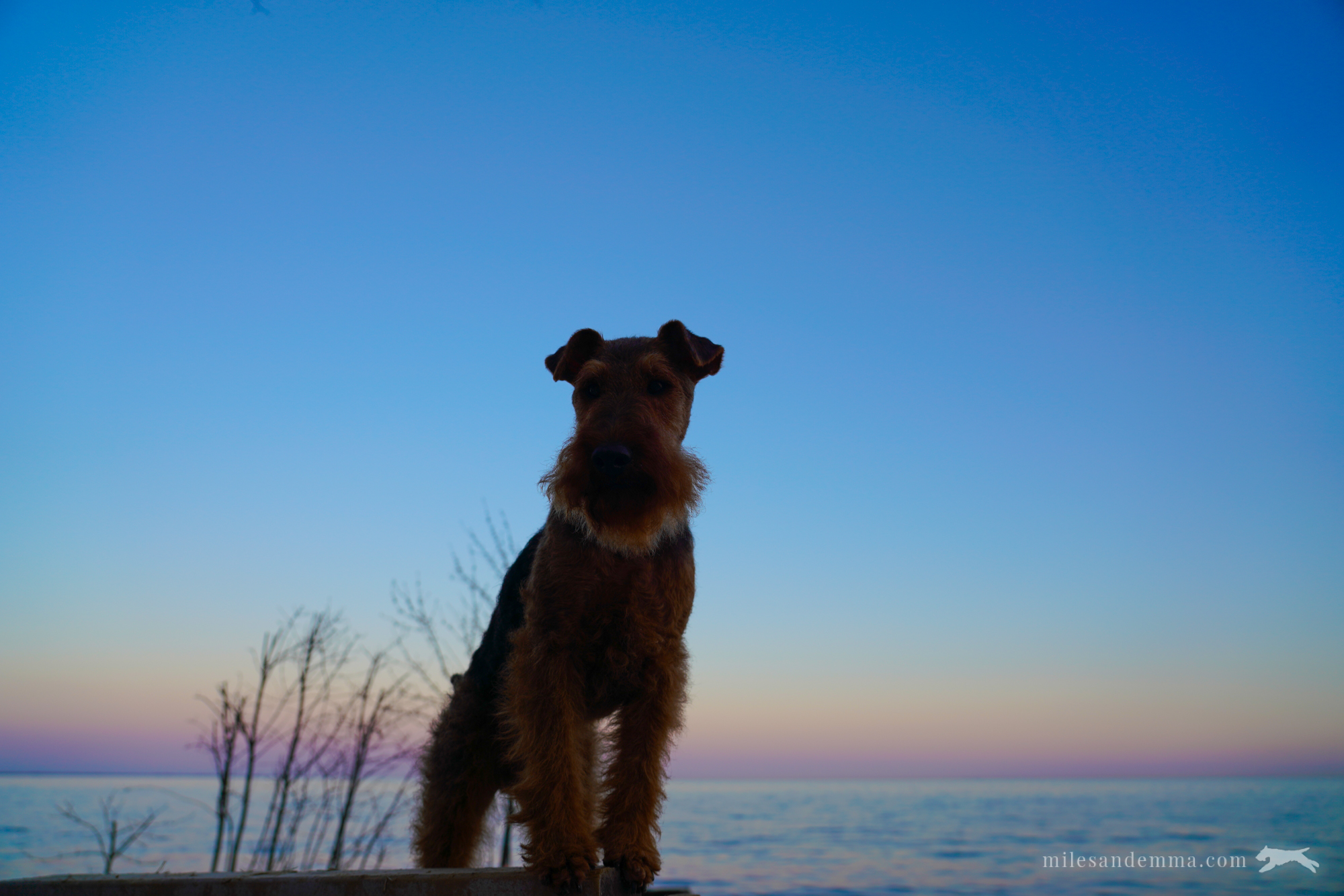 The noble terrier. Who is he? Is he stubborn? Is he naughty?

Terriers were bred to protect our food sources and storage areas from pests and predators. We bred them to be tireless and scrappy, and to fearlessly put their lives at risk when working. We bred them to work independently day and night, and to be attentive to primal cues such as smells, noises, and movements of predators and prey. Terriers were bred to notice these cues instantly, and immediately chase predators/prey, often hunting them to the death. They were not bred for a propensity towards working collaboratively with humans. They were bred to work tirelessly and get the job done on their own.

We have bred terriers to possess:

Terriers didn’t just protect our agricultural pursuits, they were also set loose in the trenches of war to protect soldiers from life-threatening vermin. Terriers have long done our dirty work, tasks that aren’t for the faint of heart. We owe terriers a lot for their service, yet somehow they are some of the most misunderstood dogs today. 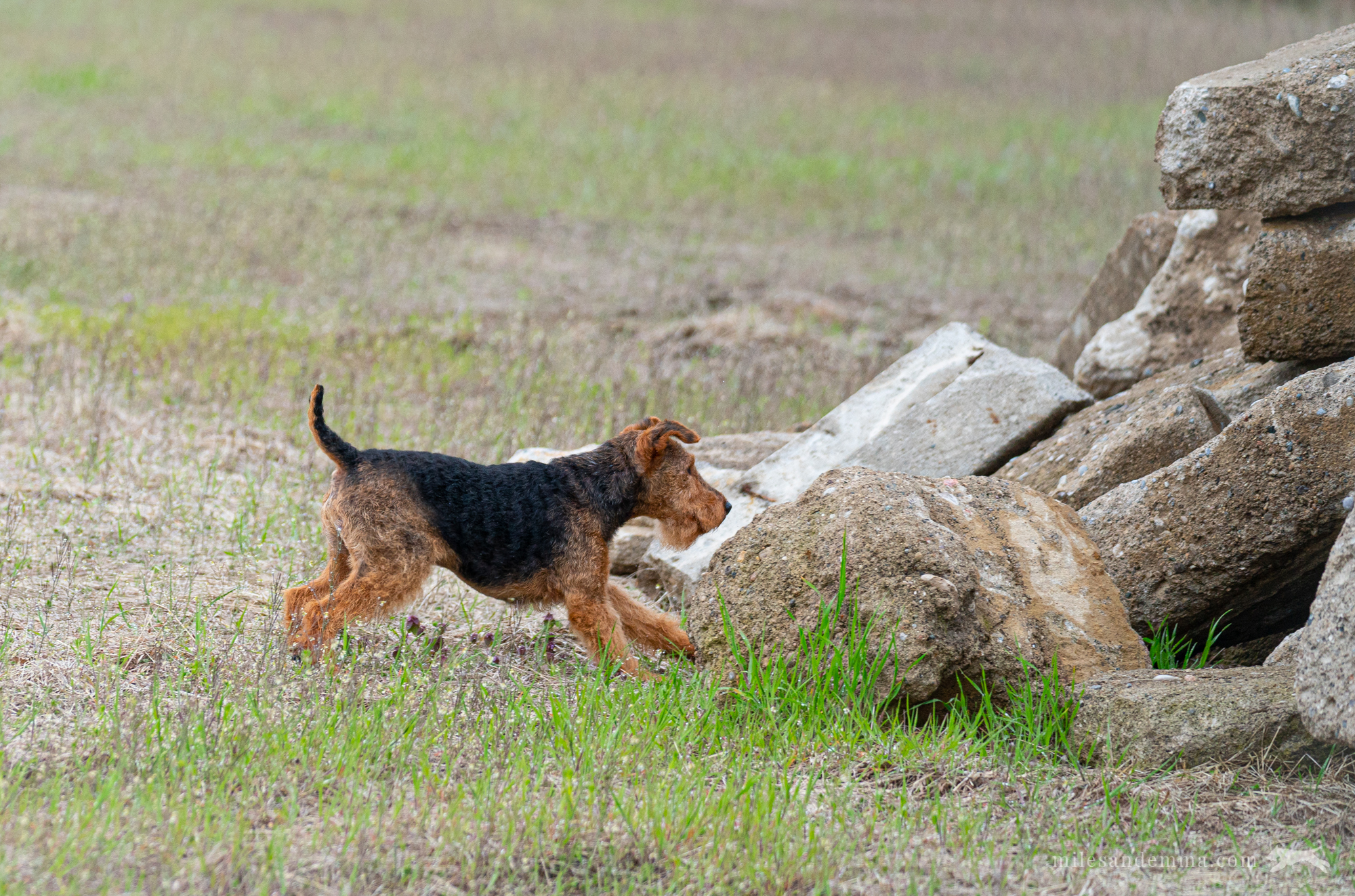 Terriers weren’t bred to be “pets.” They were bred to hunt.

Unlike with many purebred dogs, there is often little to no distinction between working and companion/show lines in terriers. In the show ring, terriers must demonstrate the boldness and fire of their working origins to win and carry on their line. Is carrying on working nature a bad thing? I don’t think so, if we know how to recognize and appreciate differences. I love living with a full-strength terrier. I enjoy working with my dog often. I am patient, I am hardworking, and I am very active.

When you think about what terriers were bred to do and what we expect of most companion dogs, there is a stark contrast between who terriers are and who we often hope they will automatically be as pets. Usually we get canine companions to provide us with relief from work, not to create more work for ourselves, and recognizing difference and accommodating it can take just that: work. It is up to us to provide our dogs with the type of care and training that they need. 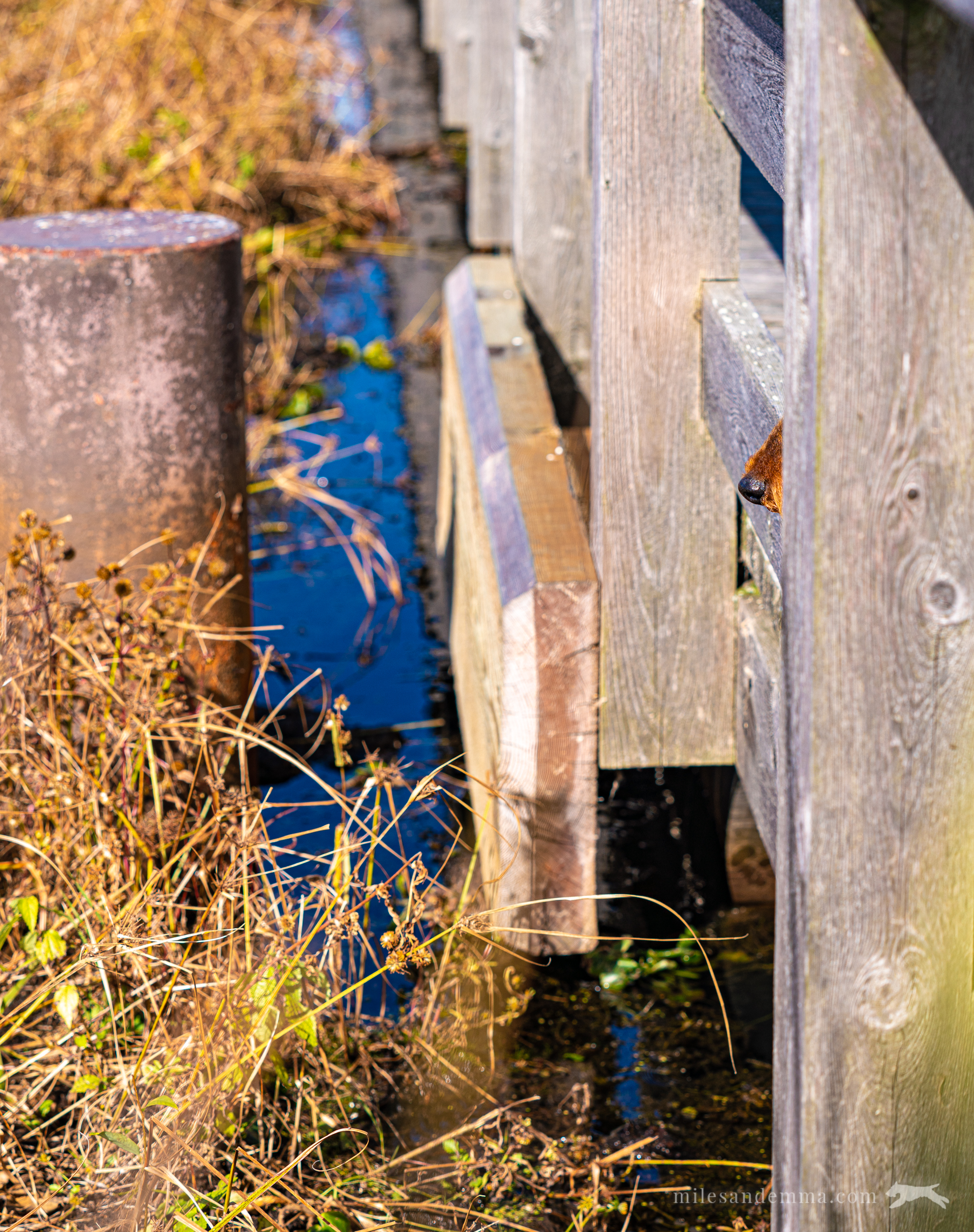 Terriers are probably the most common dogs to be called “naughty” and “stubborn.” Because terriers are some of the most instinctual, hard-wired, and independent working dogs, they have some of the poorest reactions to ill-suited methods. Many other intense working dog types also commonly experience fallout—for example, dogs bred for herding and for protection.

Dogs who are trained and cared for with methods that do not suit them become misunderstood. Dogs who are misunderstood have two basic choices when they aren’t sure what to do: they can choose fight or flight. Things do not usually go well for dogs who attempt to defend themselves. Terriers who choose flight usually can’t run away; they are confined by leashes, doors, fences, and gates. Sometimes they are even stopped by electric shocks. They will often begin to exhibit a modified version of flight. Since they can’t run away, they will retreat inwardly. In the world of psychology, this is a state that is referred to as “learned helplessness.” The Oxford Languages dictionary defines “learned helplessness” as “a condition in which a person suffers from a sense of powerlessness, arising from a traumatic event or persistent failure to succeed. It is thought to be one of the underlying causes of depression.”

In response to ill-suited methods, terriers can become aloof. They respond with less gusto to our requests and sometimes they don’t respond to our requests at all. They may sleep more but are always scanning the environment for freedom and opportunity. They become opportunistic when we aren’t looking, and they crave the times that they can steal any kind of freedom. 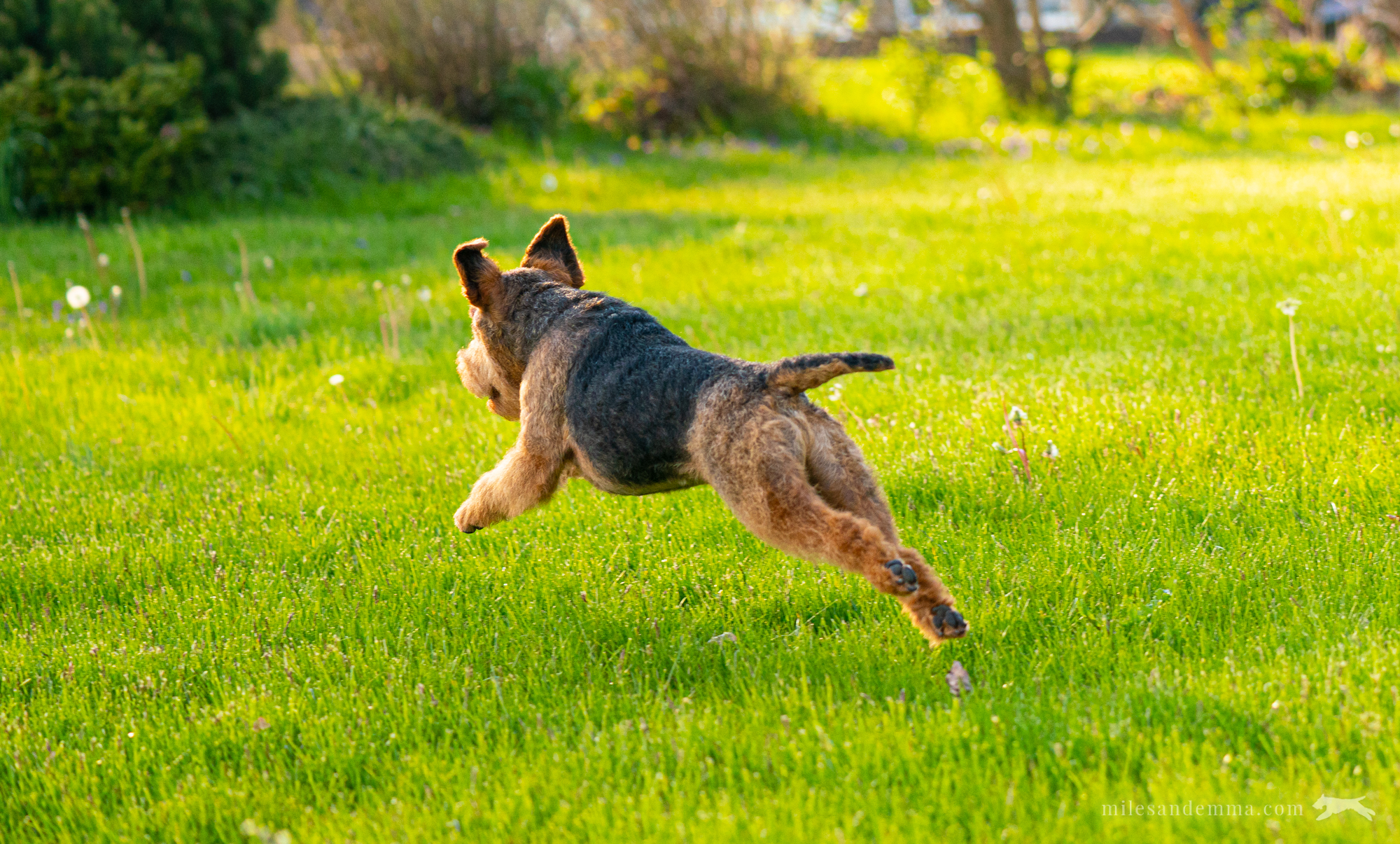 In the Welsh Terrier world, the term “stink eye” has become extremely popular. “Stink eye” refers to when a dog stiffens their glance slightly. Their head might tilt a little to the side, and you can see the sides of the whites of their eyes. Affectionately, people have thought of this expression in terriers as a sign of prideful naughtiness, sassy self-expression, or willful skepticism (perhaps that aloof, opportunistic persona I talked about earlier). In the dog behavior world, this presentation is called “whale eye.” Sometimes it is paired with exuberant play, but the times when the dog is relatively still, tilts their head a little, and stares, it is considered to be a sign of stress and a warning signal. The last time Miles demonstrated “whale eye” to me, I did a physical examination and found that he had freshly broken a tooth right down to the raw red root and was in pain.

Calling a dog “naughty” sets us up to see a constant low to medium grade state of discomfort, depression, and/or maladaptation as normalized and acceptable. It takes the responsibility off of us. We select our dogs and control every aspect of their lives, so it is time for this to change. Terriers are constantly put in situations where they are not set up for success or safety. Think of any video you see on social media where a terrier is straining their neck on-leash to get to a cat and the handler is filming and getting closer to the cat. The comments are often centered around gleeful attributions of “naughtiness.” We live with dogs who are highly instinctual and many of their instinctual needs are not met and/or aren’t safe to rehearse without care and planning. Even when we love them and mean well, we don’t always realize the responsibility we have towards their instincts. 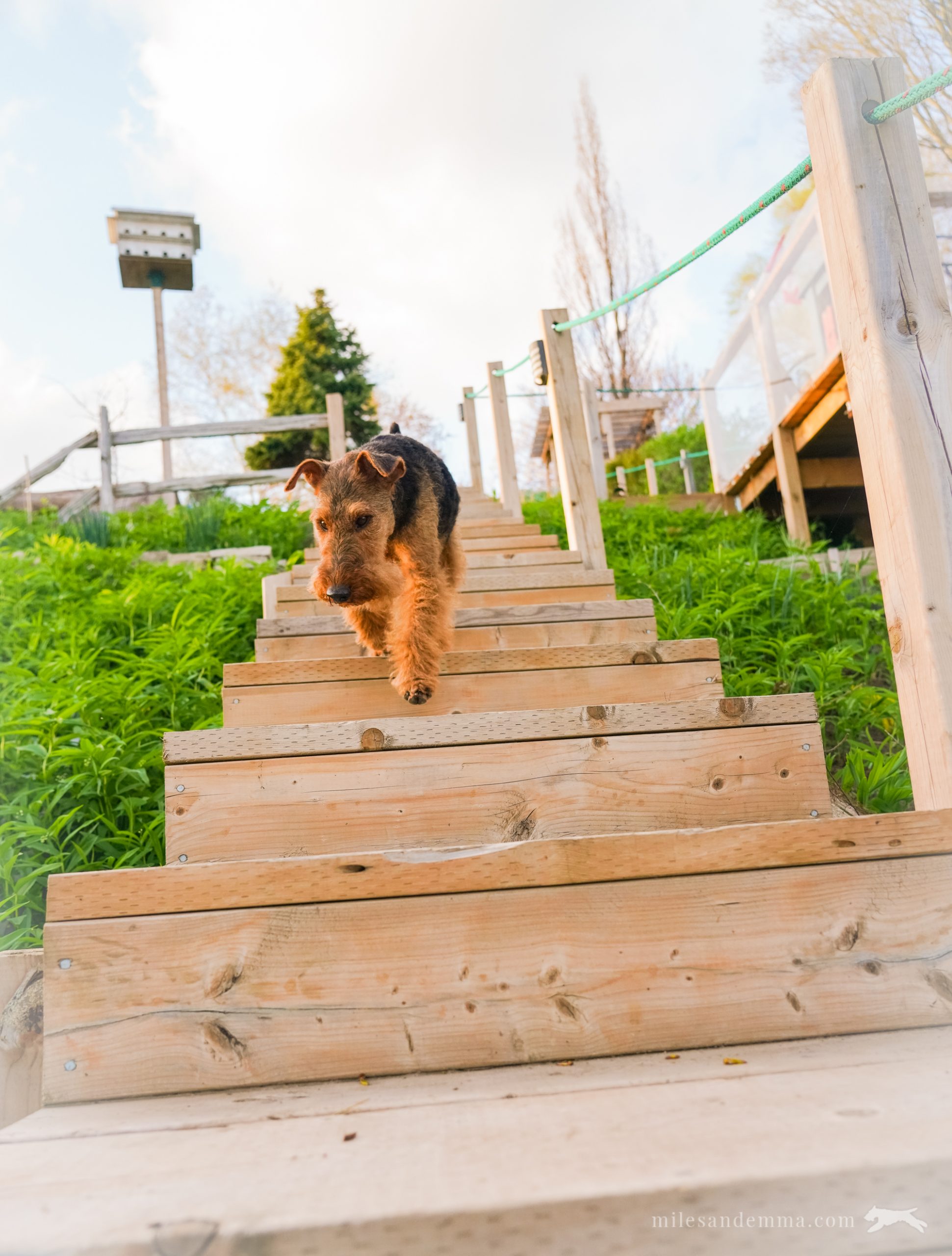 Misconceptions don’t just hurt dogs, they hurt us too. Unpacking how we culturally think about types of dogs isn’t easy, but the benefits are immense.

No More Missing Out

Growing up as a child who was obsessed with dog training, I followed the conventional wisdom of the time, even when it didn’t feel right. The old methods worked to stop behavior. I often hope that these ways have faded out of our consciousness as great strides are made in behavior and learning sciences, but sadly, aversive and coercive methods ranging from the classic to the extreme are still often the go-to for dealing with terrier behaviors. I see posts about puppies who are already showing signs of maladaptation and the suggested response is to hold the puppy in a firm body/headlock until long after they have stopped trying to escape. What a fast-track way to condition a dog to opt towards learned helplessness. What a terrible thing for a young dog to learn. We bring terriers into our lives specifically to enjoy and celebrate their vibrant, intelligent personalities. We can no longer be helpless in the methods we chose.

My childhood puppy Cinnamon and I were inseparable. I have so many good memories. But there were also disconnects. He would run away in the evening and tear through the woods, and his recall fell under the category of “if he felt like it.” Looking back, it saddens me to think that many of Cinnamon’s happiest moments weren’t with me.

There are many movements to recognize dogs for who they are, with less misunderstanding. Many types of terriers aren’t yet a part of this trend. I want to change that. I don’t wish the feelings I have about missing out on who Cinnamon really was on anyone. Don’t be afraid of change, don’t miss out. In the life I lead with Miles, we communicate with understanding and respect. Miles doesn’t have to run away to tear around the woods in the middle of the night in a dance of repressed emotions. Miles doesn’t check out on me. Miles and I get to be together for our most joyful moments. 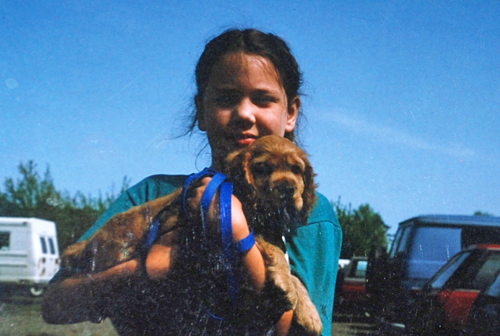 I look back and passionately remember so many good times with Cinnamon, but I also missed out on a lot with my best friend. I don’t wish that feeling on anyone.

Recognizing When Something is Amiss

Naughtiness and stubbornness are not terrier attributes. These are the labels we use to describe both the naturally occurring behaviors that we might not understand how to work with, and the visible fallout of ill-suited care and training methods.

“Naughtiness” and “stubbornness” are just labels, and these labels are signs that there are disconnects in the care/training puzzle. Understanding and working with any dog is a lifelong process, and things come up over time. When I witness Miles behaving in ways that are worrisome to me, it isn’t him being “naughty.” It is a clear indicator for me that something is amiss. And with a little regrouping and thought, I can do something to help. I am empowered. Miles is empowered. 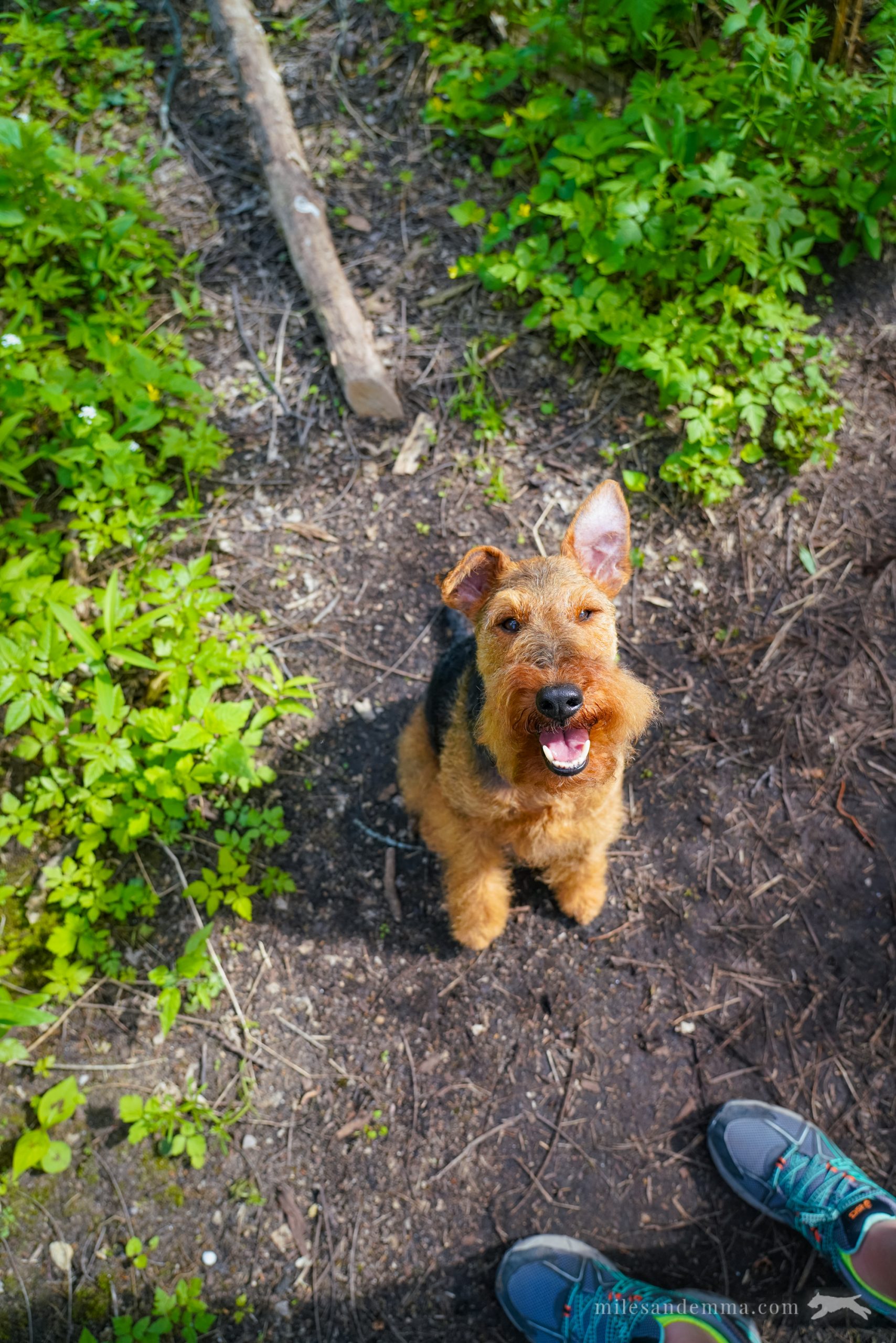 Miles wants to work with me, he is attentive and eagerly listening!

Terriers Don’t Bother With the Norm, and We Shouldn’t Either

We’ve accepted maladaptation to care and training methods as the norm for terriers, and culturally we’ve been taught to ignore warning signs of stress and to instead turn them into real-life, real-time anthropomorphized memes. Our dogs end up coping on their own a great deal of the time as a result. A common argument against questioning concepts such as “stubbornness” and “naughtiness” is often that to do so is “touchy feely.” I believe it is logic-based to identify the roots of behaviors and to address the causes. It isn’t always the easier option, but it is a deeply worthwhile way to go. Change isn’t always easy or comfortable. Working with a terrier takes more effort than most of us realize, and recognizing the work involved is a big shift.

It is high time we take note of our terrier’s playbook and begin questioning the norm. It is in that initially uncomfortable place where we are released from the darkness where Cinnamon tore around by himself. We can work together and be free together. Dreams really can become reality. 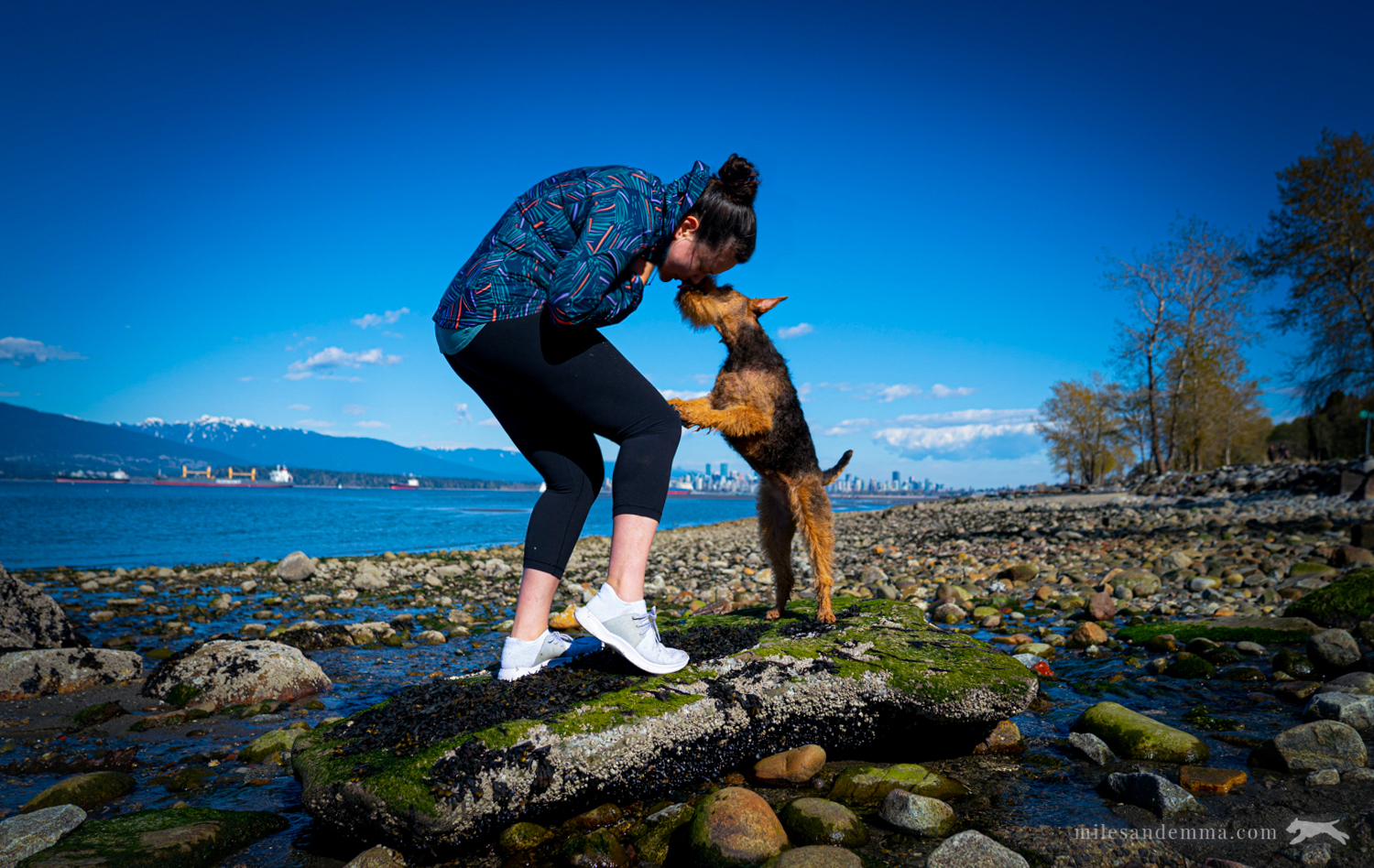 Command vs. Cue: A Profound Way to Change the Way We Relate to Our Dogs