Back in the Groove! (but not without a splash of bad luck) 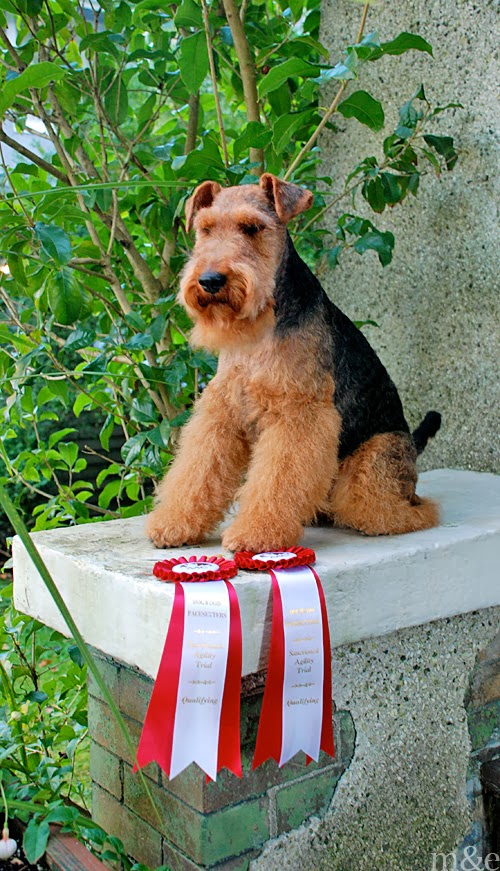 The few agility trials after “you know what,” Miles was too nervous to do much at all. I was starting to really worry about how we’d get back into the groove, and even, if we’d get there at all. I’ve heard so many stories about dogs never being the same. After having to pull Miles from a trial because he was so nervous he got sick, I decided we should take some time off to seriously slow down and regroup.

Two weeks ago, we attended an agility funmatch, and I used the opportunity to really have a rip-roaring fun time with Miles. It was a huge success, making me realize I should have just waited a few months and then done this funmatch. Poor Miles.

Last weekend, I was recovering from a really nasty virus (hence the lack of blogging). I had been in bed all week, and we hadn’t done any practice at all. Somehow I got myself out of bed, and got us to the first trial I’d signed us up for since “regrouping.” And man oh man, was it worth getting out of bed for! It took us a while to warm up… But after lunch, it all clicked… And we were on fire! Miles was BACK!!! Two Qs back-to-back! He busted out all of the right moves (and when he didn’t, my abnormally good improvisational skills saved our bums). Driving home tired and sick has never felt so exhilarating.

Plus, a most unfortunate event…

The next day, we were walking on clouds. Miles had a skip in his step, and I slept in my sick bed without a complaint in the world. It was evening by the time I dragged myself out of bed, and I decided to take Miles out into our backyard for a little fun. Now, I have not updated ya’ll on the backyard situation here. We rented this place half for the huge backyard, which we were supposedly going to share with the downstairs tenant’s “friendly” greyhounds. We didn’t meet the female greyhound until we’d already been living here a month, and she is not a nice dog. She is extremely territorial with all dogs, and Miles is no exception. I told my neighbor this clearly, and also asked that he not ever let her out if we are outside. This was an easy request, because his entire home looks out on the backyard. All he has to do is look out the window before letting her out. Well, despite this, he let her out that night, and she came barreling at Miles, growling and nipping at him. I did not stop in shock, I threw my body towards Miles, and screamed louder than I ever have in my life. It was beyond horrifying to see something of this effect after what happened before. The massive dog had Miles and I cornered in a planted area next to one of my neighbor’s windows, teeth showing, and my neighbor ran to the window when he heard my screaming, so he got to see his dog trying to bite at Miles, and me saving Miles from her, and he yelled at her to go away. She did not have the intent to kill (I can tell the difference now!), but she was looking to rough him up and to scare the shit out of him. And despite my intervention, she succeeded in doing that to both of us. Okay I will admit it – I began sobbing hysterically. Miles was convulsing with fear. I took him up to our place, and he ran under the bed, and growled with terror. I pulled him out and held him for 20 minutes until he stopped shaking – at which point he let out a sigh, released his clenched muscles, looked me in the eye, and licked my chin. We both stood up, still in shock. It took a few days to get over. I am not taking any chances — no more backyard.