We Did a Horse & Dog Relay Show

In July, two of my agility wishes came true. First and foremost, Miles achieved his Agility Champion Title! Secondly, I was invited to join the agility club that since I started doing agility, I have always wanted to be a part of! The club is small, non-for-profit, and comprised of serious agility people. My first club event was the chance to participate in an annual dog and horse show, and of course, I said “count us in!”

I was told by club members that dogs who are new to this event always get wildly distracted by the smells, sounds, and the poop. Horse poop all over the ring. And then, of course, there are the horses themselves. Let’s just say, when Game of Thrones is on, I set Miles up a safe distance away, with something to chew on. The sight of running horses whips him into a frenzy.

While we weren’t going to be in the ring at the time as the horse and rider, I knew we’d be in an arena filled with horses, and with the sounds of horses running, jumping, and snorting reverberating inside. I wondered if crowds would be there, but, clearly not — amazing, considering the event is part of a massive 17-day fair that drew over 700,000 people this year.

What Goes into a Dog and Horse Relay Show?

Horses and riders are paired with dogs and handers, who compete for the fastest combined team time. Faults are subtracted from time, such as a horse knocking/refusing a bar, or a dog missing obstacles or taking extra ones, missing the A-Frame contact, knocking bars, or failed tries at the weaves. Riders pay to enter, and risk losing or winning money based on the outcome. Therefore, there ends up being pressure behind the scenes that you might not expect, which I was warned about.

The scene was frenetic when we arrived, as both sides were rushing to quickly set up the course. I helped set up, and then saw that members were squeezing in quick warm-ups with their dogs. I waited our turn, and then practiced a few obstacles with Miles. To finish I sent him into the yellow tunnel, and as he went in, from the corner of my eye, I saw another member’s dog running uncontrolled and far from her towards Miles.

The bigger dog went after Miles into the tunnel, and I heard him yelping in the middle of the tunnel. He burst out the other end, with the dog charging full-steam after him. The owner was still far away, and I leapt to grab Miles. I pushed the dog away as I scooped Miles up, and felt his little body shaking against mine. As many of you know, Miles was almost killed in an unprovoked attack a few years ago. I was definitely unsettled by this moment, but, you know, things happen… I am grateful this one ending up not being a bit deal.

As we waited in the stands, I pushed the crummy warm-up moment from my mind, and kept Miles where he couldn’t see the horses. We practiced my focus exercises as we waited — aka what I call ‘Warm Up #2!’ I strongly believe Warm Up #2 is even more important for high-drive terriers.

The event began quickly. We were the second team up. Our horse went first, and was slow, and knocked a bar. We went out into the ring the second our horse and rider left. I set Miles up at the start area, and practiced a focus exercise as I removed his leash. What excellent practice in proofing, in such a extremely uniquely distracting environment! Miles was afraid of the tunnel where the other dog had charged him, and hesitated before going in both times, but other than that, he BUSTED out the course awesomely, nailing the 12 weaves, and the two A-frame contacts. He didn’t stop to sniff, or to check out horse poop. He was 100% focused on the task at hand. The second he finished the last obstacle, a handful of roasted chicken from my pocket was launched into his mouth! 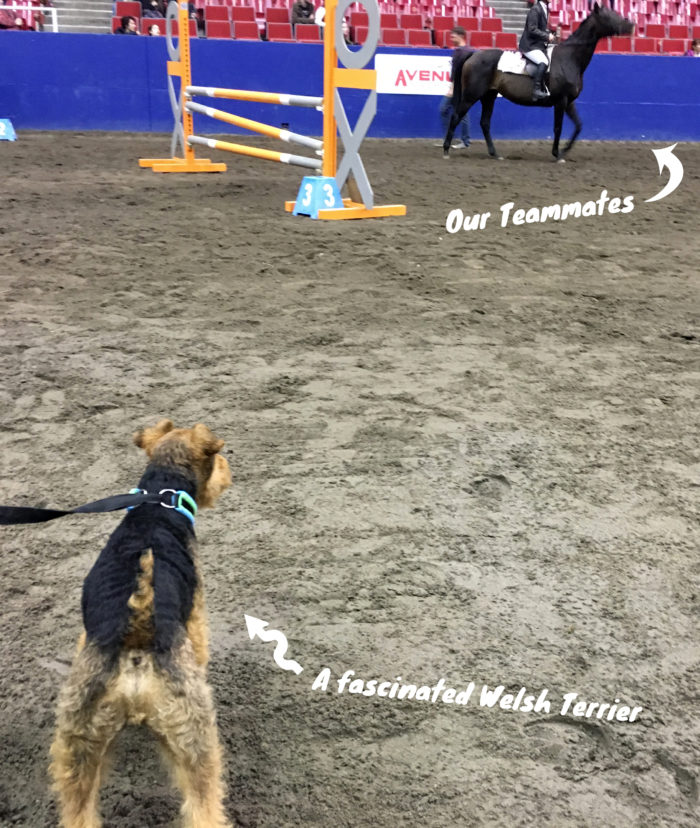 When all of the teams were done competing, the announcer had us all gather in the ring. I hadn’t realized there was an awards ceremony to the show — how funny right?! This was where Miles finally got to see the horses. He was wimpier than he is when they are on TV (big surprise) and totally transfixed by his teammate horse, who we were told to stand a good distance away from, as it is a nervous horse. 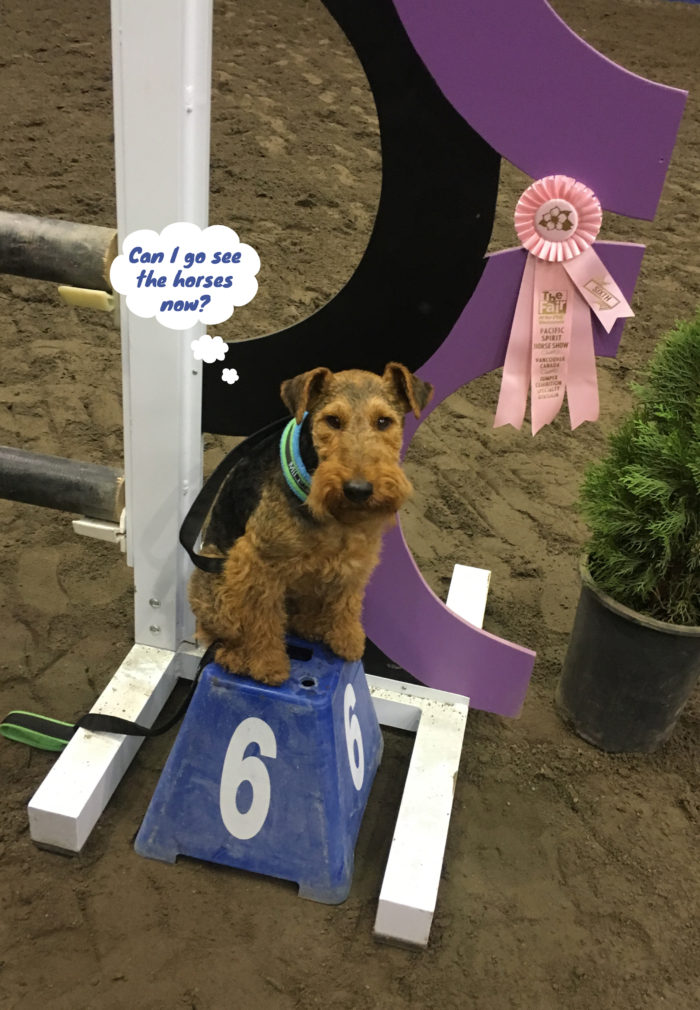 Our dog and horse team placed 6th overall. Not to shabby for our first Dog and Horse Relay – again, too funny! It was a really fun experience, and I was really impressed with Miles’ self-control and clear sense of pride in his agility skills. Imagine, a Welsh Terrier that can compete and run clean at a Dog and Horse relay competition. Crazy! One for the wild wiry terriers, indeed!