The following is an overview of Miles’ month of recovery after being seriously injured on July 30th, 2013. You can catch up on the backstory here. This August was a big month for us. Miles had survived a near-death experience, and the intensive aftercare (read more about it here) alone lasted nearly 3 weeks. At the bottom of the post, I have included my thoughts on many aspects of recovery. 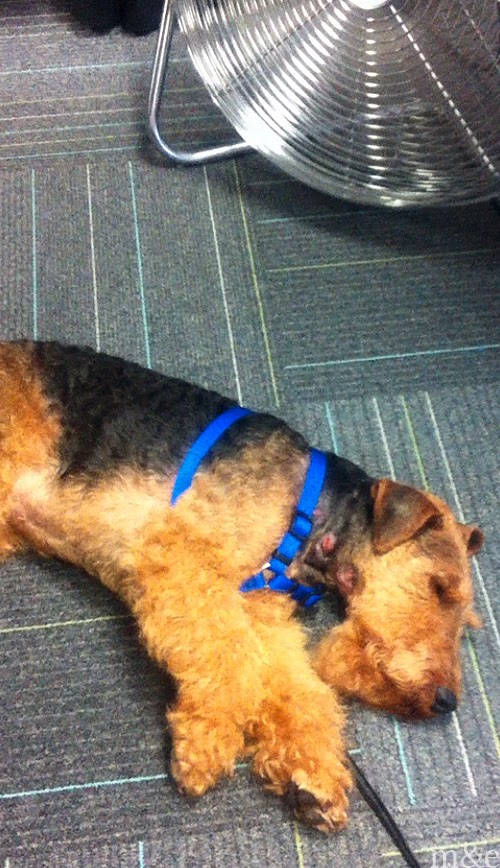 When we got home from Alberta, my sister was preparing to move to Scotland. Since Miles couldn’t play much outdoors or with dog friends, his outings consisted mostly of family errands. Above is a picture of Miles resting in a sporting equiptment store. He found the fan right away, and plopped himself down in front of it. As you can see even in the picture above and video below, his sores were still in the beginning of the recovery phase, even two weeks after the incident.
Equipped with the painkillers my vet gave us, Miles was able to relax and blow off some steam during the achey second and third weeks of his recovery! 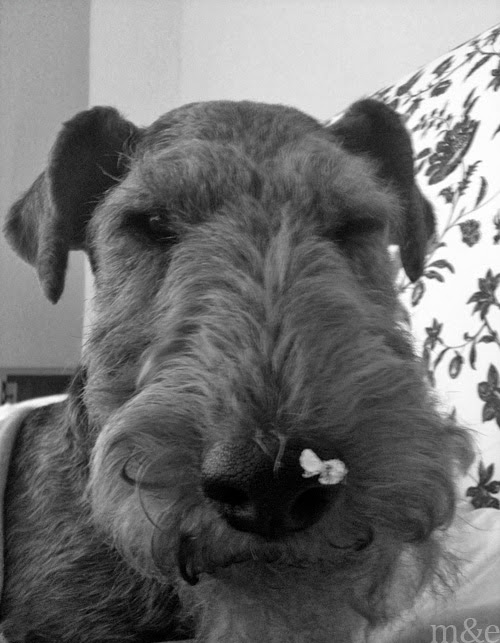 I tried to keep things at home low-key. Miles was happy to nap a lot, and to help me with crafts around the house. Here he is helping me do a metal foiling project… 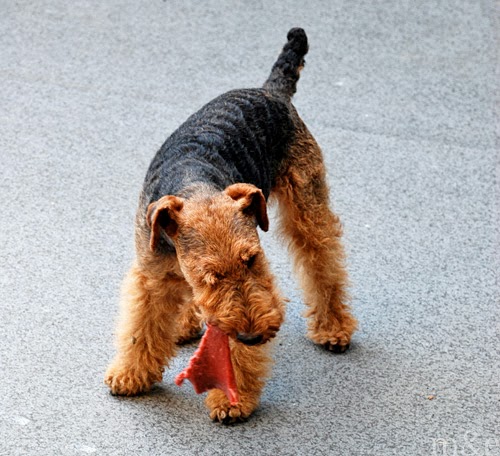 {  One bonus of surviving a near-death experience?
You get a few perks here and there. Like steak.  }

Up until the last minute, I wasn’t sure if we’d go with my parents on a little road trip we’d planned a few months before Miles was injured. I ended up deciding a change of scenery during this stage of his recovery might be a good thing. His wounds were just beginning to close, and because he still couldn’t really play outdoors, I figured the exercise of walking around a different city would be good for us. You know how they say bad things come in threes? Well, I am not superstitious, but the trip wasn’t great for my parents. My dad, who has a stomach of steel, endured a nasty stomach ordeal, and, to top things off, my mom badly broke her arm. The morning after our arrival, everyone but me was injured or sick! 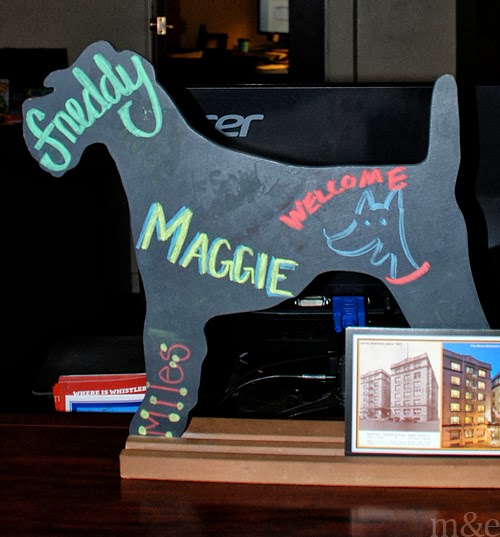 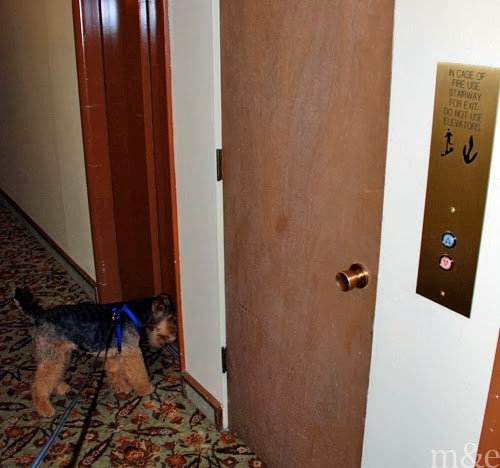 {  Miles loves to travel. Here he is waiting for the elevator to open.  } 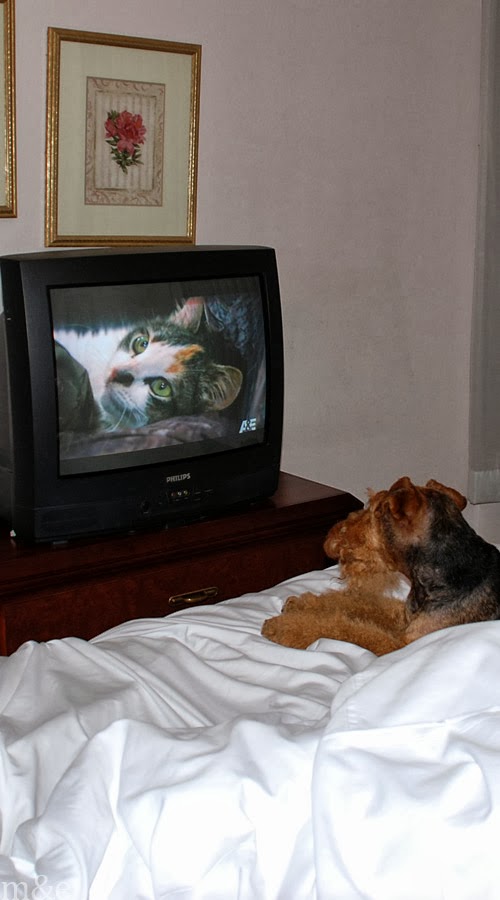 {  Miles loves hotel rooms, especially having a tv with lots of channels.  } 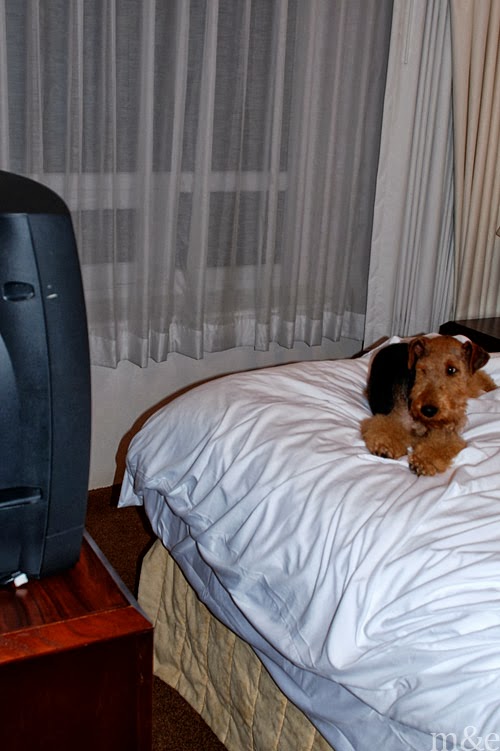 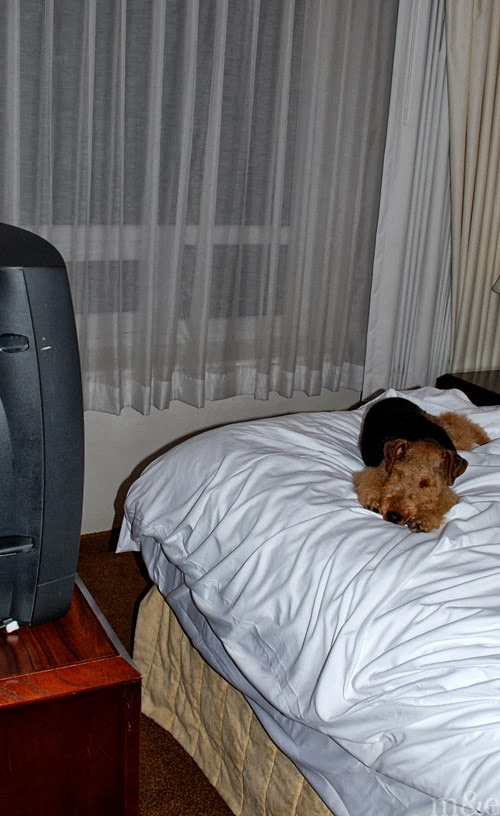 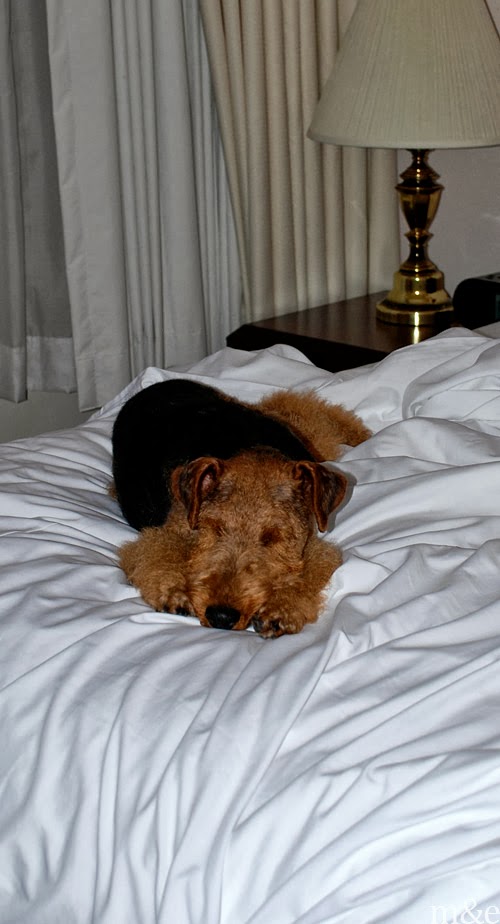 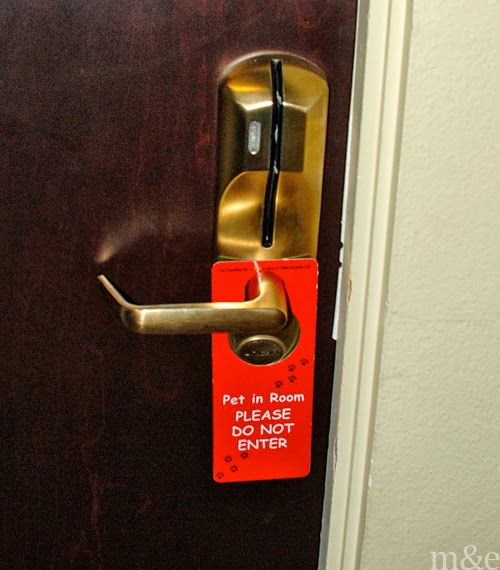 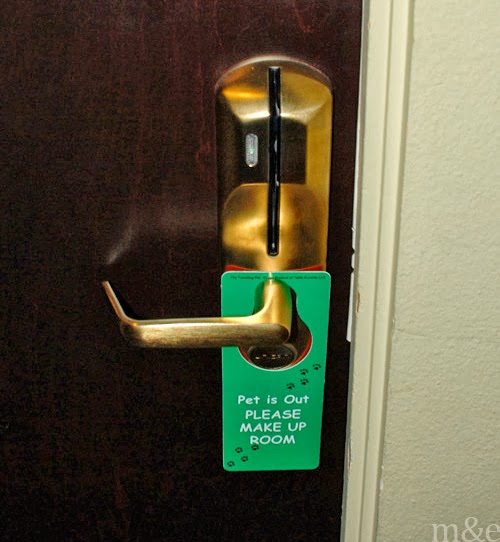 {  The hotel provided special door tags for pet owners… How cool is that?  }
Late August:
Emotional Side Effects
Ever since the attack, the normally laid-back Miles has been nervous, even at home. The slightest sounds from neighbors cause him to shake and emit a low worried rumble from his chest, and open windows produce a high level of anxiety. One night, I took a shower before bed. Afterwards I stepped into the bedroom to find the central lower area of the blinds completely ripped up, forming a perfect “lookout” for Miles. At first, I was irritated (we moved in July, so all I could think of what that the last thing I wanted was another trip to Home Depot). But soon I wrapped my head around his logic. The windows were open, it was dark out, who knows what was lurking outside in the bushes, ready to attack… Miles didn’t previously have a way to look out of the windows to better see and sniff out dangers… So in utter desperation, he made a lookout. Sometimes desperate times call for desperate measures — in this case, some impromptu modifications to our blinds. 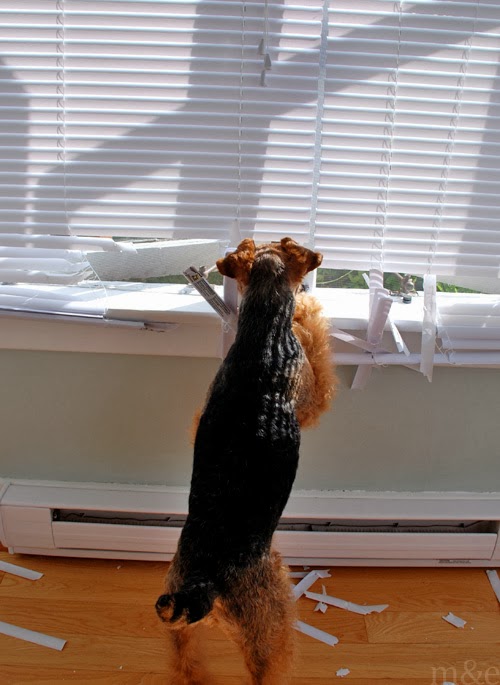 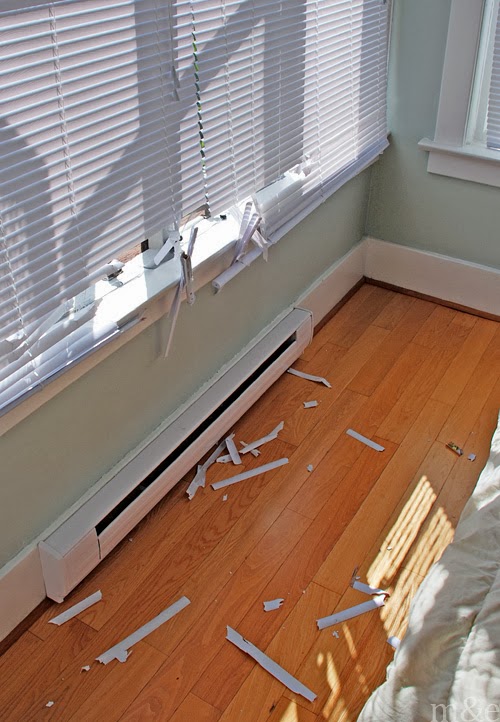 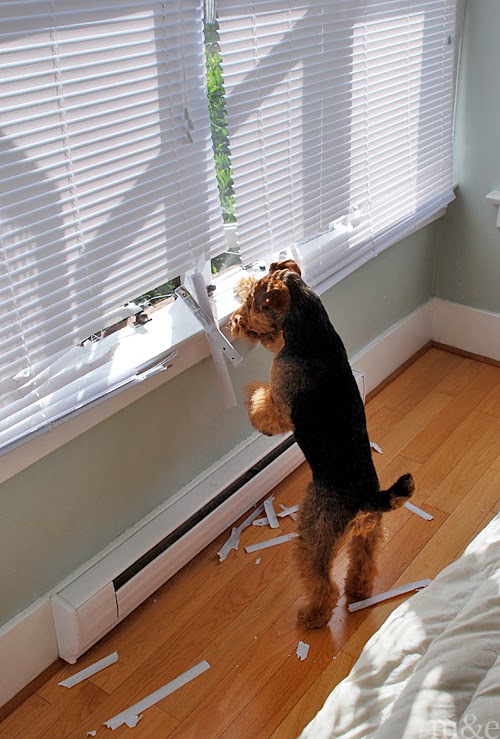 The funny thing about recovery is that it comes in stages.

First, the body and mind put all energy into survival. When the coast is clear, all energy begins to go toward physical healing. Once the physical healing process is well underway, there then becomes space for the stress to hit, and the body goes through a whole new set of stress-induced side effects.

I think humans often misjudge the emotional impact of trauma on other animals (for so long humans did not believe other animals even experienced pain!), because other creatures show pain and stress much differently than we do. Sometimes an animal will be in great pain and will be highly stressed, but will act relatively normally, to human eyes. Acting as normally as possible when they are injured is critical to their survival. Weakness attracts predators, competitors, and scavengers. Most other animals don’t even begin to really show how stressed they are until they are well into the later stages of recovery (or worse yet, critical illness). Humans are probably the only species that sometimes can have the luxury of showing how we really feel. That is right — showing pain and/or stress is a luxury in the greater world of animals. A very, very great luxury.

Having worked with all sorts of animals, I am familiar with the way in which many other species hide pain and stress — and how serious the impact of stress can be for any of us animals. Therefore, I knew Miles’ recovery would not be over when his wounds closed.

The first real sign of the emotional impact from Miles’ experience was his anxiety at home. I have put a barrier around the bedroom windows, which has greatly lessened Miles fear about open windows. When Miles gets nervous about noises, I give him treats for taking a break from his “guard dog duty” to rest in his bed. Both solutions have greatly reduced his anxiety at home. While it is inconvenient to have a barrier in the bedroom, and time consuming to have to babysit Miles at times when I didn’t used to need to, I know both are temporary routines that will help reduce his anxiety right now, help him learn not to expect the worst, and ultimately, help him get back to normal.
Miles is an openminded and friendly guy to the core. The attack did nothing to dampen his love towards the world. But he is not his old exuberant self when it comes to dogs. He is tentative. Excitable dogs frighten him. And I am careful not to act worried around or about other dogs. I remember from my days of horseback riding that other animals can read even the tiniest physical cues of stress. And who knows humans more than dogs? They know us better than we know ourselves! I am also careful not to pressure Miles to meet dogs he isn’t sure of. It is all about balance right now. Things have been going really well in this area — he has relaxed a bit recently, even making a few new friends.
Sadly one physical side effect of stress a few weeks after the attack was that Miles suffered some painful stomach issues. More time at the vet’s office, more medications. I wasn’t surprised by this, given my thoughts on the stages of recovery.
Over the last month we’ve attended two agility competitions. I knew that doing so would be a bit of an experiment. Half the time, Miles performed well, although, with a significantly lower amount of drive. The other half of the time, he refused to do anything at all, and stood there looking around, anxious and worried. He showed great control and never ran out of the gate, which speaks to all of the work we’ve done together, but he just stood there looking me in the eye, and looking at the exit, asking if we could leave. I was devastated to see this new side of Miles, but at the same time, loyal to moving forward, and making his recovery as smooth as possible. We’ll just have to take things very slowly. My solution over the past few weeks has been to work very, very hard at being an even more enthusiastic and positive handler (which is a challenge, as my personality, as previously described, is not overly expressive by nature). At agility class, I am pushing myself to be as energetic, cheerful, and as fun as possible. I am seeing results from this! For the first time in weeks, today Miles actually romped around the course in class.
I’ve also begun using the amazing tuna training treats (recipe here) at every training session, which seem to be the most delicious treats Miles has ever tasted, and are a great motivator for him.
Slowly but surely… We’ll get back up.
ShareTweetPinSend
Previous Post

Getting Back into the Groove