by Emma Kesler, CDBC, CPDT-KA
0 0
0
I took Miles out this morning, and then brought him to our veterinary clinic when it opened – at 8am sharp. I handed over Miles, a blanket, and a little tupperware of ZiwiPeak. At 10am, our veterinarian called to say that Miles’ surgery was finished, that it went well, and that I could pick him up at noon.

I stood there waiting anxiously at the door between the clinic and the waiting room. When the technician brought Miles out, the leash was in my hand, and he was dragging me towards the door. He couldn’t get out fast enough. He woozily sat upright in the car as we drove the 5 minute trip home, bleary-eyed, whimpering, and tilting his head at my nonstop banter about how we’d be home soon. He was very out of it, and probably doesn’t remember that part, or the following hours!

We spent the next 4 hours on the couch together, his body resting on top of mine. He was crying a great deal, but cried more quietly and closed his eyes most of the way if I stroked his chest and spoke softly to him, which I did continuously. The poor little guy couldn’t really relax, but, with the attention, he was able to breathe and wait it out…

At 2pm I was allowed to give him his pain medication and his breakfast. Miles is definitely a member of my family – no matter how bad he feels, he still has an appetite! I then took him out for another try at a pee (when first home, he had no interest). I set him on the grass, and he cowered in fear. Oh to see a ‘full-strength terrier’ put his tail between his legs is a heartbreaking moment! Then, I had a brilliant thought: there is this little shrub nearby that Miles always is desperate to mark. I carefully picked him up again, and placed him in front of it. Just like his appetite for food, surely enough, he couldn’t resist. Voila! First pee, accomplished.

Around 4pm, he was with it enough to stand up, and then, the second phase of his recovery from anaesthesia kicked in: he wouldn’t settle. He was extremely jumpy and became absolutely terrified of me. Getting the poor little guy on-leash and out for another pee later on was a slow and delicate process involving lots of treats, and sloth-grade slow movements on my part.

It is especially tough to watch a dog go through the emotional ups and downs of coming off of anaesthesia, because they have no way of knowing why they feel so discombobulated. On top of that, every dog (or person for that matter) reacts differently to the process. Poor Miles went through two really awful stages: the frightened clingy crying phase, and then the terrified paranoid phase. Both prevented him from being able to rest… Poor Miles!

Things got much better when my dad showed up at 7pm with takeout. Miles rushed to greet him, wagged his tail, licked my dad’s fingertips, and then rushed off to drink water for the first time! After dinner, Miles desperately wanted to join us on the couch. He was still very afraid, so he hovered, whimpering. Finally, my dad’s gentle encouragement was enough to soothe Miles, and he finally took his spot between us. At first he was wary, and sat stiffly upright. But soon enough, he was doing the “head drop, wake up, head drop, wake up.. head… drop… okay….. slowwwww wary plopppppp….. zzzzz z z  z   z    z”

Other than getting up for more water occasionally, Miles has been sleeping ever since. The post-anaesthesia roller coaster may not be over entirely, but, I am so grateful and relieved that my little buddy is fast asleep now, finally.

What a rough day. 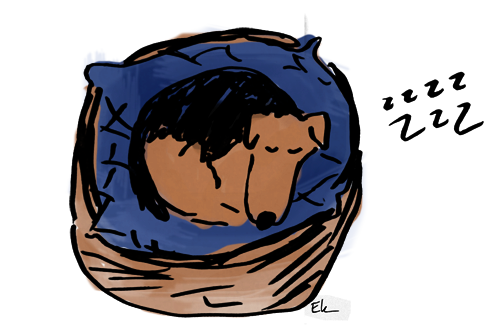 Miles’ incision is a bit over 2 inches, and he has 8 sutures. If you are curious what it looks like, I will be keeping an ongoing photo album of Miles’ recovery from surgery here.

Before Your Dog Has Surgery: 4 Planning Tips to Help Make the Experience as Smooth as Possible