Our First Ever Three Master’s Agility Q’s All at One Trial! 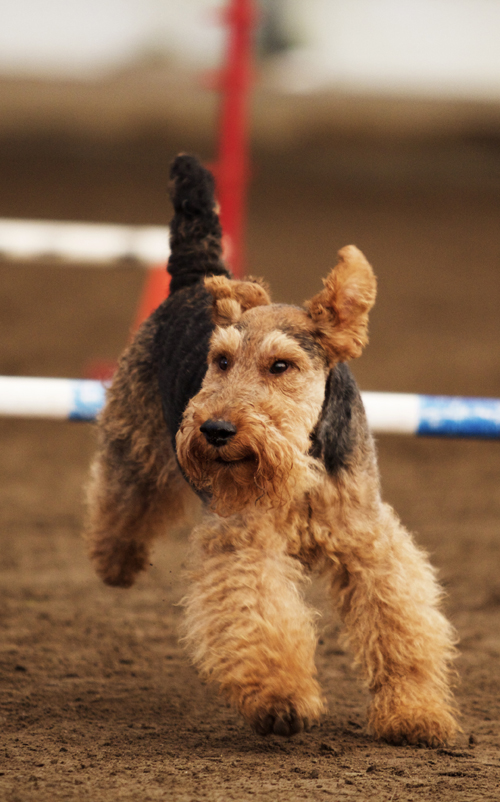 { Photo of Miles by Chris Paul }

Our entrance into the Master’s ring unfortunately coincided with the peak all of our health ordeals, when we were both feeling terribly crummy. It was a tough time, because some of the experienced people misjudged us, and a few weren’t afraid to make comments. So, with that said, it was fantastic at the end of 2014 to finally be able to do a trial where Miles and I were feeling good. It ended up being our best trial of 2014 — other than this one of course!

The trial was a 2-day event. We signed up for a few events on the first day, which would also be the day that my sister and her boyfriend, who were visiting over the holidays from Scotland, were going to come and watch us. This was so, so, so exciting for me. My sister has never seen us do agility, and her boyfriend loves dogs. My dad was nice enough to drive them out to the trial (which was an hour away). I was really excited that my dad would get to watch us too. When I saw the Jumper’s course map, I baulked. It looked really challenging! Lots of twist, turns, and traps. We were one of the last to be scheduled to run it, so I was able to watch some of the other Master’s teams, almost all of them highly experienced competitors. Seeing a lot of mistakes being made by people I admire, I began to get really nervous! It isn’t often the pro’s forget the course. My dad and Sean were watching with baited breath to every run, as they understood the course! They definitely saw how hard it was, and oohed and awwwwed as teams almost got it, then fell prey to the tough twists and turns. While I was watching with them, I only witnessed one team get it, which wasn’t comforting. Not only that, watching other people forget their way and make wrong turns is never good for one’s own memorization of the course! Before I knew it, it was time for Miles and I head out onto the course.

Below is the course map, which I have animated to show the path. It runs continuously, so wait to pay attention until you see “Start.”

I have no memory of our run. All I know is that when we finished, my dad and Sean were cheering, and beaming at us with huge smiles. My family got to witness Miles and my first-ever Master’s Q –and it was the toughest course we’ve ever done! I was elated!!!

The next day, for fun, I had signed up for Team with our friends Margaret and Rags.

Team: When it is your turn, you and your dog and your teammate and their dog all enter the ring. Whichever team is going first can line up near the first obstacle. Whichever team is going second must wait in their marked box that is right up against the course. When the time starts, the first team runs a numbered course. The second they are done running, the handler collects the dog in their designated box, and yells out to their teammate to go. Team A waits in their box. Team B then leaves their box, to do their own prescribed numbered course. The game ends when the second team finishes their course.

A few days before the event, I received my conformation for the trial via email. I simultaneously got an email from Margaret telling me that she had not gotten into the trial. I panicked. I had only intended to do Team for fun – what if I got randomly paired up with someone really good? I opened a blank email, and began to write a note to the trial coordinator to request that Miles and my Team entry be pulled, when,

BOOP! A new email came in. Our confirmation for team, complete with our Teammates’ names.

I didn’t know who they were, so I tried putting their first names into google, along with the word ‘agility.’ “Maybe they are new to Master’s too!” I thought. Immediately a link came up – it was a listing of the top AAC agility dogs of 2012.

Yikes! Us, teamed up with a great team? I was not comfortable with this at all. If I went first, what if I couldn’t catch Miles as the other dog began to run? If I went second, would Miles go nuts wanting to meet this fun new dog running around in the ring as we waited our turn? Miles is so high-drive. Movement is his greatest weakness. It is one thing for him to be running a course of his own – but to essentially share a course, and wait as another dog runs it? No treats, no barriers or incentives, other than handler-focus?

In the morning, I approached the other handler. I introduced myself, and sincerely offered her the chance to switch us for a more experienced team. She was very nice, and said, “No, we will stay with you, after all, that is how it should be, a good mix of experienced people and new people.” I thanked her for the opportunity.

Before I knew it, we were entering the ring with our new teammates. I had chosen for Miles and me to go second (course B). I lead Miles into our box. I took a deep breath, and set Miles up so that he was sitting facing me. I had him do simple warm-up focus exercises with me for the full duration of Team A’s run. I managed to maintain his undivided attention, despite the movement and sounds all around us! When our teammates finished their course, the handler collected her dog into their marked box, which was next to ours, and yelled “okay!” We set off.

Miles and began to run our course (Course B) at full-speed. The true test was on: Would Miles focus on me, or the other dog in the ring, who he had just heard wildly running around? And to my great happiness, Miles followed me! He ran right past the other dog (if you look at the above map, the other team was in the “A” Box the entire time we ran our course — Miles had to pass our teammates to begin our course. We had one minor mistake  – Miles fumbled near the beginning of the 12 weave poles, skipping one pole. I quickly backed up, got him back to me, and re-directed him back into the beginning of the weaves. He then busted them out beautifully! We had gotten 5 faults for that mistake – but when the results came in, our team was so under the allotted time, that we were okay! Not only were we okay… Despite the course fault, we were still way under time! I was so excited to go and tell our teammates that we all Q’ed. I am so thankful that my teammate gave us the chance and was so encouraging.

We have little experience in Master’s courses, but Miles and I have attempted Master’s Gambles before. Each time, Miles got the opening, or the closing, but never both. It was our last run of the day, and we were both tired. Our instructor Mary was there, and I asked her advice about my plan for the opening. Mary convinced me to try something that I wasn’t overly confident we could pull off in time. It was an exhausting weekend (we got in a car accident the night before too) and I wasn’t sure we’d have it in us. When it was our turn, I followed the plan Mary and I had discussed.

Below is the course map, which I have animated to show our path. The game of Gamblers is made up of two parts: the Opening, and the Closing. In the opening, YOU get to decide what obstacles you do. Each obstacle is worth a certain amount of points, and in the opening, you have a short amount of time to attempt to get the amount of points you need. After you are done your opening (aka the buzzer rings, indicating your opening time has ended), you then proceed to the closing. The closing is the same for all teams. The Closing is your “Main Gamble,” meaning a numbered course which the dog must complete, while the handler stays behind a marked line. It is a challenge of distance handling. In the map below, during the gamble, I have marked the line in yellow and I’ve indicated where I was standing. I had to be behind that line while Miles followed my verbal/visual directions to do the course.

Miles did everything I asked him to, and with gusto! Before I knew it, we’d finished our opening plan. We had enough points for our opening, and we still had time. (As we gain experience, the Opening will be about collecting mega-points, but for now, all I care about is completing obstacles properly, and completing enough of them!)

I told him to go over an extra jump. Still no buzzer for the closing. I had him do the jump again. No buzzer. We were running out of things near the closing to do! I sent him to the teeter, and had him do really, really slow contact on it. He finished it, slow contact and all. Still no buzzer!!! I couldn’t believe it. I asked him to do the teeter again, and finally, as he descended, the buzzer rang, indicating we could begin the closing sequence (the distance work part). I directed Miles to the closing from the proper distance. Without hesitation, Miles busted it out flawlessly, all the while listening intently to me for direction.

I cheered to Miles so hard. What an incredible end to our best trial yet. Miles was beside himself with pride and joy, bouncing happily around me. I rewarded him heavily with treats and praise. Invisible confetti exploded all around us, as we celebrated together, our own private party. Later, talking to my sister, she said, “You know I don’t know a lot about agility… But I wanted to say one thing about you guys as a team. Whenever you finished a great run, you celebrated in a way that Miles could clearly know how well he did. Not everyone did that with their dogs. I think it is great that you share success with him in a way he can understand and enjoy. You guys work so hard, and you are a real team.” 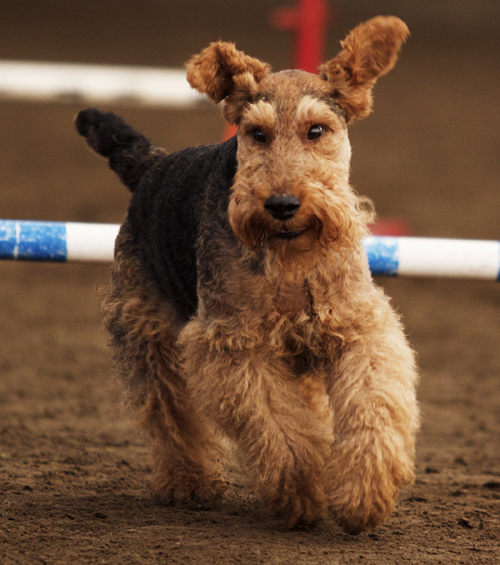 { Photo of Miles by Chris Paul }