This past weekend, Miles and I tried out our first AKC agility trial. Now that Miles and I are a good agility team, I was ready to try something new and unfamiliar. Since we did a lot of new, scary, and exciting things in our agility career last year, the timing couldn’t have been better for trying something new.

I already knew that two familiar faces would be at this AKC trial — my friends Laurel (Wheaten Terriers) and Joanie (medium Poodles). Instead of rushing to them when I walked in the door, I found someone I didn’t know, and told her I was new. She was really nice, and told me how to check in, about measurement, and other basics. Once the technical details were covered, she added in a cheerful but hushed voice, “You will find that there are a lot of really great, nice people! And a few to avoid… Those ones will be clear soon enough, but pay no mind.” I smiled widely, and felt a big sigh of relaxation release from my tense stomach. “Sounds just like home,” I thought! “I can do this!” (Note: I and many others did encounter one such person — and her cellphone’s ringtone, which repeated unrelentingly in the crating area, was what my native Oregonian self can only refer to as “Fred Meyers” muzak!)

I hauled my chair and Miles’ crate stuff inside to the corner where my friends had set up, and stuck the ID sticker on my sweatshirt (which of course I would later put through the wash…). Then, off to measurement it was. Miles hopped onto the measuring table, the eager easy-going guy that he is. See a measuring picture from our second-ever agility trial here. Miles clocked in at the same measurement he was when we stared trialing: 15.5 inches. In AAC, I have Miles running at 10 inches, a height lower than he’d be if I had chosen to run him in Regulars. For AKC, I decided to start him in Regulars, at 16 inches, and to see how it goes. 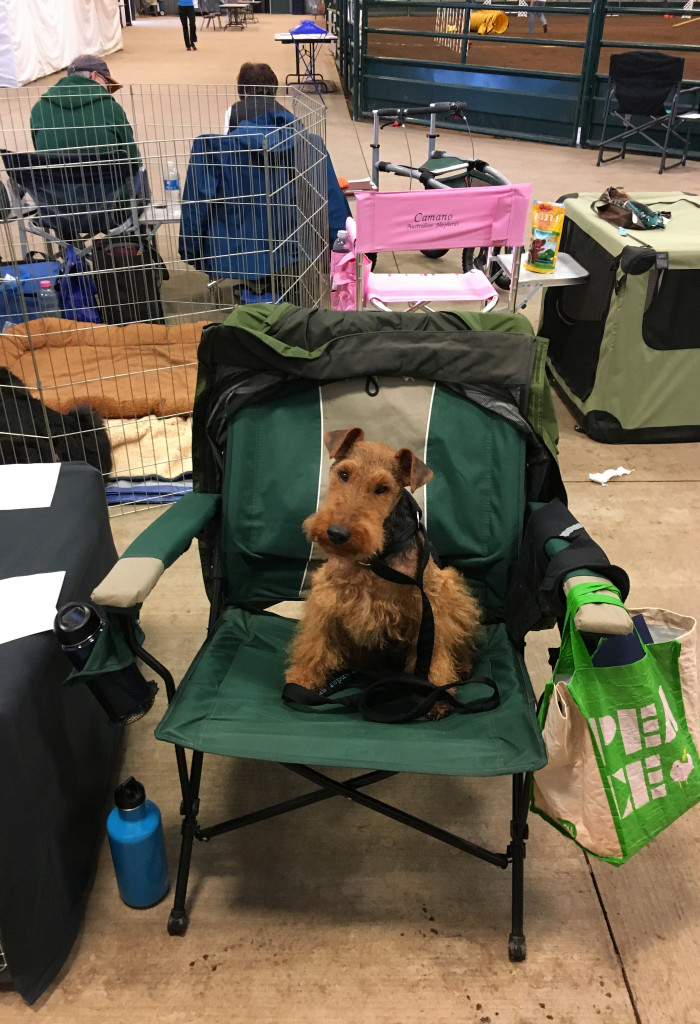 Before our first run, I recognized two more familiar faces. I approached one of them, with the awkward “I know you — don’t I?…” They were a couple I’d seen before at AAC events, but had never officially met. It is amazing how you can be around people so many times, but never actually meet them for ages. I officially met Linda and Gerhard at this trial, and man, what great people they are! I had a blast competing with them all weekend. We all have Masters experience in AAC (and for them, in other venues too), and we were all trying our dogs for the first time in AKC Novice. So it was nice to have buddies in a similar spot.

The first class we all did was FAST, which is a Gamble-style class. In FAST, you get a short amount of time to get out on the course to rack up the points needed to Q, and beyond that, to place. Each obstacle is assigned a point value, and can be completed once for points, or more than once for no faults and no points. It is a game of strategy and speed: you need to plan a good path, and go obstacle-to-obstacle as fast as you can. There are a few obstacles designated as the “SEND” portion — if you complete them from a small distance as marked, you get a 20 point bonus. Miles did the send portion no problem, and all was going well until we were three points away from Q’ing. At that point, Miles decided to take off and spend the remaining 25% of our course time to go and sniff the back of the barn. Oh Miles, okay.

The next two classes we did were the important ones: Novice Jumpers, and Novice Standard. The Jumpers was really nice, as a Novice level jumpers should be! Beautiful flowy lines that Miles and I haven’t seen in ages! No backsides of jumps!!!! For a team that isn’t beginner anymore, I realized that the flowy lines present extra challenges for experienced competitors, because they result in increased SPEED from dogs that feel confident running agility. Clean lines allow for the kind of extreme speed that complex courses hinder. Yikes! I was excited by the lessening of the importance of the tunnel in Jumpers, made possible by the inclusion of Weaves. Weaves were a welcome addition for me — but they wouldn’t have been if I were running a green dog.

The Novice Standard was noticeably more challenging than the Starters Standard in AAC trials — although more faults seem to be allowed for Novice AKC. Still, there was one very tough handling choice to be made on the Novice AKC standard that we encountered, that all of us had trouble with.

It was also a shock to see the pause table again — it wasn’t a fun part of being a beginning competitor. I don’t think anyone starting out enjoys the pause table. But, for us, it was a welcomed advantage, given I now had the ability to lead out, mid-course (as shown below).

We left that day with a Q & first place in both Novice Jumpers and Novice Standard. I was a bit nervous that day, so I was happy we had a good time and did well.

The next day, we came back. The first class I had entered us in was another first run of the day that didn’t really matter for championship points — T2B, which is similar to AAC Steeplechase. Both Steeplechase and T2B are open to all levels, and there are no separations of Novice vs. Masters competitors.

I got there at 8am and we ran our T2B at 8:38am. The problem was that I hadn’t realized how long the wait was for the Novice classes that day (Jumpers & Standard) — which didn’t even begin walking until after 2:30pm. Linda and Gerhard were in the same situation. Between the three of us in three classes we had that day, I think only 1 Q was earned. Next time, we all said, we will plan better. There are a lot less classes to enter in AKC, so scheduling is a lot more important. Even though in AAC the important runs may be similarly few and far between — there are still a lot of other runs that can be entered to keep the day fun and going.

It was great experience, and I am looking forward to more AKC agility. Time will tell if Miles stays at 16″ jump height — I don’t think Welsh Terriers were meant to jump so high. They sure are enthusiastic though — Miles put all he had into clearing those jumps. You’ve got to give praise to the determination and gusto of a Welsh Terrier.