This month a year ago, my Agility classmates convinced me to go to our first Fun Match. It was Miles’ first time attempting to do agility off-leash in such an exciting environment. He had never been in a barn before, never seen horses and certainly had never been around so many dogs in one space before. I had no idea what Agility games were and forget that — I couldn’t remember a simple numbered course! Miles still couldn’t do the teeter and he’d never even seen a competition-height dog walk. So how did it go? To my surprise, the experience ended up being really positive. I walked away impressed that Miles didn’t leave the ring and proud that we even did a little agility while in there! The judge, Tracey M., was extremely helpful and encouraging. Having such a great judge made a huge difference for us. It meant the world to me that she made us feel so comfortable. I was able to really enjoy the experience because of her.

Fast forward to the same month, one year later.

Last Sunday, Miles and I attended our second-ever Agility Trial (competition). It was a well-attended event, hosted by a club we like, at a barn that is an hour away from our home. The thing I find about Trials is that they have a completely different feel than Fun Matches. It can’t be avoided: there is tension in the air. My first Trial I was so nervous that I didn’t sleep for days and it was very clear that I transferred this anxiety to Miles — who expressed his interpretation of my distress by doing wild zoomies in our first run, leaping on judges in every run and once, doing a little hop off and then back on the pause table (which sadly cost us our first potential Q*). How is it that some dogs can take anxiety and transfer it into fun for themselves? I wish I could figure out how to do that… Our first Trial was far from a disaster, but I realized that to do a real trial, I would have to really wrastle my anxiety like a wild crocodile. Given I got Miles out of puppyhood, I should be able to accomplish that, I thought to myself. Also, I kept reminding myself, the last Fun Match we attended, we were on fire! So I was determined to channel that energy into our second real Trial. I thought hard about what I do differently at Fun Matches, aside from taking treats with me into the ring. I realized, I talk to Miles a lot. I smile at him a lot. We listen to music on the way there in the car, me laughing at his reaction to the stranger noises in songs. So, I did my best to wrastle my nerves and recreate the experience. Sure, I wanted badly to do well this time around. But I stifled that thought and shoved it mentally onto the backburner and focused on having a good time.

*A Q is a “qualifying” run. A qualifying run is whatever the Agility association you are competing with considers to be a PERFECT run for your level. Q’ing is more important to most people than placing. Q’ing is a lasting and personal achievement, as means that you have earned a “leg” towards a title. After a certain number of Q’s your dog is awarded a title and you can move on to the next level.

We arrived early to the trial and set up our spot at a leisurely pace. I realized right off the bat that keeping my cool would be hardest in the beginning, because all of the experts– the Master’s level dogs and people, were there in the barn intensively practicing and competing when we arrived. Border collies everywhere, off-leash, zipping around with their people. It was an incredibly intimidating scene for a newbie to walk in on. I felt quite out of place setting up my spot and even more awkward when I accidentally walked through an area that is used for jump practice. I didn’t realize people would be running their dogs off-leash in every spare bit of space. I was promptly informed of my mistake. After I’d set up our little personal camp, more carefully trying to navigate the expert competitors and their practice space, I took Miles to get measured a second time. Agility is sort of like boxing. There are classes, in this case built on dog/jump height. Your dog needs to fit a physical requirement to be in the class you prefer. After the judge marked Miles’ height on his official Agility card (which was no small task — he was squirming like crazy watching all of the border collies) I realized something. I hadn’t seen her in a year… But this was the same person that judged our first Fun Match! Tracey! 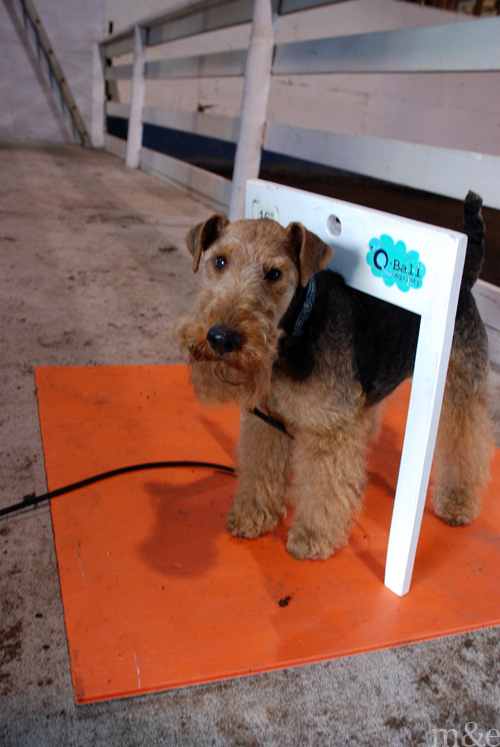 Finally, it was newbie time in the cold barn. Our first run was a Gamble. Being less saturated with anxiety this time around, I was able to geek out and actually plan my own strategy. By myself! Plotting points, plotting moves! I carefully mapped out a game plan for us. Miles was buzzing with excitement by the time we got to our turn. He always has trouble waiting so long to run for the first time. So how did the first run that day go? We did really well! We worked together and despite wasting a little time doing some overly excited twirls, Miles banged out the fastest of all of the Starters Gamblers times. We got both of the mini-gambles! When our final gamble (a sequence of 3 obstacles from a distance) was in the bag, I shrieked with joy and flashed onlookers a healthy dose of my butt-crack as I reached down to collect my Welsh terrier prize. I didn’t care about the shock of cold air nipping at my bum. All that mattered was showering Miles with praise! I saw my teacher Nicole nod from the corner of the ring, indicating that we had Q’ed. WE Q’ed! OUR FIRST Q! I waited to completely explode with joy until the results were officially in. But Miles would have never known the difference, with the amount of hot dog chunks he received.

Our second run, we did NOT Q. I was thankful that we did not, because, I did the unthinkable. I forgot to remove Miles’ collar. This is an instant elimination, although Tracey, being the kind person she is, didn’t say so until we were done running. We racked up 10 faults and the eliminating mistake, but did run the whole course with 10 seconds to spare. At least we are getting more efficient. A lot of nice people came by our spot to tell me that they’d tried to help tell me that I’d left the collar on, but I didn’t notice. I really didn’t mind. I was elated that we had already gotten our first Q. Everything from that point on was just good practice. 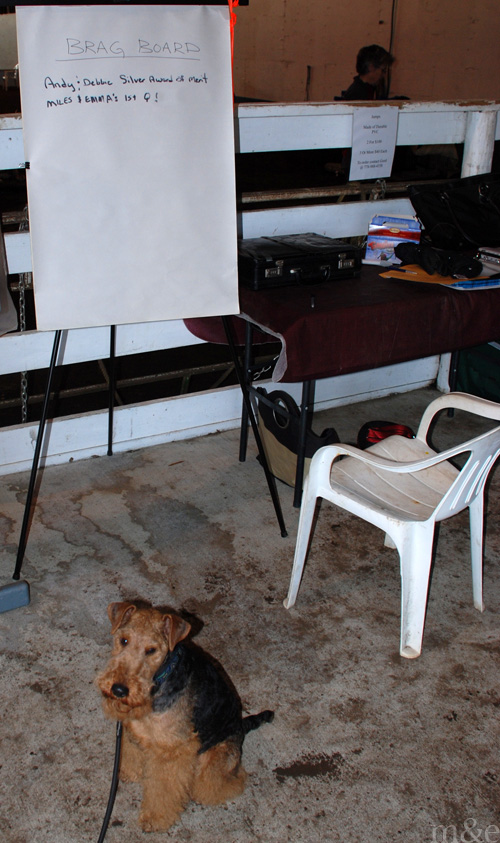 By the time we were lining up for our third and final run, it was dark out, very cold and the crowd had thinned to a few brave souls. This was a Snooker run, which seems to be a game dreaded by newbies. Why? Because it is confusing and damn hard. I only learned what it really meant a month ago, from a little class taught by the awesome judge ‘Turbo,’ aka Richard. It involves planning the first part of your course strategically to complete three sets of specific jumps paired with obstacle sequences. Sound confusing already?! Unlike in Gamblers, if your dog touches an extra obstacle, you are immediately OUT. Since your choices of which obstacles to do are fairly selective, it can end up being very challenging to direct your dog to exact combinations of obstacles without confusing them into touching something else in the process. In the two Fun Match Snooker runs we’ve done, we’ve been eliminated immediately because I did not have enough control over and/or gave crappy directions to my buddy and he touched an extra obstacle. In addition to the challenging opening of a Snooker run, the closing sequence is also more difficult. The closing is a numbered course, but instead of obstacles 1, 2, 3 and so on, it will be something like 2, 3, 4a, 4b, 4c, 5, 6, 7a, 7b… Which can really get confusing. Especially for the memory/number challenged people like me. You can’t pause and think, “Does 4 have two obstacles, or three?” If you take too long to think and have a very excited dog, you are doomed. By then he’ll be across the barn and back and the buzzer will have gone off a long time ago.

I came up with a game plan with a fellow competitor that we planned with survival in mind, but my instructor Nicole took one look at it said, “Well, your opening sequence doesn’t rack up many points, so if you do that, you’ll have to finish everything — really, really fast.” I asked how I could do it better. “Well, she started, why not plan it so that you steer through a somewhat more challenging sequence in your opening, like this.. And then you can just go from here?” I felt worried that I wouldn’t be able to follow her advice. But then, a realization, and shock hit me: I understood what she was saying. Her alternate course made sense! Isn’t it great when you work really hard over time, and suddenly that little lock gets removed from a little pathway in your brain? Ah knowledge..

We got out on the course. I remembered to unsnap Miles’ collar, which caused the judge flash me a knowing grin. I calmly instructed him to sit and stay. I walked around 5 feet away, took a deep breath and then released him. From there, it felt like we were sailing. Miles followed me carefully and quickly and did exactly everything I asked. Which not only means he was listening to me — it means I am getting better at giving him clear instructions! Although during the opening he misunderstood one signal, my signal for a tunnel, but he quickly recovered and went in the other end when I tried again. We not only did our planned opening for maxium points, but finished our closing sequence nearly 10 seconds under the 60 allotted. The second we were done, Ms Tracey the judge yelled out, “NOW THAT IS A BIG, FAT Q!!!!!!” Miles and I were tired and in complete heaven. He leapt with joy. The moment was just glorious for us. Never in a million years would I ever have imagined I could do Snooker, or that Miles would blissfully follow my instructions through 20 close-together zig-zaggy obstacles without going near any extra ones. I collected our ribbons, which by then just felt like little bonuses and we continued to sail into the car and then home, happier than ever. I am still waiting for our first legs on Starters Gamblers and Starters Snooker to register in the official system. But damn, am I ever proud of how far we’ve come. It has been very hard earned. For both of us, together. 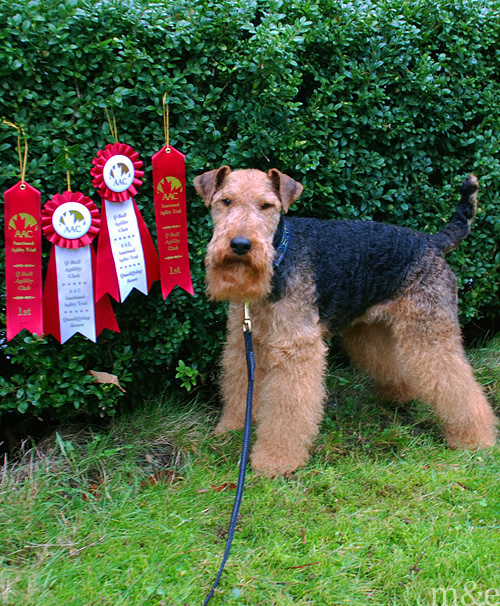 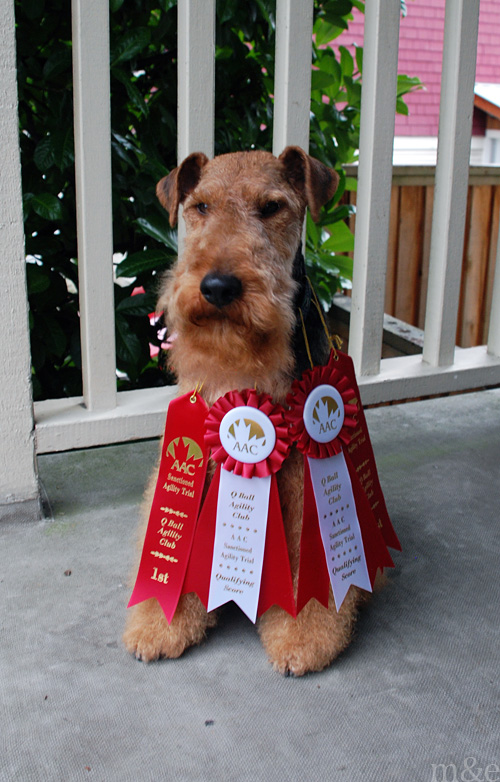