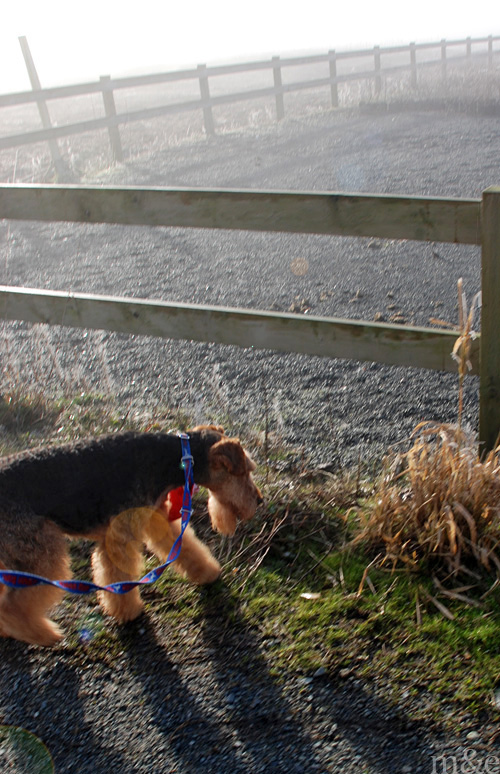 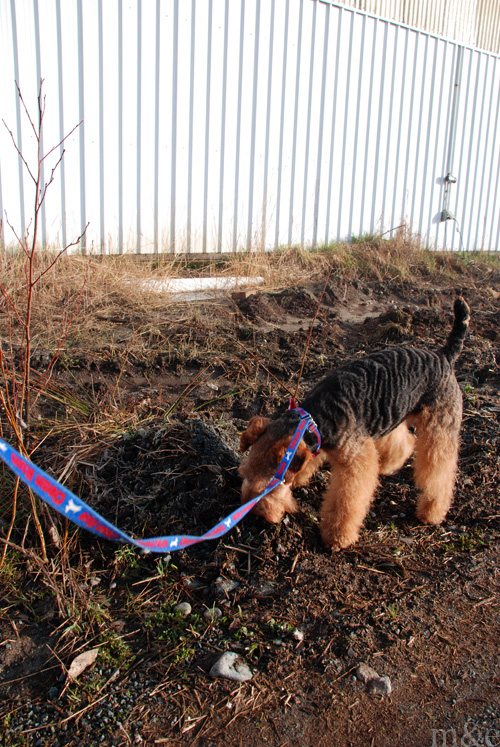 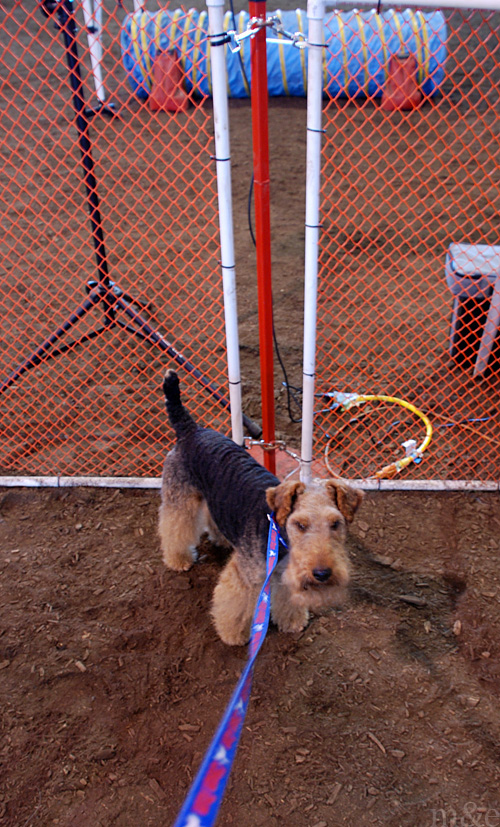 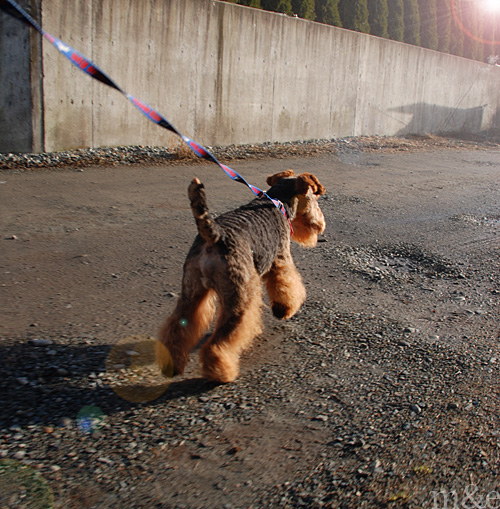 Our Third Agility Trial
To Mars and Back

A bit over a week ago Miles and I attended our third agility trial. We woke up at 5am for an unusually early start. I was determined to arrive on time so that Miles and I could do familiarization. Once again, we headed off to our trusted barn venue. When we pulled off the highway and onto the rural road, the air was so thick with fog that I could barely see a thing. I relied mostly on memory to anticipate the sharp curves of the road. Which for me, like many people, is quite an accomplishment before 7am.

Since it was our first agility event of the year after the holiday season and a busy January, I assumed that Miles would be busting at the seams with excitement. And he was. He nearly took my arm with him when I told him he could exit our car. This was the only event we have ever attended where Miles did not take a single break to rest or even sit. I think it was the combination of it being the first event of the year, that he is now used to the venue, and that both of us are becoming more familiar with real shows. A note to people with terriers and high prey drive dogs interested in agility: do fun matches and your first trials at barns, where there are good barriers between the crowd and the ring, and walls and a roof to lessen distractions of the outside world. This has really worked for us.


The day was successful on two levels. We Q’d twice (missing a third Q by a hair) and are now in Advanced gamblers. Two more Qs, and Miles will have his first official title. But more than the Qs, I realized how I have changed. This time when we fumbled, I felt relaxed in a way that I never have before. The kind of calm you can’t force, no matter how hard you try. It is the kind of calm that comes after pushing through challenging times, and always continuing on, no matter what. And believe me, Miles and I have had some very trying times since we started agility. In the beginning, people often expressed their doubts, often in some not-so-nice ways. I never let it stop me. I always came back to class the next week. People around me who weren’t into dogs or dog sports thought I was nuts — and so did a lot of people in our first classes. It wasn’t always easy to keep going.

Not to say I won’t ever be embarrassed again. Crazy moments are bound to happen. But, I feel like we’ve been through enough and tried our very best to the point where I now have the ability to handle the ups and downs with an ease that I couldn’t before. The strength was always there, but over time and after accumulated moments of courage, that strength isn’t now just about survival and endurance. A funny little backbone is slowly growing with that strength, and in so, my pride is beginning to be allowed a kind of flexibility I never really knew of before.

At this match, I looked around and saw friendly faces. Gaby, a two-time Nationals winner, is one of the most encouraging people I have ever met in agility. Gaby runs the club that has hosted the three trials we’ve run in. She has several border collies, whom she works with love and the kind of exuberance that seems to match their intensity. Nothing is more fun to watch than people who truly believe in working with their dogs. She stopped by at the end of the day to tell me how much me and Miles have improved in such a short period of time, and how great my work with such a tough-to-train type of dog is. And as usual, Richard (a teacher with the club and soon-to-be judge) came by radiating his ridiculously contagious positivity. I can thank Richard for taking the fear out of Snooker for me at the last fun match, which was no small feat. He runs with Sugar, a Yorkie who can give any border collie a run for their athleticism. This tall man and tiny dog look regal running a course. These are the kind of people that make all of the difference for someone new. I’ll never forget.


Miles and I did five runs. Two clean qualifying runs (starters gambler, starters jumpers), one near-miss (another jumpers), and then two write-offs (starters standard, steeplechase). We began the day with a wild “its our first run of the year” where Miles did the numbered course plus as many extra obstacles as he could fit in (sort of like watching someone strolling down the street while simultaneously darting in and out of stores), and the other was our “for fun” steeplechase run, where Miles was struck with brain freeze. He had trouble remembering how to do the weaves, which are normally one of his favorites. After his second attempt, he paced a few steps backwards and froze. He shot to Mars and back in that span of 20 seconds. Little icicles accumulated on his beard as his little body launched back to earth. I felt nothing but compassion for my teammate. Usually it is me, not Miles, who experiences such deep freezes. After lunch, Miles was back in the groove, and rocked our jumpers runs. Our instructor was there to judge the afternoon runs. We both were astonished that Miles didn’t take a second during either of our afternoon runs to ricochet off of her! She and I had been joking about him doing that for weeks. It was great to get a solid Q while being judged by our very own Nicole.

The main peril of the day turned out to be the weather, a hazardous variable that had not even occured to me. I am usually impervious to cold. The inside of the barn held in the bone chilling midnight freeze, and as the sun melted the ice on the roof, it began to rain inside. We were there eight hours, which in retrospect was probably too long. Miles got out just fine, most likely due to the crazed terrier adrenaline surging though his post-hiberation veins. I, on the other hand, being of the weaker human persuasion, did not fare so well. I made it to Tuesday night, but the following morning, my body had succumbed to one of the worst colds I have ever had. The kind where going to the doctor seems like an impossible journey to Mordor, culminating in a death mission climb up Mt. Doom.

A week later, I am still very sick and stuck in bed. So in the end, Miles and I both experienced trips to frozen Mars and back — his being 20 seconds of confusion, mine a week or two of bed rest… But, all in all, we accomplished what we set out to do. 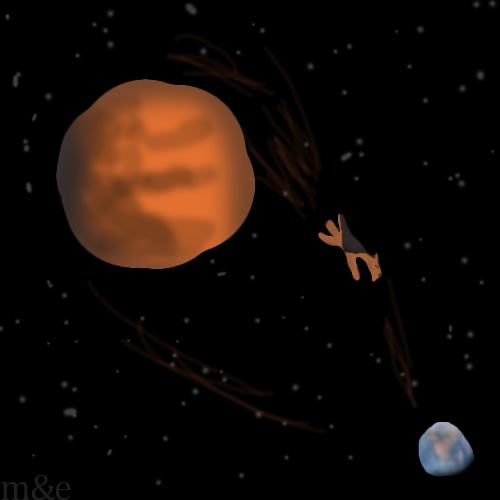 A Walk Through the Park