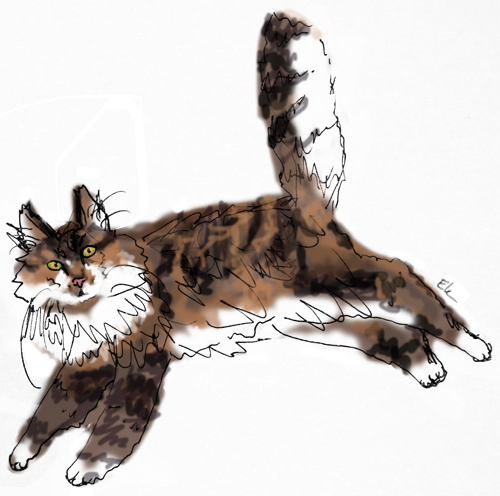 The last little while, I took a break from blogging. I didn’t expect to. But a lot of things happen that you don’t see coming. One recent night, my parents and I had to say goodbye unexpectedly to Briar, our 14.5 year old Maine Coon cat. Briar declined so rapidly, that we found ourselves forced to say goodbye before we had even processed why. We didn’t know that the average lifespan for a Maine Coon is 12.5 years, or that many of them die suddenly, like Briar did, of heart problems.
Briar was huge, wild, and fluffy. His big owl-like eyes gleamed of gold and green and were striking coming out of his furry face. Despite his size, Briar had the tiniest meow, that often came out simply as a noiseless mouthed expression. He was easily startled, and was scared of all sorts of things, like ceiling fans, and balloons. Despite his skittishness, Briar was a very social guy, who could win the heart of even the most adamant dog person. When we lived in the countryside, Briar would occasionally sneak in late at night smelling of cologne! When we lived in the city, I’d occasionally come home to see him sitting on the sidewalk, being petted by a large group of school kids. Like most cats, I am sure he lead many secret lives.
It is so hard sharing one’s human life with such wonderful creatures, knowing that they live so many less years than we do. But I believe the pain of losing such amazing friends is worth the joy of having known them.
ShareTweetPinSend
Previous Post