by Emma Kesler, CDBC, CPDT-KA
0 0
1
Tonight started off like a typical Thursday summer night for Miles and I. We ate our respective dinners, then I texted our friend Anka. Me, Miles, Anka and Ziggy the Boston terrier been going to the only park in our area that still seems to let dogs go off-leash. It is a unfenced circular park surrounded by mansions, that also happen to frequently be filming locations for big-budget movies. During the day the area is abuzz with enormous film crew vehicles and catering trucks, but at night, it is a nice quiet retreat from the city. Anka also is babysitting a shy poodle, Milla, who already loves Ziggy and has taken a liking to Miles as well.
On our way home, Ziggy yanked on his leash, ripping around a corner, right up the driveway of a mansion. Surprised, we followed him, and saw a couple standing there in the dark, looking helpless and worried. They saw that we had dogs, and told us that they had been following a lost dog and didn’t know what to do. Deep in the bushes, we found a completely immobile and terrified male pit bull.The couple had no experience with dogs, but had followed him a long way from a main street. I approached him slowly, taking my time to help him calm down. Eventually, I stroked his head, and he sighed with relief. The couple who found the lost dog agreed to stay with him while Anka and I got our own dogs home. I then drove back with my car, and it took three of us to get the dog in my car!
We immediately took him to the emergency vet that works with lost dogs, and the best possible thing happened! His owner came in. “Scarface” had been accidentally let out of the house by the two little girls he lives with, and had been missing for a few hours. In that short amount of time, he had traveled around 3 miles, and crossed a large bridge! Not only had the owner been calling everywhere desperate to find his dog, people had called in about a dog seen crossing the bridge alone. 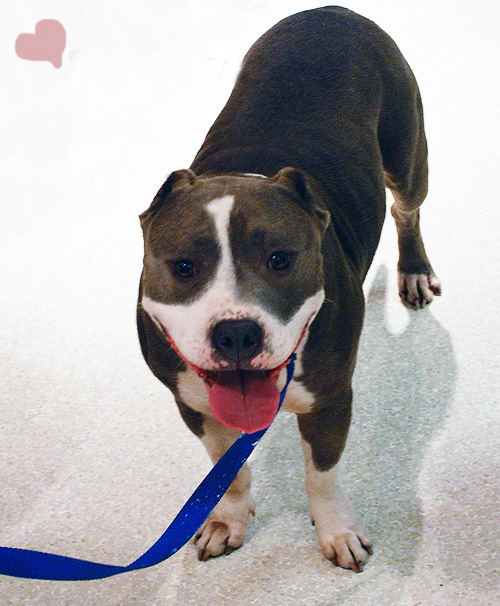 Scarface’s owner adopted him as a pup. His ears had become infected from cropping, and had to be further cropped by a vet to save his life. Soon after, he was swatted by a cat, causing a scar to form on his face, hence his name. He lives with a family who love him very much. By the time his owner got there, Scarface was up and about, ready to come see us all. What a relief that he was walking — but with a stiff limp. Anka and I let his owner go talk to the vet, but we left our contact information and look forward to hearing about his recovery — whether it be physically, emotional, or both! What a happy, happy ending. A late night, but well worth the emotional roller coaster.
ShareTweetPin4Send
Previous Post

Emma Kesler, CDBC, CPDT-KA is an award winning certified Dog Behavior Consultant and Dog Trainer who specializes in terrier behavior. Emma has worked exclusively with terriers and their people across the world for a decade, and shares her life with her Welsh Terrier copilot Miles.