Terriers tend to do things to the extreme. Miles is ridiculously friendly, and pours out love at anyone he meets. He is the first to meet and greet new dogs and people, and the first to send out hints that we go snuggle at the tv in the evening. But by nature, terriers can come with a few built-in extras that aren’t automatically as desirable in “pet” life. Terriers were bred to guard resources, for example, and it is a trait that can be largely minimized with good foundation training, but it is also a trait that can be triggered badly by us when we aren’t aware of how to act around our dogs.

When Miles was younger, he could go from 0 to 60 in an instant if he got a hold of something he wanted, or found a forbidden area. One moment, he was a sweet little puppy, the next, a clenched ball of muscular fury, staring at me with the eyes of a rabid wolf. All instances were triggered by a combination of Miles’ lack of terrier specific foundation training, and because those around him didn’t know how to react. It can be scary when a little pup acts like a feral raccoon, and it isn’t surprising me react with fear and instability! 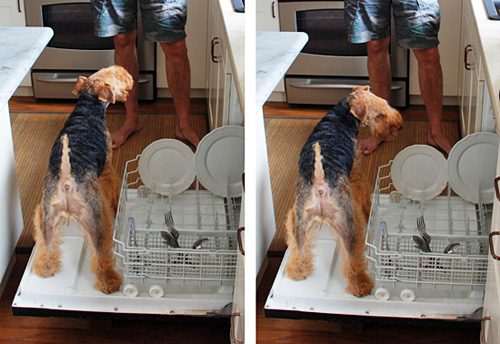 Miles used to guard the dishwasher. He was terrified of the clanking of the dishes and how unexpectedly it would burst out of the wall(!), and my best guess is that he wanted to protect us from it (I can’t claim to really know what he was thinking).

The natural human inclination in such a situation is to lunge at the dog and try to snatch the item away, or to abruptly move them away from the area they are guarding. We tend to resort to desperate behavior pretty quickly, especially because half the time the dog has gotten into something that could cause them harm. In situations like this, you are going to have to take a deep breath, put on your happy face, and pretend you are calm even if you are frightened, frustrated, or angry. Punishment, knee-jerk reactions, frantic screaming, and/or desperate begging will only escalate the situation. The dog is already worked up and reactive, so the goal is not to do the same in return. You can lessen their anxiety by controlling your own. Take a second to compose yourself.

I do not believe methods for dealing with this sort of behavior should be about being dominant, breaking anyone’s “spirit,” or winning some sort of wrestling match. It is just about being the calm in the storm — being your dog’s safe place. You are their guardian, and in their eyes, you should always seem like you know what to do. Believe me, if you consistently exude calm during these moments, your dog will become calmer themselves. Even a terrier!

So what do you do if your dog snaps into a feral alter-ego over something? Be calm, and think ahead. Your goal is to be a positive outside force, to simply re-direct their focus, and finally to praise them for snapping back to their pleasant normal self. Dogs are always trying to figure out what we want from them, so make sure they really know when you are pleased with a positive shift in their behavior. 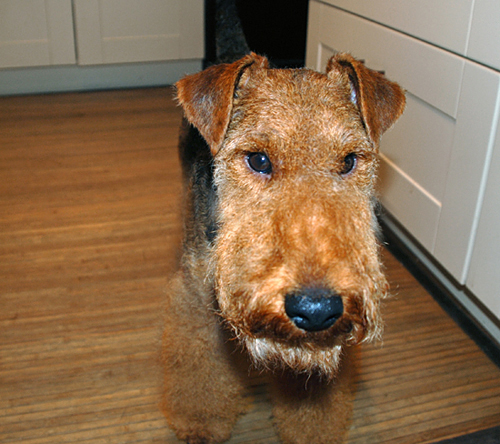 Relax your body, and say silly things in a relaxed cheerful voice like “oh, that isn’t a big deal.” More for yourself, than for the dog! Deep breaths help!

Avoid sudden movements or lunging into the dog’s personal space. Sudden movements will be seen as extremely unpredictable, and will not build the trust or calm environment you are working to achieve.

Also try your best to avoid acting overly fearful or timid. One of the biggest mistakes people make is that they will try to be brave and bolt towards the dog, then suddenly jerk away when they lose confidence, and repeat the process over and over. Since we don’t speak the same language as our dogs — try to imagine you are walking down the street, and suddenly someone starts jerking towards you, then away, yelling nonsense. I live in the city and this never gets less worrisome. Even though the city I live in is really safe, I always panic and wonder if they have a knife! This will work the dog up even more, because to them, you are showing that you are incredibly unpredictable. From their perspective, you are acting irrationally, and for all they know, you could randomly attack. This sort of behavior will have your dog more on guard than ever, and in return, they too will become more anxious and unpredictable.

If you can be calm, you can break the spell and move their attention towards something positive. That can be their favorite squeaky toy, or being cheerfully instructed to do something as simple as “sit,” and wait for a little reward for listening to your request. I truly believe dogs want a calm happy environment just as much as people do. The anticipation of fun often will be enough to break their concentration and snap them back to reality.

Over time, if you show your dog that you are relaxed and predictable, you will not only be in the best possible position to deal with such situations — you will lessen their occurrence all together. If you think ahead and act like it isn’t a big deal, your dog will learn to think that it isn’t a big deal either. The more relaxed and predictable you are, the more your dog will also be in return.

By Sea Land and Air We Prosper