Last weekend had its ups and downs.

On Saturday, Miles and I attended an agility trial. I had a voucher for free day’s entry, and although I felt awful, I made the last minute decision to go. I got up early and roused Miles, who gave me a skeptical look as we dragged ourselves into the car just shy of 7 am. I’ve been sick for what seems like forever, so Miles and I have been cooped up with little exercise over the last few weeks.

We drove for over an hour, which in my sick state seemed like an eternity, finally arriving at the furthest away agility venue of our area.

On top of me already being [too] sick [to be there], I began to notice that Miles was feeling off too. Soon enough, it was clear: Miles was also sick. His stomach wasn’t right, and he seemed to be having an allergic reaction too. It was also incredibly hot and muggy in the barn. And on a good day, heat drags Miles down. On a bad day? He can barely move.

Miles has a lot of agility friends, and they all noticed how off he seemed. That was all I needed to excuse myself, given how much worse for wear I already felt. We both squinted as we plopped ourselves into our sweltering black car. The thought of digging out the map or my often inaccurate cellphone GPS was way too much hassle, so, I just got us in and buckled, and we hit the road. I set the A/C to full blast, but it was so hot out, it wasn’t making enough of a dent, and Miles was feverishly panting. My own head felt very dizzy. My mind was stuck on a loop of: “This is crazy.” I felt guilty for Miles who was by now feeling really crummy and very hot, and I felt worried about my own state, given how I now had to do the long drive home. I was distracted in my thoughts, and soon enough, we were nowhere near any sign of a highway exit. We were lost in a endless labyrinth of sun blazed burnt yellow grass twisty turny country roads. Having grown up in a place of such country roads, I knew how dangerous they can be, and forced myself to focus. I finally found the highway a half hour later. Once back in the city, on a steep hill in start-stop traffic, my foot shifted from the clutch to the gas, and without warning, my flip-flop broke, jamming itself across the gas, clutch, and the brake. Miraculously, I was able to get my feet back in position fast enough to prevent us from rolling backwards and into the car behind us. I got us home, driving awkwardly but carefully with bare feet. What a day!

We went to the vet and then home. Miles was diagnosed with an overgrowth of bacteria in his stomach and an allergic reaction on his skin, and was set up with medications.

I woke up early on Sunday morning feeling worse than ever. I looked at my calendar. I had been sick for a month. And clearly, I was not getting any better. You know I don’t feel well when my aversion to the doctor is overruled by how sick I feel. I jerked out of bed, left Miles to sleep in, which he was very happy to do, and got myself to the only open walk-in clinic in our area. Three hours later – of course, only one doctor was in that Sunday morning – I left with an initial diagnoses of very bad long-running bronchitis, a prescription for two puffers, and, an appointment to get my lungs x-rayed first thing Monday morning. I was in rough shape and the doctor eyed me with surprise when I said I’d been like this for a month. I didn’t tell him about the two agility trials I had done in the scorching heat in that time. I have been alternating between working on my laptop from my couch and bed, and doing agility…

The whole story sort of reeks of machismo and addiction, doesn’t it?
(Take this as a warning about agility, if it isn’t already too late for you!)

When I got home, Miles was quite perky having had 12 hours of meds and nearly the same number of hours of sleep… While I was feeling pretty dang sick and tired, but also, frustrated and stir-crazy.

I had expected to be at the trial again that day, so earlier in the week, I had turned down an invitation to go and participate in a agility demo with my training center. It was a great cause – agility demos at a massive one-day fundraiser event being thrown for the city’s ASPCA to fight animal cruelty. I just read that the fundraiser made 200,000 dollars for animals in need – in that ONE day!

Being the crazy person I am, I thought, to heck with it! I am not able to do the trial, so, lets do one last fling before I actually focus on recovering! The main selling point was that Miles was physically cleared by our trusted vet (even though Miles was technically quite sick, our vet assured me this event wouldn’t hurt his recovery), and I knew that the little blast would be the perfect pick-me-up for Miles’ agility life, given the day we had before, which was a real bummer for him.

So, we rushed to the site of the demo, and perfect timing, it had already begin. We wove through the thick crowd and found the volunteer area. Seconds later, we were in the ring running a course for a huge crowd of people and families, all with their bodies snug against the ring. The crowd was exuberant and wild, and the cheering was deafening!

Miles was in heaven.

Even sick, even tired, he whipped around the ring, performing each obstacle with precision and gusto. His eyes were wide, tail up, mouth wide open in a comically blissful grin. He was truly in his element. After completing the course, Miles pranced out of the ring, absorbing the praise of the huge crowd. We headed home right after, and we’ve been resting ever since. Well, mostly I have been resting, with the exception of what seems like a barrage of medical tests for my poor lungs. Miles’ medications kicked in really fast, so, he has been alternating between napping next to me as I work, and being on high-alert guard-dog duty. You know, against things like evil white kitties, and loud obnoxious garbage trucks. Those are the kind of things worth barking about.

At the event my friend and talented photographer Shelley Dubé captured the joy on Miles’ face as he showed off for the crowd. This is now my favorite picture of Miles doing agility. 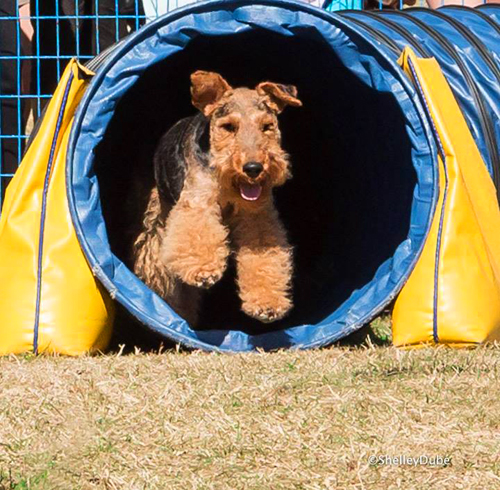 { Miles in his element: doing agility for a huge
and cheering crowd. Photo by Shelley Dubé }
ShareTweetPinSend