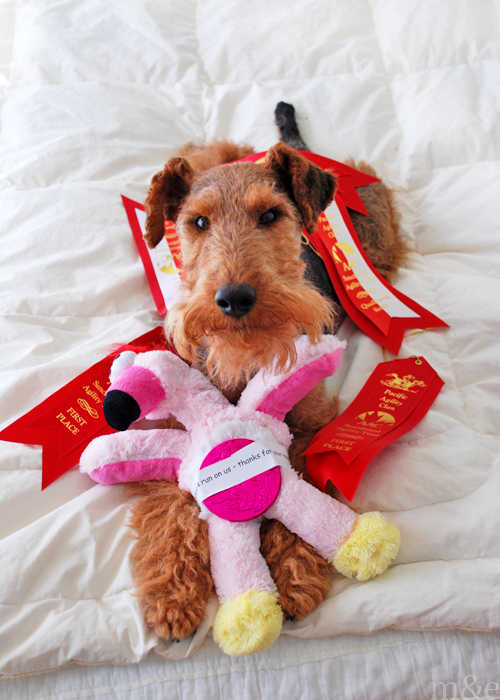 Last weekend, we had our best agility trial yet. Pretty much every run we did was better than usual, and we got three Q’s and three 1st placements! When we were in the Starter’s level, we got two Q’s a few times. But three Q’s at one trial, and in Advanced level no less? That is a first! 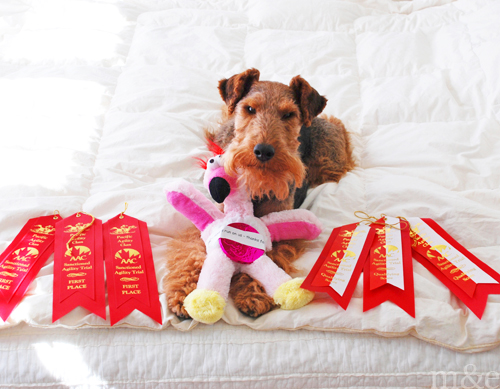 At the end of last year, we successfully completed clean runs in all Starter’s level competitive agility classes, and moved up into the Advanced level in the competition ring. It was a hard-earned move up.. Oh so hard-earned! { Read about that here }

This year, the biggest challenge so far has been figuring out how to “up” our training routine in order to continue improving. Miles and I live in an urban environment, where barn-based agility is non-existent. These places, where almost all of our competitors train, and where competitions are held, are all an hour or more away. Since the beginning, Miles and I have been going to the same local training facility. Our classroom is big by urban standards, but small by competition standards. At the end of last year, I knew it was time to switch things up and throw bit of extra perspective into the mix. Ultimately for now I decided to make two changes: I started going to class with our long time instructor on a different day with different classmates, and additionally, to add an extra weekly class with a brand new instructor.
The first few classes with our new teacher were tough. Our new teacher is an active and successful competitor, and immediately, she picked up on some major areas in need of improvement for me and Miles. Well mostly for me, as I am the one instructing Miles. The biggest thing she noticed right off the bat was that I was not running with Miles. I was slow, and I hung back a lot. Given that we practice in a smaller space, it isn’t surprising I’d get used to running less and less as we got better. The better Miles was getting, the more natural it seemed for me to not need to move with him. Mary helped break that pattern the first class we did. She helped me see that it shouldn’t matter what size space we are practicing in — I need to be moving how I would in a competition! Me being slow and hanging back has worked okay for Miles’ Gamblers skills, but it halted our improvement in every other way, and was not so great for all of the other classes in agility, especially Jumpers. We have struggled in competitions with Jumpers. In Jumpers, there are no contact obstacles to slow the dog down. Now that we are in the Advanced level, a slight wrong turn or twirl from the dog (due to the handler being too slow to catch up to them, and/or too slow to give clear signals) means a no-Q. Competition space is big, and obstacles are far apart. In order to avoid your dog getting confused as they zip through a Jumpers course, if you can, you gotta run! Quite simply — you as the handler need to be on it, move fast, and give very clear smooth signals while you are moving with  your dog. At first, learning how to do that (to run fast, to switch sides often, and signal smoothly) is basically like trying to rub your belly and scratch your head at the same time while steering a unicycle through traffic. It wasn’t an easy thing to get the hang of! My new teacher is working with me on a variety of hand/arm signals, and incorporating them smoothly and clearly while running fast with and/or ahead of the dog, and switching sides a lot. The first three classes, I felt totally incompetent.

On top of that, during that time, I did a drop-in with the most in-demand instructor in my general area. This woman is an amazing handler, she trains many of the local judges and top competitors, people travel hours each week to see her, and she has the most ridiculously long waitlist of people trying to get into her classes. Oh and did I mention she is competing at the World Championships this May? I only got the drop-in because my good friend has been peskily asking her if I can drop in forever, and that day, one of the students was going to be absent. I had an hour notice that I could do the drop-in, and the drive to the class was an hour. I dropped all of my plans and jumped on the opportunity. Well? That drop-in was one of the most embarrassing hours of my life. The second I took Miles’ leash off, he took off across the barn to sniff a bitch in heat that was practicing at the back of the barn. This happened three times, after which the instructor tried to talk to me about practicing our sit-stay. (We’ve worked so hard on our sit-stay, and Miles’ sit-stay at trials is great.) Then, at the end of our first turn, I slipped and fell horribly. The kind of fall where one moment, you are standing, the next, body slam man down. It was physically very painful, but emotionally, it was on another level. I just remember re-gaining my focus from the horizontal position, only to see Miles rushing off to attempt to mount the instructor’s dog. After I got my footing back, and caught Miles, I took him outside for a pee on the cold thick blanket of snow. While out there in the darkness, I took in a deep breath of the icy cold winter air. I then walked briskly and quietly back into the barn to sit down in my chair. No sooner had my derrière hit the plastic seat, than smash, the entire thing shattered into a million pieces, and my ass was flat out on the dirt floor, again. The sound had been ear-shattering, echoing through the barn, and naturally, the barn full of people and dogs went silent. People rushed to check if I was okay (again) and to help me up (again). “Really?” I thought to myself, “What will happen next? Will I be struck by lightning?” When you want something that badly, madness is sure to ensue. I should have known that.

I was feeling pretty overwhelmed and intimidated by all of this humilation and critique, and by the intensive new moves that I was worried I wouldn’t be able to learn. It was all a shock to the system. But somehow, the terror of it all just motivated me, and I worked my (sore) butt to absorb and learn everything. “Just. Keep. Going. Just keep going!!”
And to my astonishment? We prevailed. Trying new things and going out of your comfort zone is hard, and damn scary. And as I proved, doing so can be a massive test to one’s self-confidence. The adjustment period, the fear of trying new things, the initial flailing, falling, the embarrassment that comes from trying new things and struggling…
…It was all worth it. Really, it was all worth it.
Now, on Wednesdays, we go to class for an hour with our new instructor and learn short precise segments on repeat until my brain is fried. Then on Fridays, we get to practice what we’ve learned on a full course, and I get feedback from our long-time instructor about how we are executing the new moves. She has a good eye. (She’s a judge, after all). It is all coming together, and I couldn’t be happier (or more tired). And of course, Miles is in heaven, going to class twice a week. I think our current routine is a great mix. We have the instructor who has mentored us through thick & thin to guide us, plus, we have a fresh set of eyes to whip us into shape.
This weekend was the first time I got to try out my new handling at a trial. The biggest changes were me running more, smoother hand motions, and lots of planned “crosses.” I’ve been progressively getting better at crosses for some time, but the addition of practicing running fast while doing crosses was clearly crucial for our advancement. I was really excited (and a tad bit nervous) when walking the final Jumpers course, to see that I had a different “cross” planned for the beginning of the run than many of the other handlers. When our turn came, the gutsy move paid off. It was the best Jumpers run we’ve ever done, and it was by far the best competitive run we’ve ever done. Miles ran slower than normal, because he was so focused on my instructions. He cared about all of my instructions! I gave clear instructions! I kept up, he watched me! We were really “on” as a team. We were in synch, and Miles was having fun and truly cared about doing it right. In the future, if we keep this up, it will become more second nature, and I know Miles will be faster. For now, I am liking this new more controlled slower Miles! After the run, he pranced out of the ring, so proud that he’d done so well. He KNEW he had done well. In the past, if we did well, Miles would be frantically excited, as if to say, “I did it, I was scared I wouldn’t do it but I did!” This time, Miles had this strong secure air of confidence.
This fits my theory, that even dogs that aren’t naturally “in synch” with humans, like Welsh terriers… They want so badly to do well. They just need really clear guidance and communication from us as to what we want from them. Even when a dog does sometimes succeed on unclear directions, they still are left feeling anxious, because underneath the accomplishment still lies uncertainty. The sort of success that comes from clear communication allows the dog to understand what they did, how they did it, and finally, to be able to celebrate what they did. That is true teamwork.
And nothing feels better than beginning to get there.
ShareTweetPinSend