The Dogs of Star Trek

I thought it would be fun to do a retrospective of the most memorable dogs to appear in the various Star Trek series. From beloved companions of captains and Klingon warriors, to wild alien creatures, and sly shape-shifters, there are some great moments featuring dogs (and sometimes very fictional “dogs”) in each series.

Something goes horribly awry with the ship’s transporter, causing it to beam back two versions of each life form: one good and one evil. This is probably the most memorable use of a dog on a Star Trek episode. The dog actor in this episode portrays an “alien animal specimen,” and ultimately, embodies the epitome of Star Trek camp. 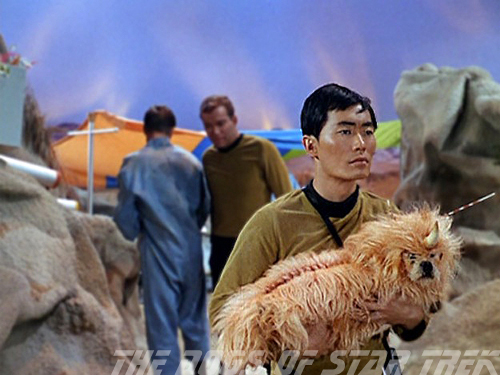 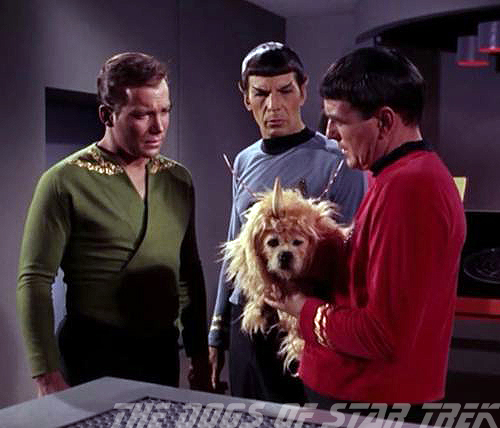 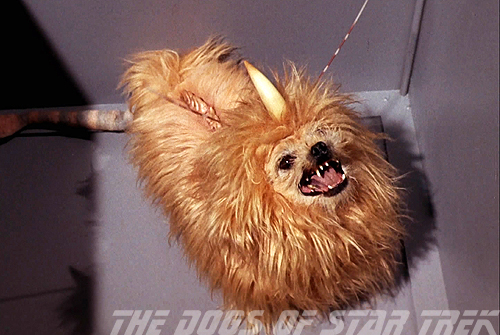 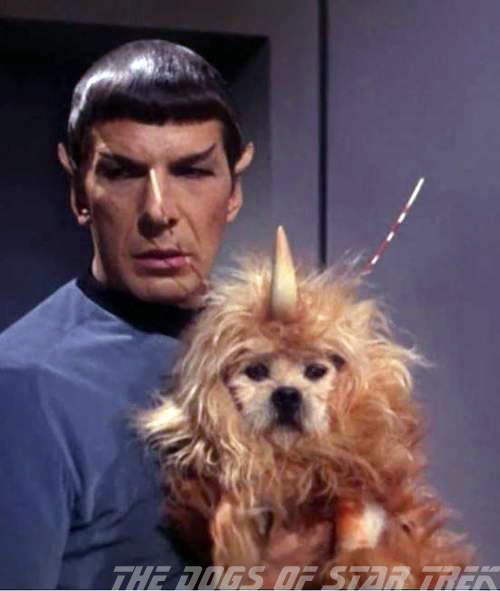 This episode is burned into my memory as containing the one and only tv moment to deeply traumatize my little sister. In this episode, ship engineer Geordi grows close to the prime suspect in a murder investigation. Spoiler: it turns out, her dog is host to a body-snatching alien organism, who is the true killer. Geordi witnesses the dog morph into the alien’s natural blob-like state, which then proceeds to attack him. I guess the idea of a cute dog suddenly morphing into a murderous blob really hit a nerve with my then 6-year-old sister. The dog in this episode was played by Friday, a terrier mix. 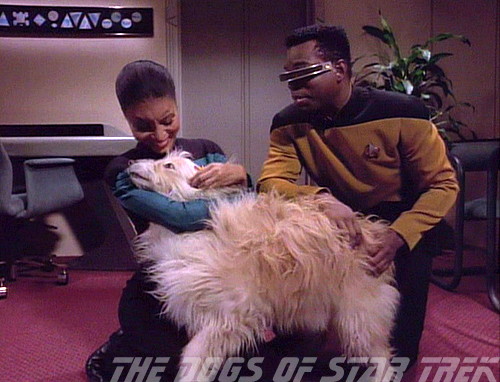 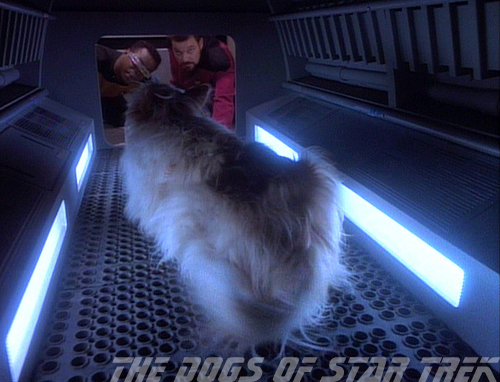 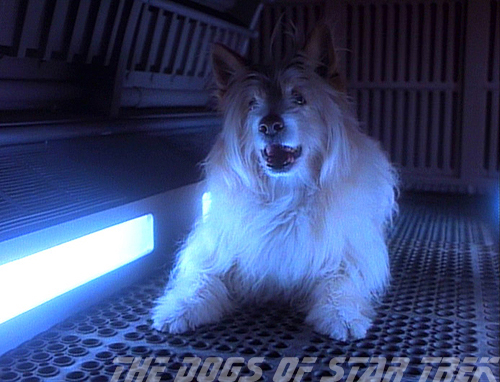 In the Star Trek movie “Generations,” Captain Kirk is transported into the “Nexus,” which is an energy ribbon that allows those who enter it to transcend time. Kirk is able to re-visit loved ones from his past, including his wife, his children, and his beloved great dane Butler. During the filming of the movie William Shatner apparently requested that Kirk’s dog be called Butler, because he had recently lost his own dog of that name. Spoiler: The scene with Kirk and Butler occurs shortly before his death. 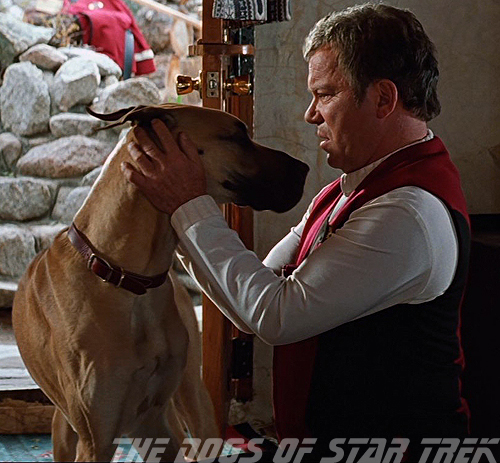 In this episode, Odo, a changeling and the security chief of Deep Space Nine, spies on questionable Ferengi business meetings multiple times by taking the form of a German Shepard. 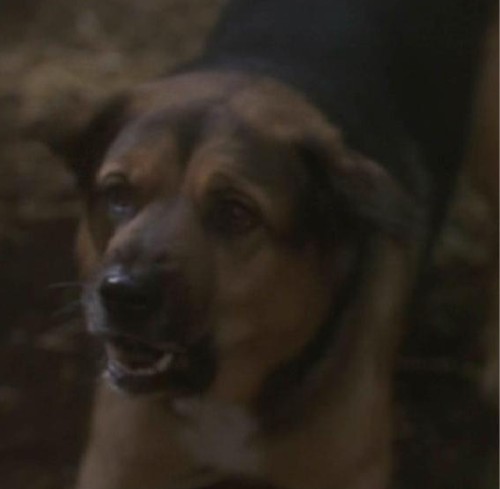 On Star Trek: Voyager (1995-2001), Captain Janeway frequently made references to her dog Mollie, who was an Irish Setter. On Star Trek: Enterprise (2001-2005), Captain Jonathan Archer’s Beagle Porthos makes many appearances. Many other canine companions are also mentioned throughout Enterprise.

And finally, although they are not technically dogs, I can’t omit the Klingon dog-like Targs. Although Targs are also hunted by Klingons for sport and food, many prominent Klingons have fond memories of these boar-like beasts as highly valued pets and companions. General Martok once said his Targ was “a filthy, mangy beast, but in his bony breast beat the heart of a warrior.” Worf (below) also mentioned having had a Targ as a child. 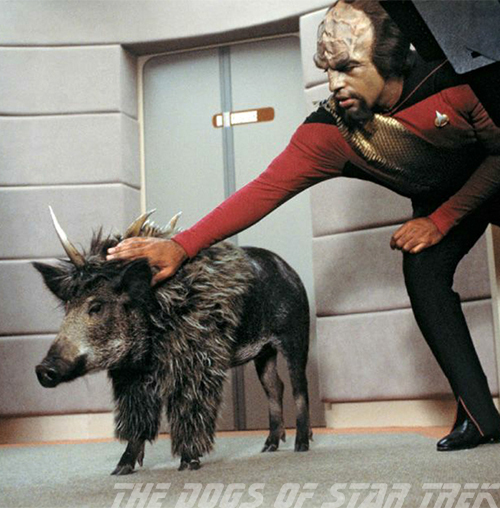 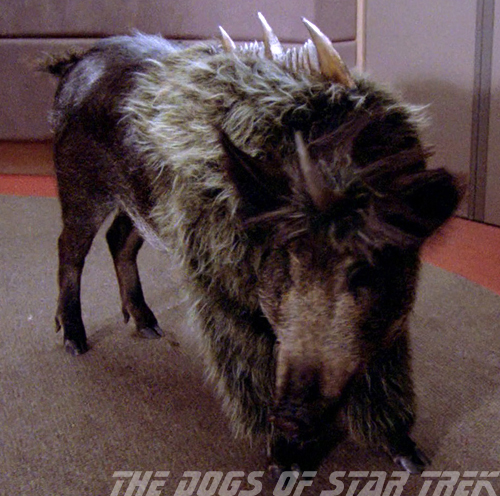 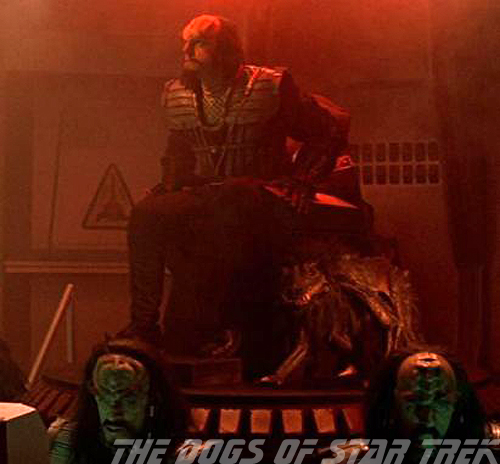 …Do you have memories of the dogs of Star Trek? Although these moments were few and far between, they stand out in my memory. And, as a side note, I definitely think of myself and Miles as being akin to Klingon and Targ.