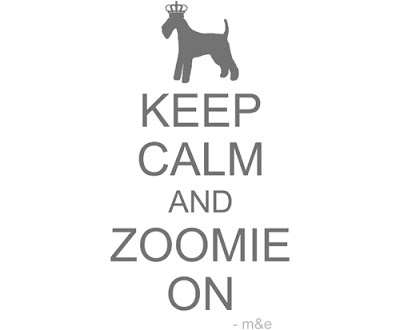 A few weeks ago we had a great time at our 4th agility fun match. The organizer of the match suggested we come back the following week for our first real trial. Our teacher Nicole also said it was time to “get our feet wet” and do a real competition. I took the plunge quickly, like diving into cold water, and sent in the registration forms.

Good luck charm secured, I asked my dad if he would like to come. My dad was there with me through the early stages of my dog-training experiences, starting when I was just 7 years old. He drove me to puppy class and then obedience classes, both where he gave me the confidence to be the only child handler, by sitting back, smiling encouragingly and watching for the full hour. He drove me to 4-H for years, again, always offering his quiet encouragement and support. When I was about 10 years old, he came to watch me and our Cocker Spaniel compete in a 4-H obedience trial at the County Fair. Cinnamon and I had worked so hard together. So there we were, out there in the ring. I followed the judge’s requests, carefully aware of what we needed to do. Cinnamon’s flowing ears were slightly raised, listening attentively to my commands. Despite being a total maniac most of the time, Cinnamon was performing off-lead on an unfenced area of lawn for a large crowd. In blistering heat, no less! Halfway through our routine, I was in my zone, and Cinnamon was 100% focused. My father was bursting with pride. He couldn’t help himself. He loudly blurted out “Go Cinnamon and Emma!” The moment broke. Cinnamon heard his name, and our beloved father’s voice. He bolted and ran to my dad. It was over. Flash forward many years? My dad was more than ready to join us at 6am on a very rare day off to offer his support.

I had signed us up to do only three runs. Usually at a Fun Match I will sign us up for 4-6 runs. We are now in the Starter’s level, aka the beginners level! Unfortunately, traveling in a group of three caused us to be late. LATE. As a Starters dog, had I been there on time, Miles would have been able to attend “course familiarization,” where he would have gotten to do a few obstacles to get a feel for them. In addition, due to being late, I was not able to walk our first course. 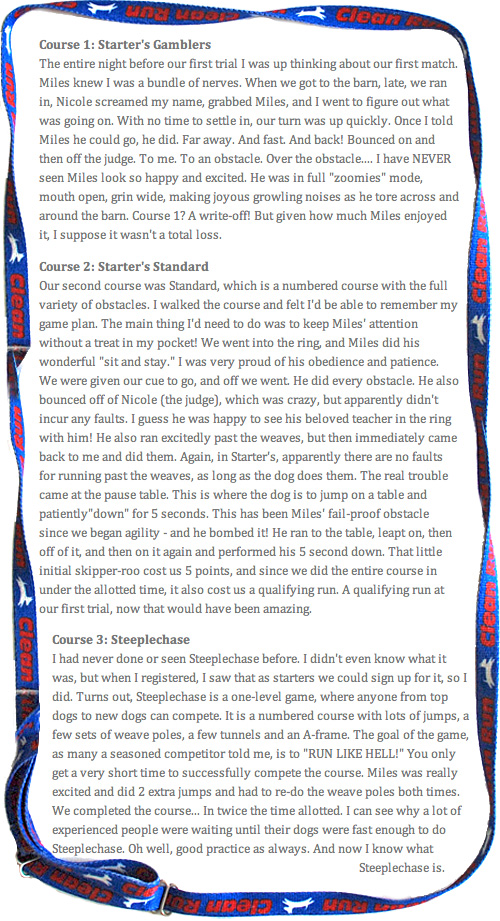 In human-dog years, Miles and I are the same age right now (although I am often told I am like a 12 year old boy and Miles is often compared to a crazy puppy). So not only are we the same “age,” but we are also similar in personality in certain ways. How wonderful that at this stage of being so equally matched, we would get to a place I never dreamed we would. Our first agility trial.
ShareTweetPinSend