Seven years ago, the famous Westminster Kennel Club added agility to their event program every February in NYC. The agility component of the show has been a smashing success with fans, with widespread television and media coverage and sold-out stands.

{ Above: The footage of Miles competing at the Masters Agility Championship at Westminster! } 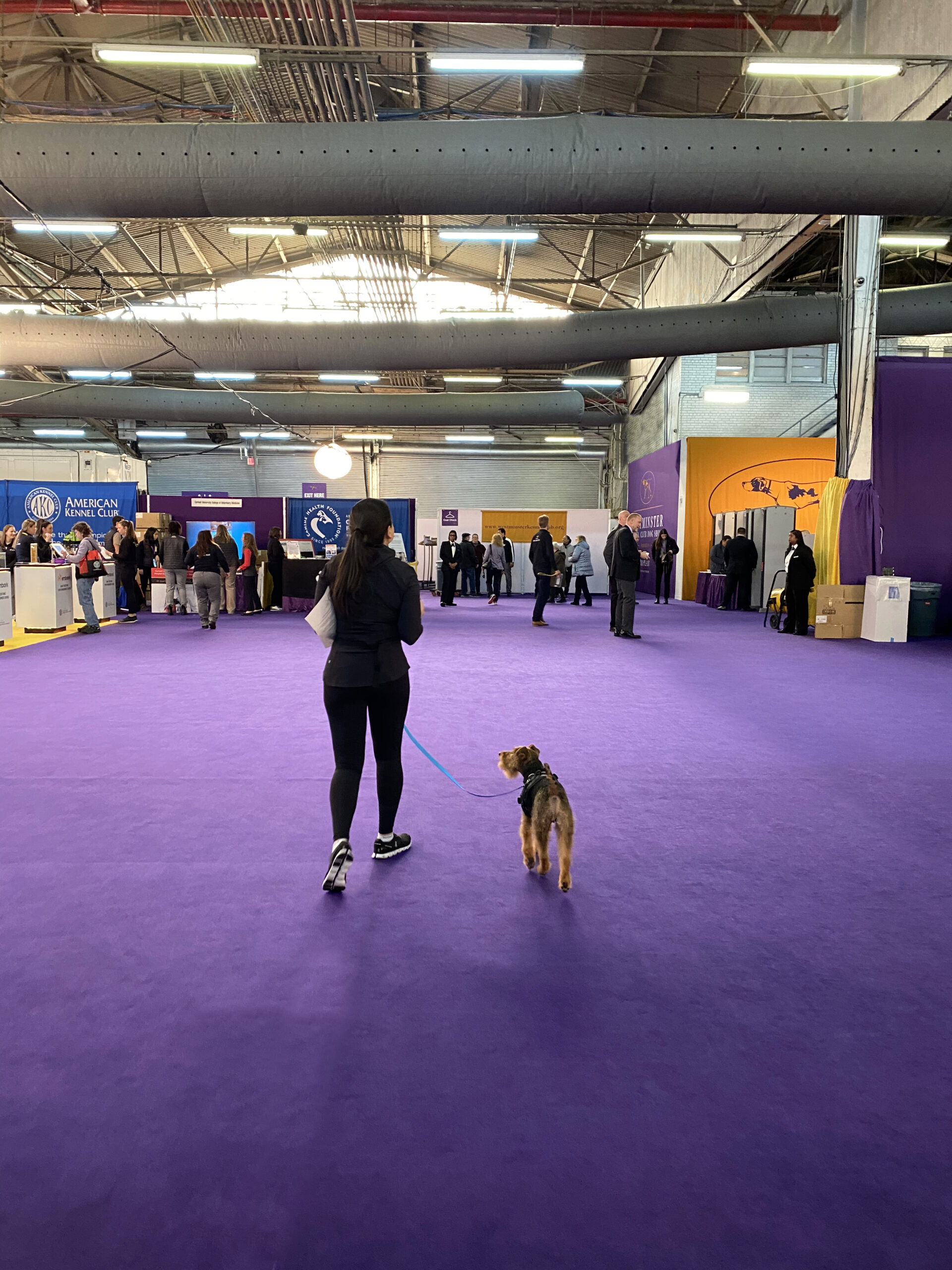 Miles and I on the purple carpet of Westminster, photo by D. Yates.

Our Road to Westminster

Every team at the Masters Agility Championship at Westminster has a different story of teamwork and personal courage. The following is our story.

Welsh Terriers are not considered an easy breed to train. After the event, I met someone who has been prominently involved with the breed for a long time. When he learned that we had competed in the agility portion of the show, he said, “Miles must be very atypical in temperament for a Welsh Terrier to be able to do that.” The truth is, if Miles hadn’t been one of the most “full-strength” Welsh Terriers I’ve ever met, I don’t think we would have ended up being the first team to represent the breed at Westminster agility. In that moment, years flashed by in my mind. The day that a veterinarian told me that my puppy was “behaviorally not right” and needed professional help. The multiple local dog trainers who told me, without words, that my puppy’s (natural, full-strength terrier) behaviors were outside of their scope. The day I decided to go the path of training Miles alone. The years of agility where Miles was wild and unfocused, and fellow competitors would ask, “how do you do that with a smile?” The years I put in with Miles, focused on him, learned from him. The subsequent years as a coach that I’ve enjoyed helping others lead wonderful lives with their own wild, wiry terriers.

For Miles and I, it was our history of overcoming challenges that gave us the courage to compete at an agility event of this magnitude.

When he was very young, instead of focusing on why Miles wasn’t listening to me, I made the choice to listen to him. Miles taught me that it is okay to be a perfectionist and to fail, but that it pays to “fail better.” To a Welsh Terrier, embarrassment is a waste of time, and courage, rather than the absence of failure, is what dignity is made of. Miles taught me the thrill of diving into the brambles and not stopping until you feel the flush of adrenaline that tells you that you’ve made it. Success comes when you have the courage to fail, over and over. Terriers know and appreciate the value of this kind of courage more than anyone. I see Miles’ dignity now, more than ever. He seems to feel understood, and he walks off of the agility course looking as if he is sharing with me the immense pride he takes in his work. 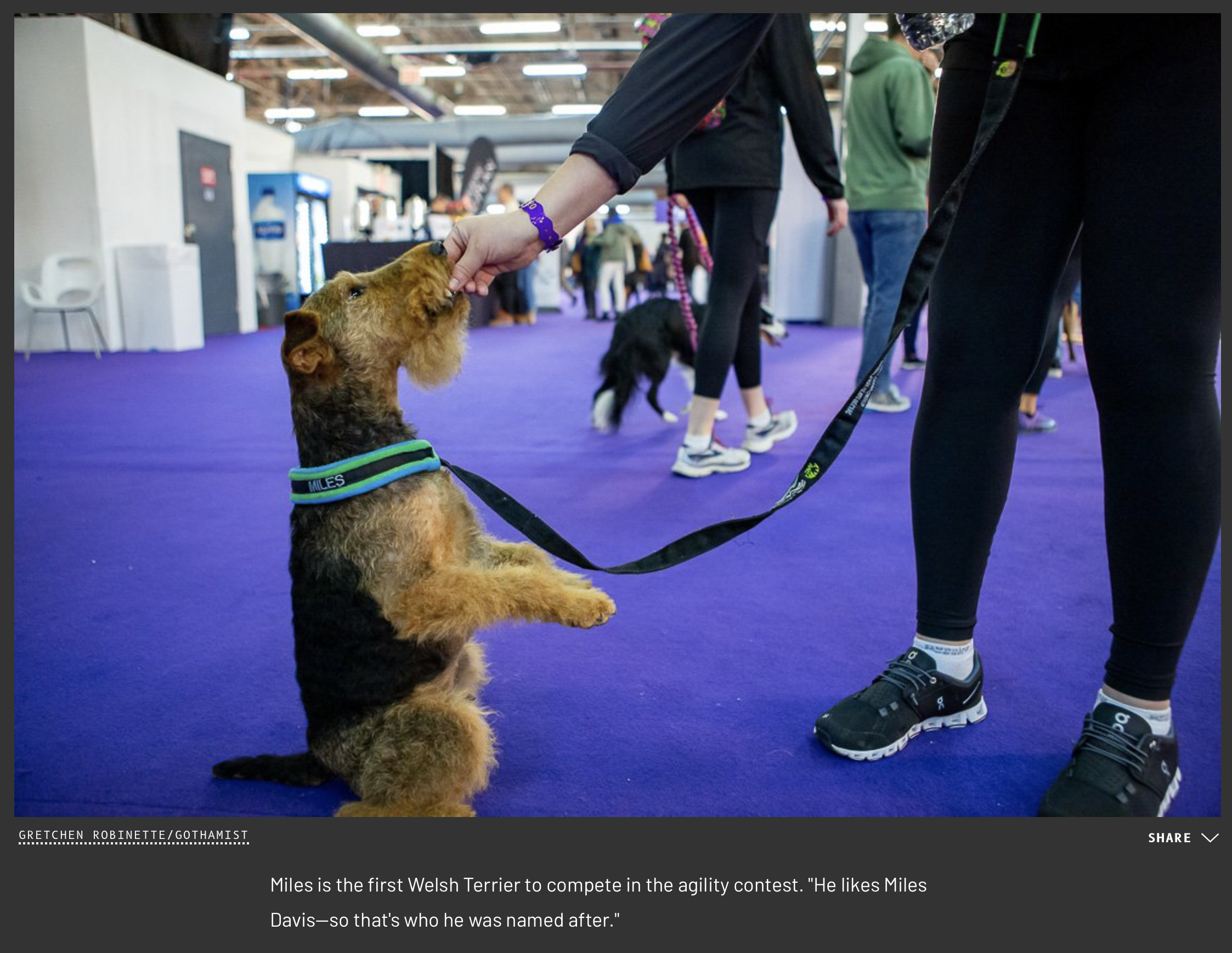 Miles was featured in a news story in The Gothamist by Ben Yakas, interview & photo by Gretchen Robinette.

Westminster, “There’s Only One.”®

When Miles and I arrived on-site, the purple carpet extending far and wide across Pier 94 was so exciting to see, I couldn’t contain my smile, even though it was very early in the morning and the prospect of the day ahead was overwhelming. The fact that Westminster agility is a condensed one-day event cannot be not far from any competitor’s mind as they enter Pier 94 that morning. That became obvious when I saw some looks of anxiety on even the most accomplished faces. Agility is as much a mental game as it is a physical one. Walking the courses, I overheard a few seasoned spectators comment that level of difficulty had increased with this year’s new requirement that only highly titled AKC agility dogs be selected to compete. The courses contained notable traps and technical sequences. These challenges were complemented with a nice sense of flow. I felt exhilarated walking the courses, plotting what route would yield the clearest path for my teammate. 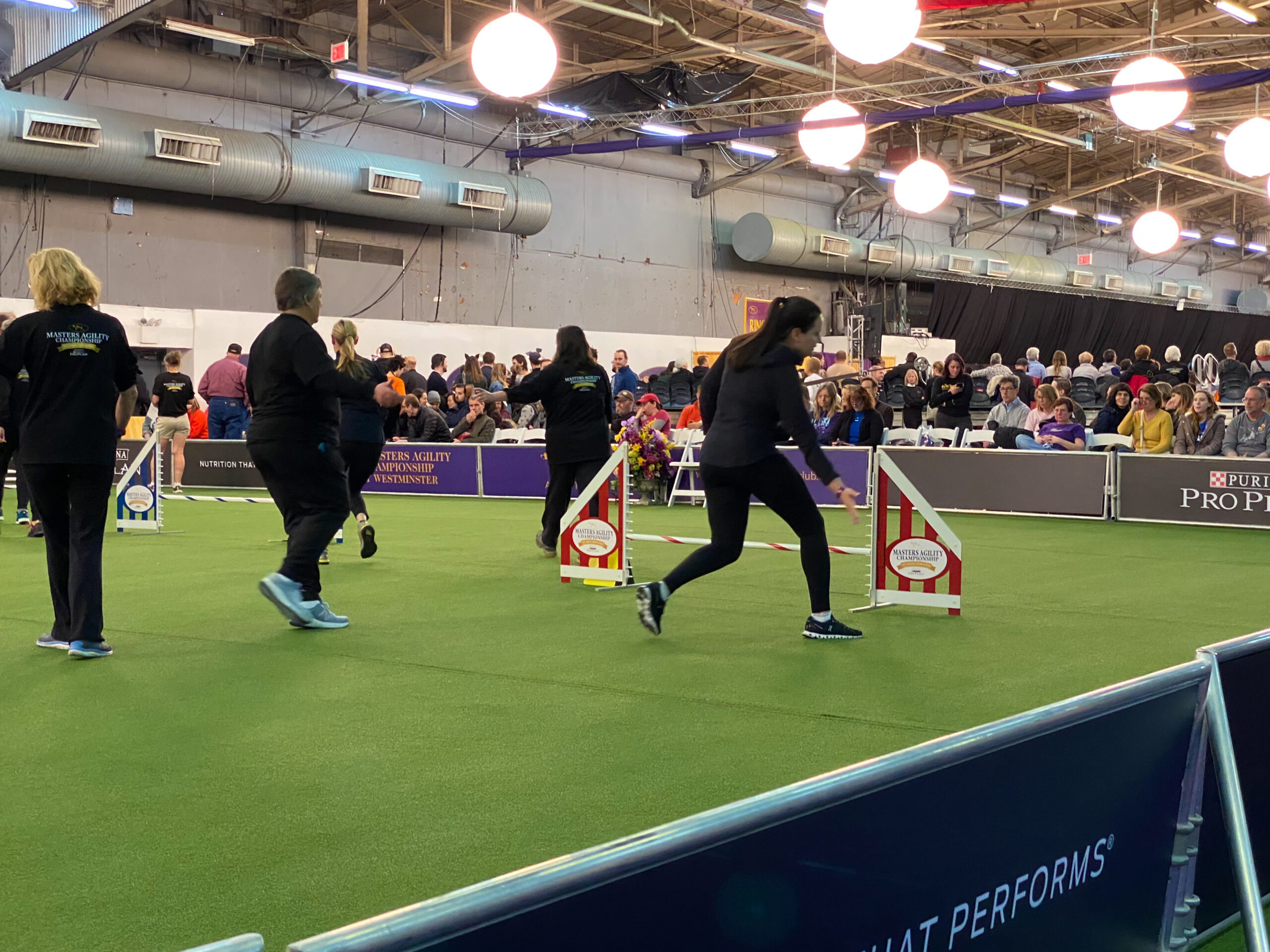 Me practicing a backside send (what is that?) at the Westminster agility walk-through, photo by D. Yates.

Getting to and from the ring was unlike anything I’ve ever experienced at a big agility event. Miles and I walked from the packed crating area and past the sold-out stands to a tight gate area that was bustling with activity. There was very minimal briefing or explanation pertaining to where competitors should go or what they should do, but the event was extremely well organized. It almost gave me a laugh to think of how I have long bemoaned how early people get up to nervously plan at smaller agility events, and at Westminster, things ran smoothly with minimal fuss. Here is a little behind-the-scenes video:

A little behind-the-scenes footage of the event.

For any competitor, regardless of their dog’s breed, it takes immense courage to go to Westminster agility. For Miles and I, the bulk of our courage happened before we stepped onto the famous purple carpet. There is no pretending at Westminster. You get out there, you have your shot, and your dog knows exactly what you are feeling. As Miles and I walked to the ring, children rushed to pet him, and members of the public asked me a flurry of enthusiastic questions. There were seconds to go before we’d need to compose ourselves to enter the ring for our less than minute competing. Cameras would be rolling from all angles. I took in my last breath before entering the ring, and stroked Miles’ chest one last time as I allowed my own chest to exhale. As I walked into the ring with Miles at my side, I felt my body flush with pure, unfiltered excitement and joy. I was ready. I looked into Miles’ eyes. There was no hiding between teammates in this moment. It was in that moment that I knew. We were ready.

I will never forget the brief moment in time that Miles and I shared together in NYC at the 7th Masters Agility Championship at Westminster. We were proud to represent the wild, wiry Welsh Terriers.

Photographs of Miles and me at Westminster, by Bev Thompson.

I would like to extend deep gratitude to Miles’ agility food sponsors Cindy and Rod of Natural Instincts Pet Food for providing Miles’ athletic little body with excellent nutrition.

Special thanks to, in no order: M&E readers always for thoughtful comments, Christine & Laurie for supportive mentoring, Lale & Lori for advice, Casey for coaching MY agility, my family for their belief in my doggie dreams, my clients for their passion and enthusiasm, and to Denise for her above and beyond help before and during the event. Thank you ALL for your belief in us!

How to Make Your Own Dog Treats