by Emma Kesler, CDBC, CPDT-KA
0 0
17
I often talk about the working origins of terrier breeds. Many historically have not spent much time being “house pets.” If you live with or know what I like to call a “full-strength” terrier, this history explains a lot. So what changed in the last 100 years to popularize such dogs? I believe that one dog in particular was given a chance to show his stuff as an unlikely cinematic canine companion, and he alone had an astounding impact on the future of his kind.
… And his name was Asta. 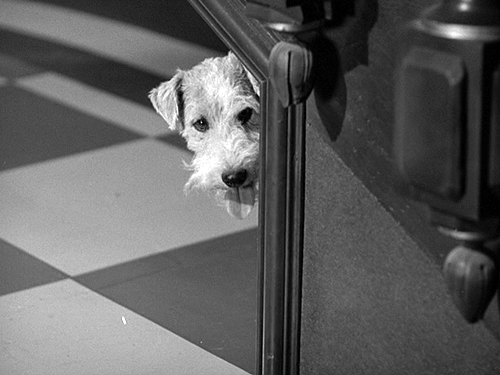 above: Asta in his classic stealth detective’s assistant pose
below: Mr. Charles confers with his wingman over a drink 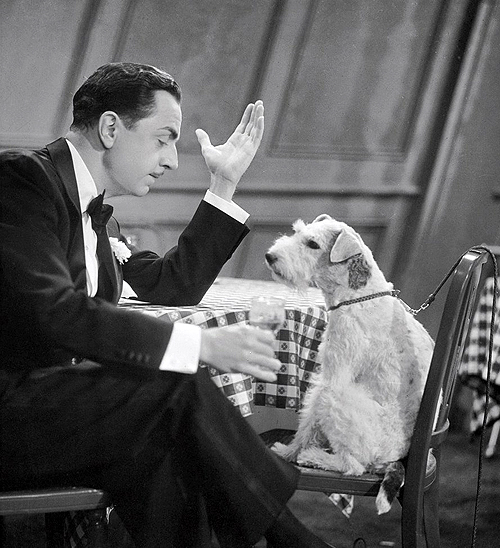 In 1943, the popular book The Thin Man by Dashiell Hammett was adapted into a series of films, which became wildly popular. To this day these films are considered iconic, and continue to receive near-perfect ratings from critics and viewers. These movies are forever on my list of favorites. If you are looking for a quality viewing material this holiday season, look no further. In The Thin Man series, actor William Powell plays retired bad-boy detective Nick Charles, and actress Myrna Loy plays his beautiful and sarcastic socialite wife Nora Charles. These two were the pinnacle of stardom in their time. Loy was and is unbelievably glamourous, and Powell equally handsome and suave. Each film revolves around a situation where Nick is lured back from retirement to solve a dangerous crime, but not without the help of his clever – although inexperienced – wife Nora, and their trusted – although unruly – dog Asta. Highlights of this series are the sharp witty banter between husband and wife, and Asta’s scene-stealing antics. Although a seasoned crime-solving pro, clearly Nick would have be lost without Nora and Asta! 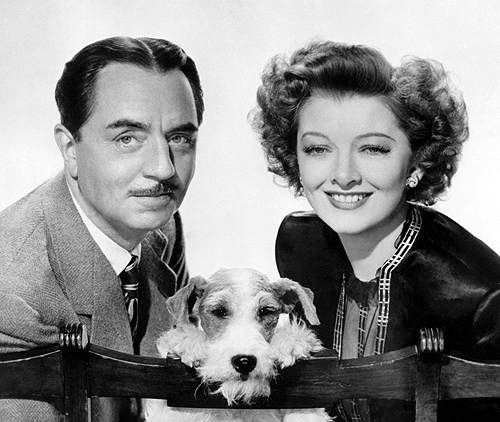 above: Nick (William Powell) Asta (Skippy) and Nora (Myrna Loy)
below: actor William Powell was known to be a great dog lover 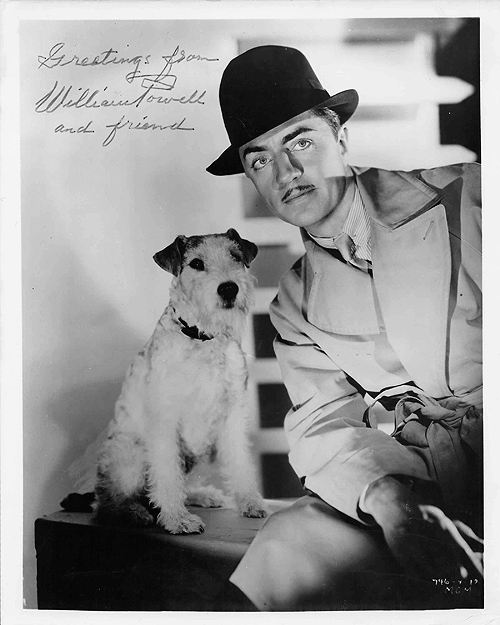 In the original novel, Asta was a female Miniature Schnauzer. For the Hollywood film adaptation, a male Wire Fox terrier named Skippy was chosen to portray Asta. Skippy’s interpretation was so well-recieved, that Asta as a Wire Fox terrier stuck, and Skippy landed many roles in Hollywood films. At a time when most canine actors eared under $20 dollars for week’s work, Skippy took home an average of $250, which was a very impressive paycheque at the time for anyone. When Skippy retired after a fruitful acting career, his Thin Man role was carried on by several other Wire Fox terriers. 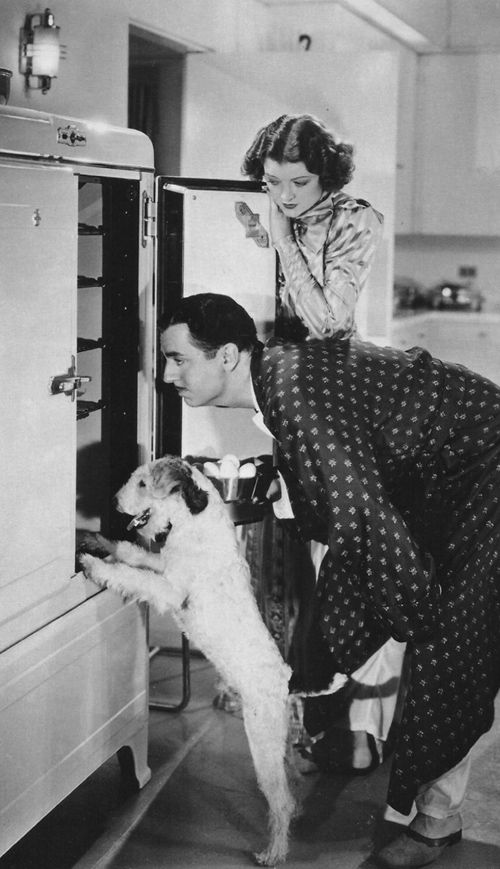 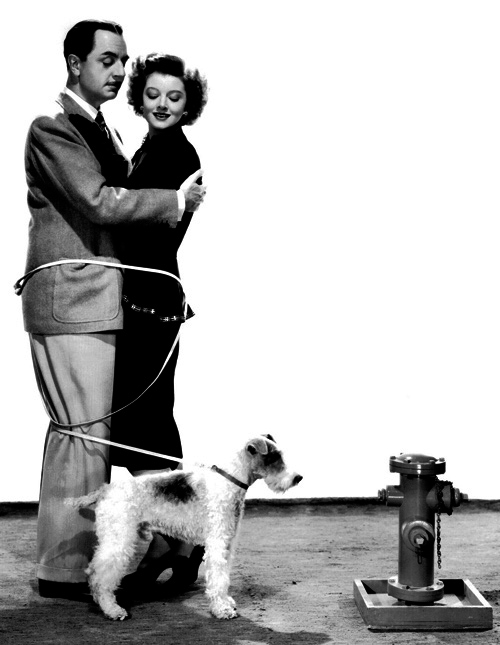 Asta is an interesting dog character historically in film, because true to the terrier spirit, he is shown as being highly perceptive and intelligent, but also mischievous and more often than not, quite unruly. Asta’s rambunctiousness is what made him stand out at the time, and what continues to makes him timelessly irresistible. In these early “talkie” films, having such a scrappy rough-and-tumble dog in the frame was a sharp contrast to the impeccable appearance and amazing fashions of the day’s stars. Not only that, Asta was shown to be a completely respected family member and detective’s assistant, and his instincts are valued by his family. He travels everywhere with Nick and Nora, frequently accompanying them to fancy hotels and restaurants. This was at a time when most dogs including family pets were left strictly outdoors! When Nick and Nora welcome a son to their family, Asta remains just as prominent a family member and character. It is safe to say that Skippy and Astra changed history for their kind by bringing attention to the greater appeal of wild wiry terriers, beyond that of an already treasured working class of dogs.

“Treat a dog kindly and he’ll do anything in the world for you.”
– Skippy (the original Asta)’s owner & trainer Gale Henry East, 1938
Closing note: A driving force behind this website is to educate prospective and current owners of the differences of these breeds. Their sudden rise to popularity in the past century has had its substantial downsides. Since coming into popularity many of these dogs have been bred irresponsibly for the sake of human profit, and have been sold readily to people unaware of their needs. I’d like to urge people to remember that the very characteristics that make dogs like Skippy and Asta so appealingly different are simultaneously what make them unique creatures with very particular needs. These days there are a select group of good breeders out there who are working diligently to preserve and improve bloodlines. Please urge others to research unique breeds before purchasing, and to choose responsible breeders.
Article Copyright © 2012 Miles & Emma
ShareTweetPin499Send
Previous Post